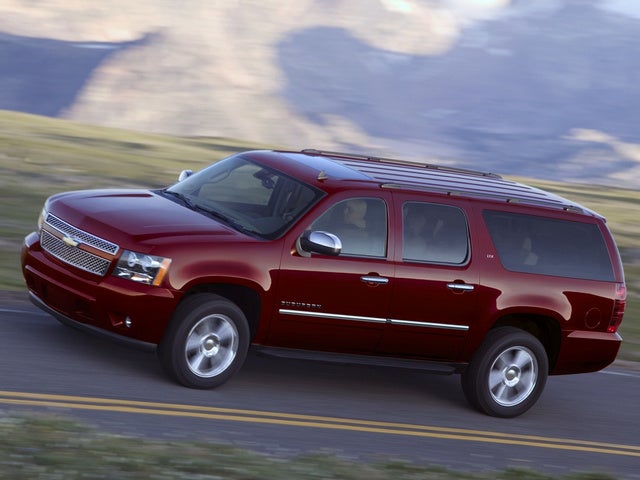 The 2011 Chevrolet Suburban's outsize dimensions allow it to carry nine passengers and all their gear, while its powerful V8 engines make towing a breeze.

Families and business owners who need the space offered by a true full-size SUV would be hard-pressed to find a more capable vehicle than the 2011 Chevrolet Suburban. With payload and tow ratings that match those of many full-size pickups, the 2011 Suburban is an excellent choice for those who pull large trailers. While fuel economy isn't a strong suit (no surprise there), the 2011 Suburban isn't nearly as unwieldy to drive as its size would suggest.

Offered since 1935, the Chevrolet Suburban is the oldest nameplate on the market. Such longevity speaks to the Suburban's incredible talent for hauling passengers and cargo. Indeed the Suburban is one of the most versatile vehicles on the market, able to handle nearly any job it may encounter. The Suburban soldiers on into 2011 with a few minor trim revisions and some new colors.

Chevrolet offers the Suburban in two guises. A half-ton model, called the Suburban 1500, is aimed at large families and light haulers. With its compliant highway ride and (somewhat) nimble demeanor, the Suburban 1500 will provide yeoman service on long trips or while running errands. The three-quarter-ton Suburban 2500 features a much stiffer suspension and a larger engine for serious towing and hauling. Three trim levels are offered, and both half- and three-quarter-ton Suburbans give buyers the option of rear-wheel or four-wheel drive.

With its huge dimensions and insatiable hunger for fuel, the 2011 Suburban is reserved for those who really do need the size and capability a vehicle like this offers. Buyers who are just looking for a third row of seats and four-wheel drive have a number of smaller, cheaper options (including Chevy's own Traverse) that will better meet their needs. But those looking for a real truck that can carry nine passengers on unimproved roads or tow a four-ton horse trailer with ease will find much to like in the 2011 Suburban. 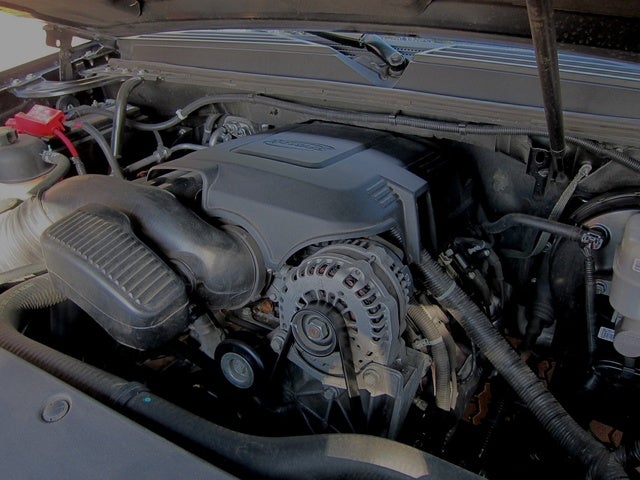 The 2011 Suburban is offered with a pair of gasoline V8 engines. During the Suburban's last redesign (in 2007), the huge 8.1-liter big-block motor was discontinued, leaving two smaller, yet still brawny, Vortec small blocks as the only powertrain choices. Half-ton (1500) Suburbans feature a 5.3-liter V8 motor that generates 320 hp and 335 lb-ft of torque. Despite its old-tech pushrod design, the 5.3-liter offers relatively refined manners and smooth, quiet operation. Though its horsepower and torque numbers might look impressive on paper, buyers should remember that even a rear-wheel-drive Suburban 1500 tips the scales at more than 5,800 pounds. Thus acceleration is adequate, but not exactly thrilling, especially with a full load of passengers. The Suburban 1500 can tow 5,100 pounds (more with the tow package) and carry a 1,354-pound payload.

The 6.0-liter V8 engine that comes standard in the three-quarter-ton Suburban 2500 makes 352 hp and 382 lb-ft of torque. The extra power improves payload capacity to 2,385 pounds and bumps the towing limit to a class-leading 9,600 pounds. Three-quarter-ton Suburbans feature stronger acceleration than their half-ton siblings, especially when fully laden, and deliver a nice throaty exhaust burble. Though the 8.1-liter motor will be missed by some, anyone needing substantially more capacity than the Suburban 2500 offers should consider stepping up to a one-ton pickup truck. While a bigger gas motor isn't needed, Chevrolet's stubborn refusal to offer the Suburban with its excellent Duramax diesel engine is disappointing. Though American consumers haven't fully embraced oil-burners, a vehicle as big as the 'Burban would greatly benefit from the torque and fuel economy of a diesel.

The 2011 Suburban is offered in rear-wheel-drive (RWD) and four-wheel-drive (4WD) guises. 4WD models get an electronically controlled transfer case with an optional low range that is suitable for off-roading, though the Suburban's size precludes serious rock-hopping. All Suburbans get a six-speed automatic transmission. The electronically controlled 6L80 gearbox delivers top-notch shift quality and features a wide ratio spread to maximize fuel economy. On the subject of fuel mileage, it's important to note that the Suburban's legendary thirst means that rear-drive 1500 models manage only 15 mpg in the city and 21 mpg on the highway. Perhaps out of sheer embarrassment (or for fear of a Sierra Club boycott), Chevrolet doesn't publish figures for the Suburban 2500, yet a quick peek at the EPA table reveals that this beefiest of SUVs delivers a paltry 10 mpg in the city and 15 mpg on the highway. Good thing a 31-gallon fuel tank is standard equipment.

Along with it's Ford Expedition and Toyota Sequoia competition, the 2011 Suburban rides on a ladder-type perimeter frame. The Suburban's GMT900 chassis is shared with the Silverado pickup and features hydroformed, box-section frame rails for durability. The Suburban 1500 gets coil springs all around and an independent front suspension that delivers a very poised ride for such a large vehicle. Optional Autoride adaptive damping shocks further improve the Suburban's highway ride and decrease the big truck's tendency to bounce over large bumps. The power-assisted steering is light and relatively quick, though it's rather devoid of feedback.

In order to cope with the demands of serious hauling, the 2011 Suburban 2500 features a heavy-duty suspension with torsion bars up front and traditional leaf springs in back. This arrangement means the Suburban 2500 rides noticeably stiffer than its half-ton siblings. Its rougher ride and larger turning circle make the Suburban 2500 less suited to around-town errand running. An integrated trailer brake controller and optional locking rear differential provide exceptional control while the vehicle is heavily laden. 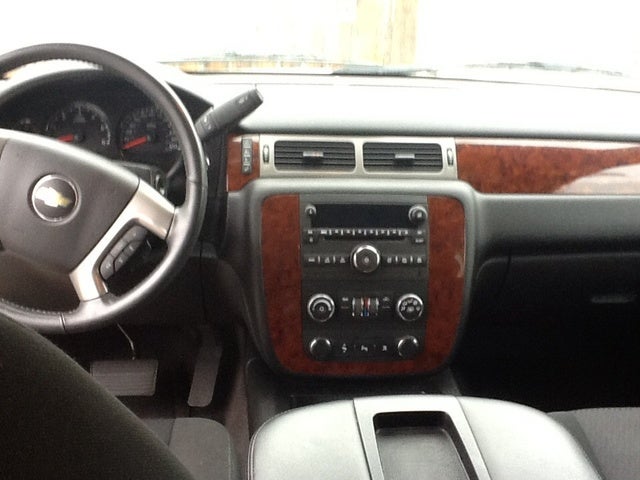 The 2011 Suburban's cavernous interior offers seating for eight or nine passengers in three rows. Leg, head, and shoulder room in all three rows is quite generous, and the SUV's height helps it provide a comfortable, chair-like seating position. The Suburban's 137.4 cubic feet of cargo capacity (including 45.8 cubic feet behind the third row) rule the class and allow owners to carry almost anything.

The Suburban's interior features a fresh, modern design with smooth contours and high-quality materials. The dashboard places all controls within easy reach and has clearly labeled switchgear. A power driver's seat and optional adjustable pedals make finding a comfortable driving position a snap.

Befitting its high base price, the Suburban gets a healthy complement of standard equipment, including power windows, locks, and mirrors, front and rear air conditioning, an AM/FM/CD stereo, and a leather-wrapped steering wheel. Options include leather upholstery, GPS navigation, a power sunroof, and rear seat entertainment. Also available in all trims is a rear-view camera that makes this behemoth much easier to park.

With its high-tech frame and three tons of steel, the 2011 Suburban is a very safe place to be in the event of an accident. A host of standard safety features includes front, side, and curtain airbags, antilock brakes, and OnStar automatic crash response. Keeping the Suburban in line are standard traction and vehicle stability control programs that use the ABS sensors to prevent wheel slip. In NHTSA crash testing the Suburban earned five stars for both driver and passenger in frontal impacts.

Most Suburban owners report loving their truck's excellent cargo and passenger carrying capacity. Though it gets some complaints for roughness, most buyers feel the Suburban rides very well for a large SUV. Several longtime owners feel the most recent Suburban is the best iteration yet, especially inside, where the classy interior receives high marks. However, nearly everyone complains about the Suburban's prodigious appetite for fuel.

What's your take on the 2011 Chevrolet Suburban?

Users ranked 2011 Chevrolet Suburban against other cars which they drove/owned. Each ranking was based on 9 categories. Here is the summary of top rankings.

Have you driven a 2011 Chevrolet Suburban?
Rank This Car

Gas Gauge Goes In And Out

The gas gauge stops working when I erase the code it starts working. The code is P2066. I have changed the main fuel pump.

i have a 2011 surburban with a 5.3 in it the oil pressure starts around normal then after idleing for awhile it starts to drop to around what i would assume to be like 2 or 3 not quite on 0 but real...

Is My Battery Bad Or Is It Something Else?

If you jump.tbr battery it will start and the battery test out good. But when it doesn't start and you turn the key it just clicked, and you out the jumpers on it will fire right up. It was sitting...

On my 2011 suburban just replaced the battery and the radio was working and we went to fix the clock and couldn't so looked it up and found how to do it. Ever since we did that once you start the v...

I HAVE A 2011 CHEVY SUBURBAN AND MY DAYTIME RUNNING LIGHTS ARE NOT COMING ON. I HAVE IT ON AUTO BUT I HAVE TO MANUALLY TURN LIGHTS ON

193 views with 1 answer (last answer about a year ago)