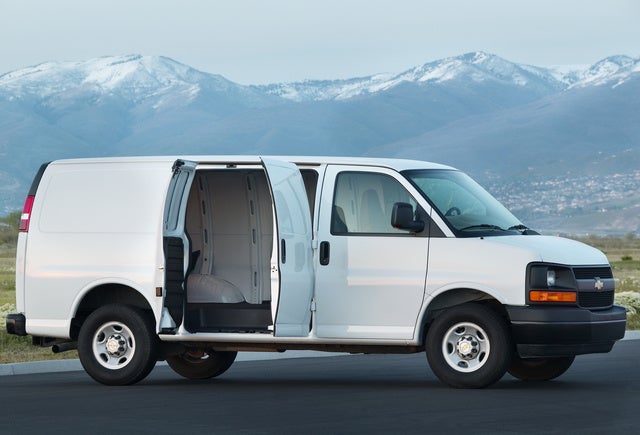 A plethora of potent powerplants, expansive passenger capacity, all-wheel-drive availability, and nearly limitless seating configurations keep the 2011 Chevy Express at the top of its game.

Wallet-whacking mileage figures, a non-negotiable roof height, and the unimaginative use of low-rent cabin materials conspire to limit this hefty hauler’s appeal to the masses.

For those who have to get a lot of people from place to place, the 2011 Chevy Express has what it takes. For those with on a limited fuel budget, however, a minivan would probably be a better choice. Despite a few glitches, in a market that offers few choices, the Express has enough going for it to remain at or near the top of the short list.

Yes, it’s big and boxy, and yes, the look is getting old and stodgy, but the 2011 Chevrolet Express still makes itself useful in carrying lots of people and baggage. This elder statesman of the Chevy fold is in its sixteenth year, and its massive people-hauling capabilities, choice of V8 engines, decent handling characteristics, and overbearing size make it a fitting choice for those who need a full-size van with some giddy-up. Additionally, some new features, like standard OnStar safety, communications, and navigation functions, as well as an optional heavy-duty rear locking differential, the availability of a 4.8-liter V8 engine in the passenger version of the 2500 series, and Bluetooth wireless technology help introduce this big van to the 21st century.

Two trim levels grace the 2011 Express, the base LS and somewhat more posh LT. Both trim levels are offered with the half-ton 1500 series, three-quarter-ton 2500 series, and one-ton 3500 series. All trims are equipped with a standard rear-wheel drivetrain (RWD), however 1500 Series trims are each available with full-time all-wheel drive (AWD), something unique in the world of full-size vans. The 3500 Series, meanwhile, is available in the extended length configuration (Ext.) with a 155-inch wheelbase and up to 15-passenger capacity. Seating capacity in standard-length Express trims remains at eight to twelve passengers. Cargo capacity in the standard length Express trims is some 216 cubic feet with rear seats removed, while the 3500 LS and LT Ext. versions boast just over 237 cubic feet of cargo area.

Major competition in this underrated market includes the Ford E-Series and Mercedes-Benz’s surprisingly well-put-together Sprinter. Though Chevy’s Express entry is a tad more powerful than Ford’s E-Series, it is nevertheless somewhat inferior in utility and build quality to the Sprinter. Neither the Ford nor the Chevy behemoths, of course, approach the raised-roof headroom of the expansive Sprinter.

The 2011 Chevy Express is blessed with no fewer than three gasoline-powered V8 powerplants that are also capable of burning ethanol-based E85 fuel. Two transmissions are also offered with the Express lineup, depending on the series selected.

Making its debut in the Chevy Express 2500 passenger van trim levels for 2011 is the standard variable-valve-timed (VVT) 4.8-liter V8 engine. Managed by a standard 6-speed automatic transmission with overdrive, the 4.8 puts out 280 hp at 5,200 rpm and 295 lb-ft of torque at 4,600 rpm and can tow up to 7,400 pounds when properly equipped. Fuel efficiency, never a strong point in this type of vehicle, is estimated at 11/17 mpg with regular unleaded and 8/12 when burning ethanol fuel.

Standard power in the 1500 Series is a VVT 5.3-liter V8 engine, also with variable valve timing and Flex Fuel capability. This reliable V8 is managed by a standard four-speed automatic transmission for 310 hp at 5,200 rpm and 334 lb-ft of torque at 4,500 rpm. Towing capacity with the 1500 Series drops to 6,200 pounds in the RWD version, and 6,000 pounds with the AWD configuration. Mileage, however, gets boosted to 13/17 with either the RWD or AWD configurations. A viscous, center-mounted limited-slip differential helps manage traction in AWD-equipped 1500 trims.

All the V8s are strong performers, according to reviewers, with both transmissions described as smooth and accurate. Gas mileage is, of course, one drawback to V8 power, with the 5.3-liter V8 in the Express 1500 series somehow gaining better fuel efficiency than the 4.8-liter V8 powerplant that’s standard on the 2500 series. Additionally, all engines are noted by reviewers as a tad noisy due to the intrusion of the engine compartment into the cabin area.

All of Chevy’s 2011 Express vans are equipped with a long and short arm front independent suspension, front and rear stabilizer bars, and a solid live axle rear suspension. The 1500 trims roll on 17-inch steel wheels, with the 2500 and 3500 trims riding on 16-inch steel wheels. All-season radials are standard across the lineup.

While reviewers agree that handling in this hefty people-hauler will never be confused with that of a minivan, the consensus is that the full-size Express handles surprisingly well for its size and weight, though maneuvering in tight spaces and city traffic is obviously not a strong point. Rack-and-pinion power steering complements front coil springs to provide better-than-average handling and a firm yet pliant ride, with steering noted as still a bit detached, but not as much as last year’s trims. Larger imperfections are noticeable but well-modulated, according to reviewers, with little wallow or float over dips and swells. Most reviews note some extra body lean is to be expected in fast cornering, but no more than in most vehicles in this class. Response to most normal driving situations is predictable and alert, according to nearly all reviews, while braking is noted as strong and straight, with no mushiness or hesitation in pedal feel.

Full-size vans are, as a rule, a bit short on creature comforts and techno wizardry, and the 2011 Express is no different. However, this capacious Chevy, even in its base LS form, manages to include such standard amenities as privacy glass and swing-out rear quarter windows complementing vinyl upholstery, air conditioning, OnStar Directions and Connections navigation/communications system, and an AM/FM radio with two speakers. The high-end LT trim, meanwhile, throws in standard cloth upholstery, rear climate controls, power windows, power door locks with remote keyless entry, cruise control, and tilt-wheel steering.

Virtually all reviews confirm a basic and business-like cabin that abounds with unadorned plastic. Gauges are noted as straightforward and easy to read, while controls are, for the most part, logically placed and well marked. Unfortunately, complaints from both reviewers and owners about the foot-room-cramping front wheel wells have fallen on deaf ears at GM, but the addition of the standard OnStar and available Bluetooth technology have at least hauled this venerable van into the latest century. Numerous reviews additionally laud the easy unlatching of the rear seats, but caution that they’re a bit too bulky to be removed by one person, thus putting the cavernous cargo capacity at risk of seldom being used. Said rear seats, however, are described by most reviewers as generous, supportive, and comfortable for both jaunts around town and long-distance cruising.

The National Highway Traffic Safety Administration (NHTSA) gives the 2010 Express vans its best five-star rating for front and side impact protection, with a less-than-stellar three-star rating in rollover protection for both the RWD and AWD configurations. The Insurance Institute for Highway Safety has no test data on the Express, doubtless due to its super-size bulk.

Fuel economy leads the short list of owner gripes about the 2011 Express trims. A number of owners, however, find that with a bit of foresight and some conservative driving habits, gas mileage can be improved to at least manageable standards. An additional owner complaint concerns the vulnerability of the rear swing-open passenger-side doors to damage. Several owners recommend choosing the available sliding doors as an antidote to constant touch-up and dent-pulling.

Nevertheless, people-hauling is what this full-size van is all about, and virtually all owners laud the Express for its undeniable abilities in getting a bunch of passengers from here to there. Comfy seats, V8 power, standard OnStar navigation and communications, and at least a modicum of ride and handling capability all come in for owner plaudits as well.

What's your take on the 2011 Chevrolet Express?

Have you driven a 2011 Chevrolet Express?
Rank This Car

My left rear brake and directional lights not working. Fast blinking and bulb has been inspected and replaced. It was not blown but I replaced anyway. They did work intermittently for a couple days a...

561 views with 3 answers (last answer about a year ago)

There are no prongs in the fuse box for receiver wires. How do I fix this?

74 views with 3 answers (last answer about a year ago)