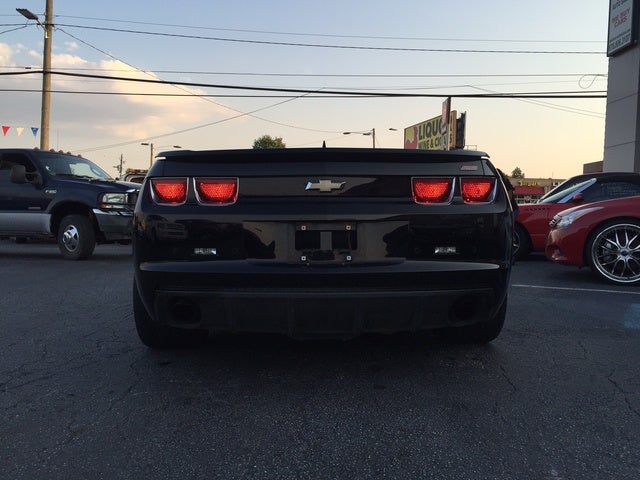 The 2011 Chevrolet Camaro offers two great engines, a stable platform and retro styling that harkens to the Camaro of old.

Chevrolet has had its work cut out for it keeping the Camaro competitive, and for the most part it's kept up with the crowd. With two stellar engines, a winning platform and suspension and a new convertible, the Camaro is a solid contender for your ponycar preference. But that still doesn’t make up for all the lying.

The guys at Chevrolet are nothing more than a bunch of dirty, dirty liars. Upset that Ford had introduced a new V6 for the Mustang that just happened to best the Camaro’s V6 by 1 hp, Chevy took a unique approach to winning the power war. Its tactic revolved around claiming the original estimates for the V6 were too conservative, and the now-SAE certified figure of 312 horses is accurate. So the Camaro’s V6 gets an extra 8 hp and 5 lb-ft of torque… on paper. Synergy Green, a color previously available on only the 2010 Synergy special edition, is now available across the lineup, and the heads-up display introduced in the Corvette will now be made available. They’re also releasing the perpetually delayed convertible for 2011, but otherwise the Camaro will remain unchanged.

That means we’ll be looking at the same LS, LT1, LT2, 1SS, and 2SS trims, powered by either a 3.6-liter V6 or a 6.2-liter V8. LS and LT trim levels get the fallaciously uprated V6, an impressive engine regardless of deception. Its 312 hp come in at 6,500 rpm - 100 rpm later than in 2010 – while its 278 lb-ft of torque arrive 100 rpm quicker than in 2010, here at 5,100 rpm. You get a choice of six-speed transmissions offering 17/29 mpg with the manual and 18/29 with the automatic, although testers have been less than impressed with both. The manual has been criticized for being less than precise, and the automatic for being slow to downshift. An optional short-throw shifter seems to take care of the issues with the manual, but it’s a shame we need to turn to the options list just to get a suitable gearshift.

It’s even more necessary with the V8, which pushes 426 hp and 420 lb-ft of torque when paired with the six-speed manual transmission. The automatic, which performs with increased competence here, also offers six cogs and pairs with the V8 for 400 hp and 410 lb-ft of torque. V8s with the automatic transmission also benefit from GM's Active Fuel Management cylinder deactivation, which pushes highway mileage up to 16/25 mpg, as opposed to 16/24 for a V8 with the manual. While the V6 is a potent powerhouse, the V8 provides scary power, able to slide you rearward in your seat in five of its six gears.

And all that power is needed, as the Camaro has grown over the years. This extra girth has made the Camaro less nimble than it once was, especially in comparison to rivals like the 370Z. Still, as it’s gotten larger, the structure has become more sound, providing a solid platform that maintains composure throughout hard cornering. Body lean is controlled well, but better is bump absorption, which is handled extremely well in the non-SS trims.

The SS, with its 20-inch alloys and sport suspension, is unable to damp bumps as well as the lower trims, but still manages to avoid shaking the glasses from your face over rough roads. Unless you need the ultimate in performance, the standard suspension is a better alternative for daily driving.

Brakes start good and only get better, with the SS trim getting 4-piston Brembos chomping down on vented discs for a 107-ft braking distance from 60 mph.

The 2011 Camaro interior mimics the first-generation Camaro with its retro-styled gauges and controls, and unfortunately seems to have carried over the finish of that era as well. Cheap materials dominate the cabin, with hard plastics and cheap cloth as the base layout. Again, turn to the options list to fix this, with leather and trim packages available that do make a difference, like the Interior Accent Trim Package for unique interior trim and stitching. The biggest change comes in the leather bucket seats in the LT2 and 2SS trims. They’re of better quality and are much more supportive than the base cloth units.

Unfortunately there’s nothing available to combat the poor ergonomics, and several owners and testers have commented on dials and knobs being out of reach, gauges out of view, and specifically about an auxiliary input located far back in the center console that's almost impossible to reach while actually sitting in the car. Genius.

The Camaro provides plenty of help with staying out of accidents. Standard traction and stability control meet with four-wheel antilock discs and six airbags across the trim lineup. Daytime running lights are included as well. Convertibles in the LT1 trim, as well as all LT2 trims and the 2SS trim get a rear-obstacle detection system, and the SS trims get the aforementioned 4-piston Brembos and vented discs. SS trims also enjoy a limited-slip differential, although that may be considered a safety liability rather than a feature.

Unfortunately, crash-test results for the 2011 Chevrolet Camaro have yet to be released by either the National Highway Traffic Safety Administration (NHTSA) or the Insurance Institute for Highway Safety (IIHS). However, results from NHTSA 2010 testing can be used for comparison, despite the adoption of new standards for 2011.

In 2010, the Camaro received a 4-star rating from the NHTSA in frontal collisions, and 5 stars in all other tests, including rollover.

You’ll hear no complaints about the Camaro engines and only some mild muttering about the transmissions. That said, the manual with the short-throw fix seems to please. The Camaro isn’t the best-handling ponycar out there, but it does have a stable and composed ride in a straight line and throughout the corners, with the non-sport suspension offering the best combination. There is some grumbling about things like storage/cargo and rear seat comfort and space, but if you’ve bought a ponycar hoping for either of those, you were embarrassingly misinformed from the start. However, shoddy interior materials and finish are simply unacceptable.

What's your take on the 2011 Chevrolet Camaro?

GuruVHJL7 The 2013 Camaro I bought is fast and beautiful. It is the 6 speed.

MaryKLuquette ❤ my 2011 Camaro 2SS LS3 6.2Ltr. It has upgraded exhaust and sounds mean

Users ranked 2011 Chevrolet Camaro against other cars which they drove/owned. Each ranking was based on 9 categories. Here is the summary of top rankings.

Have you driven a 2011 Chevrolet Camaro?
Rank This Car

Hi guys. I purchased a 2011 Camaro 2SS for my fiancé for his Birthday. I would like to replace these rims before surprising him with the car. Being there are no stores open during this madness, I ha...

24 views with 6 answers (last answer about a year ago)

Can You Help Transport Cars