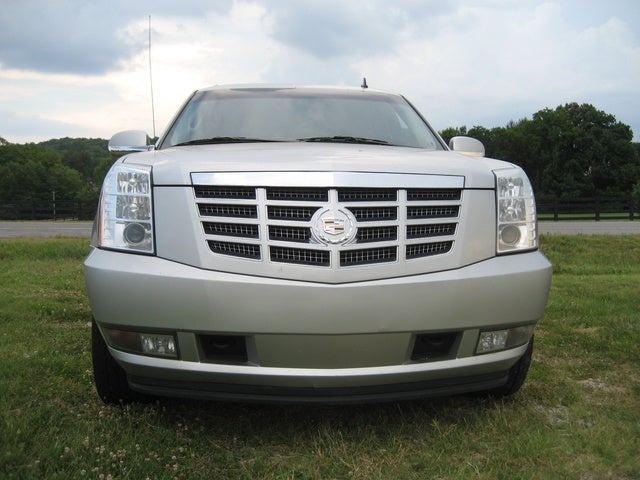 Looking for a Used Escalade EXT in your area?

The 2011 Cadillac Escalade EXT enjoys a position with almost no competition. Unfortunately for Cadillac, that’s mostly because it’s so heavy, so ugly, and so useless that no other manufacturer feels the need to weigh in. Based on the same chassis as the Chevrolet Suburban and the EXT’s kissing cousin, the Chevrolet Avalanche, the Escalade EXT is an attempt at a luxury pickup, whatever the heck that means. These crew-cab, four-door pickups seat five and sport what GM calls a “midgate,” allowing owners to expand the truck’s bed into the cabin via a bottom-hinged rear door.

With standard AWD and a single V8 powertrain, the EXT comes in Base, Luxury, and Premium trims. Choosing the Luxury trim will get you unique options and features such as a heated steering wheel, self-dimming headlights, magnetic ride control suspension, and blind-spot alert. Its 18-inch wheels are chrome alloy, as the EXT aims at a certain bling-friendly demographic. The Premium offers very little in the way of upgrades, adding only a DVD entertainment system and power-retractable running boards to this already gaudy package.

Regardless of trim chosen, the EXT is powered by an aluminum, 403-hp, 6.2-liter V8 that almost manages to adequately haul around the EXT’s 3-ton girth, despite 417 lb-ft of torque. Cylinder deactivation will kill half the engine while cruising, and variable valve timing does its best to improve efficiency, but the EXT still manages only 11/15 mpg according to the EPA. In reality, it’s quicker than it feels, coming close to a 6-second 60-mph trip, and capable of towing 7,600 pounds, but there are many vehicles for sale that improve on all these figures and don’t look ridiculous doing so.

This year 22-inch wheels have also been made available, and surprisingly they don’t hurt the ride much. Despite sharing a chassis, the EXT has a distinct AWD system from the Avalanche, and this system has been praised as being more road-friendly than its close relation's. In fact, the plush ride of the EXT is one of the best aspects of the vehicle, although steering that has been described as numb, vague, and over-assisted ruins the experience somewhat.

In all, the EXT offers a wealth of ridiculousness for the ridiculously wealthy, for only someone with money to waste would waste it on something like this. There are better luxury SUVs out there, and much better pickups, but if you find yourself in need of a “Convert-a-Cab” luxury SUV, there’s none better than the EXT.

What's your take on the 2011 Cadillac Escalade EXT?

Have you driven a 2011 Cadillac Escalade EXT?
Rank This Car

Looking for a Used Escalade EXT in your area?

What Was The Last Year The Cadillacs Ext Was Manufactured

The last year it was manufactured

Do you have to be a dealer or can I privately sell my vehicle through you?