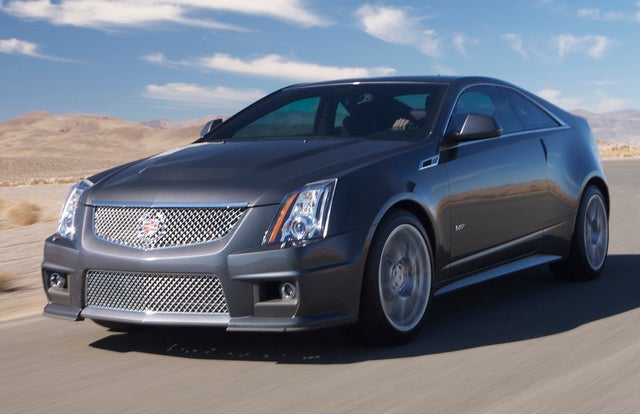 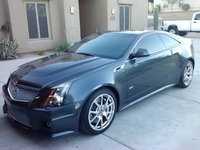 Looking for a Used CTS-V Coupe in your area?

Cadillac boldly strides into the sports-car arena with an all-new gladiator, the 2011 CTS-V Coupe. This highly anticipated hot rod debuts this summer with a base price of $62,990, though some dealers may charge a premium for the first units. With its intoxicating mix of high style and tire-scorching performance, the 2011 CTS-V Coupe shows that Cadillac can indeed compete with the best of the world. Though it’s not as established as many European nameplates, the CTS-V Coupe will easily show its taillights to the likes of the BMW M3, Audi S5, and even the mighty Mercedes-Benz CL63 AMG, a car that costs nearly twice as much.

The 2011 CTS-V Coupe improves upon the standard coupe’s already drop-dead gorgeous styling. With a lower stance, wider track, meaty 19-inch wheels and a front air dam with mesh grille, the two-door CTS-V clearly conveys its sporting intentions. The rear valance is complemented by an exotic center-exit exhaust and a boomerang-shaped third brake light that appears large enough to double as a spoiler. Special "V" badges (complete with racing-flag motif) and jewel-like xenon headlamps put the finishing touch on the CTS-V Coupe’s aggressive appearance.

Underneath the 2011 CTS-V Coupe’s sculpted hood rests Cadillac’s incredible 6.2-liter V8 engine. Shared with the CTS-V sedan, this powerhouse motor descends from the LS9 V8 installed in Chevrolet’s Corvette ZR1 supercar. Featuring a Roots-type supercharger, an aluminum block and a high-strength forged crank, the so-called LSA motor represents the pinnacle of overhead valve (OHV) development. Though it lacks the multi-valve technology of its imported competition, the LSA engine outshines them all in output, developing a stunning 556 hp and 551 lb-ft of torque. The monster motor can be combined with either a six-speed manual gearbox (featuring a much smoother shift action than most American cars) or a high-strength six-speed automatic that offers manual control via paddles mounted on the steering wheel.

With either gearbox the 2011 CTS-V Coupe is lightning fast. 0-60 times of less than 4 seconds have been measured, and quarter-mile times in the mid-12s will embarrass many established sports cars. While the rear-drive CTS-V leaves the line with the ferocity of a dragster, its real forte is mid-range acceleration. Its large-displacement supercharged motor provides instantaneous throttle response. Passing on the highway is a joy - just punch the throttle and watch your quarry disappear in the rear-view mirror. Top speed hasn’t yet been measured, but it should easily approach the CTS-V sedan’s amazing 191 mph.

Lest you think the 2011 CTS-V Coupe is a one-trick pony, consider that its formidable acceleration has been augmented by hours of chassis tuning on Germany’s famous Nurburgring circuit. The CTS-V Coupe’s four-wheel independent suspension features a control arm setup in front and a multi-link arrangement in back, a configuration that allows considerable adjustment by the engineers. With many laps of racetrack experience under their belts, the folks at Cadillac have labored to produce a predictable, capable chassis that is well up to the challenge of handling the car's massive horsepower.

The shocks feature GM’s novel MagnaRide technology, which uses a charged magnetic fluid to vary the shock’s damping rate, providing tight control of body motions without a punishing ride. As a result the CTS-V Coupe offers incredible grip in the corners while delivering a (relatively) compliant highway ride. Though the handling gives up nothing to its more expensive competition in terms of cornering ability (the CTS-V delivers a face-stretching 0.92g on the skidpad), the overall feel falls just short of BMW’s world-class M3. Cadillac’s engineers have done a commendable job, but they are a bit hamstrung by the heavy engine (which contributes to a nose-heavy 54/46 weight distribution) and the slightly numb speed-sensitive power steering. The brakes, supplied by Italian specialist Brembo, are excellent and feature six-piston calipers that stop the CTS-V Coupe with confidence from any speed.

It’s hard to imagine the old Cadillac producing a car as exciting as the 2011 CTS-V Coupe. The combination of style and performance offered by the two-door CTS-V is the clearest evidence yet that Cadillac has managed to completely reinvent itself. While its $62,990 base price isn’t within everyone's reach, it handily undercuts similar performance offerings from Europe and Asia. Though the Cadillac wreath might not carry the same cachet as Mercedes’ three-pointed star, the incredible performance and sharp styling of the CTS-V Coupe should make enthusiast drivers sit up and take notice.

What's your take on the 2011 Cadillac CTS-V Coupe?

Raul For the money... bar none the best coupe there is in its level of competition. Driven C63s, M4s and RS4s and panamera and none make touch feel like the caddy does

Have you driven a 2011 Cadillac CTS-V Coupe?
Rank This Car

Looking for a Used CTS-V Coupe in your area?

Please find me a Cadillac CTS Coupe with a 6.2l engine

water droplets have shown up inside one of the headlights and I'm wondering if I can take the headlight cover off the clean and seal it?

I Would Like To List My Car For Sale On Car Gurus. How Do I Do That?

Can I Sell My Car Without Being A Dealer