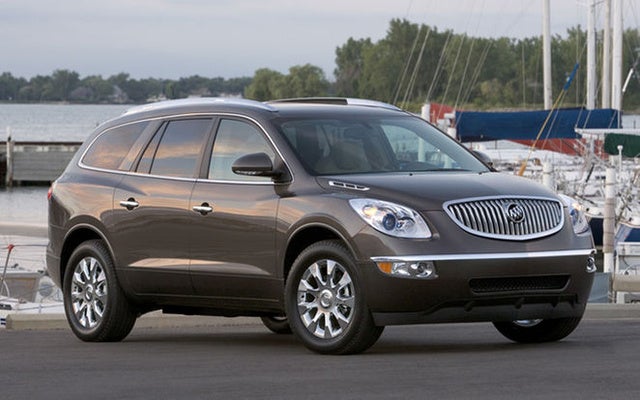 Snazzy styling, plenty of cabin room for seven or eight passengers, massive cargo space, loads of standard features, all-wheel-drive availability, and a plush ride are trademarks of the 2011 Buick Enclave.

Poor rearward visibility, tepid fuel economy, lack of a V8 engine, and its daunting size in tight places, not to mention a hefty pricetag, keep the 2011 Enclave from true greatness. 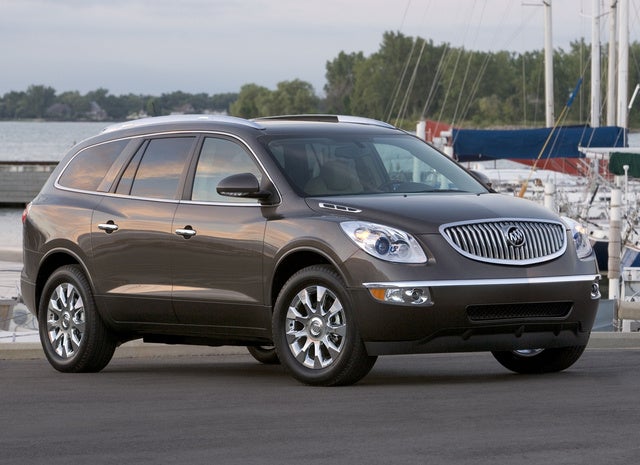 Good looking, versatile, comfortable, and performance-oriented, the 2011 Buick Enclave offers entry-level luxury and genuine practicality. Yes, it has a few faults, but those ought to be overlooked when considering what’s given in return. This classy crossover SUV has “family-friendly” written all over it.

Is it a midsize SUV or a large crossover? The 2011 Buick Enclave, with its daunting size and heft, yet without an available V8 powerplant, is described as one or the other throughout the automotive media. The seven- or eight-passenger Enclave is a high-end ‘Ute of a different sort, with posh and roomy accommodations, loads of standard features, and a plush, some would say luxurious, ride, as well as unibody (Lambda) construction, for almost sedan-like handling. All this screams “crossover” until it’s discovered that this well-wrought hunk also offers the cargo room of a midsize SUV, at 115 cubic feet with the rear seats folded, and available all-wheel drive (AWD) that’ll give it the bring-it-on traction of an SUV in snow and mud. All in all, this classy brute offers versatility, comfort, and style in a package that’s a bit large for the common crossover and just a tad more compact than the traditional hulking SUV.

Again for 2011, the Enclave comes in three trim levels, the base CX, midlevel CLX1, and top-shelf CLX2. All three trims are delivered with standard front-wheel drive (FWD), a power rear liftgate, OnStar Directions and Connections, and a roof rack, as well as 19-inch alloy wheels, cruise control, and power accessories. Additionally, all three trims are available with AWD safety. Be advised, however, that all this doesn’t come cheaply, with the Enclave representing one of the pricier ‘Utes on the market.

Speaking of pricy, however, the 2011 Enclave is favorably compared with Acura’s MDX and Lexus’s RX by a number of reviewers, performance-wise, and it’s safe to say that neither of the latter can be classified as especially wallet-friendly. Other competitively priced rivals include the Ford Flex, Hyundai Veracruz, and Mazda CX-9. The Enclave is also described by various reviews as among the more stylish crossovers on the market, yet with a unique practicality and toughness that growing families ought to appreciate. A slick ride, with enough agility to inject a little pizzazz into the trip to the mall, ought to be enough for this spiffy crossover SUV to overcome the stereotype of “grampy’s car.” 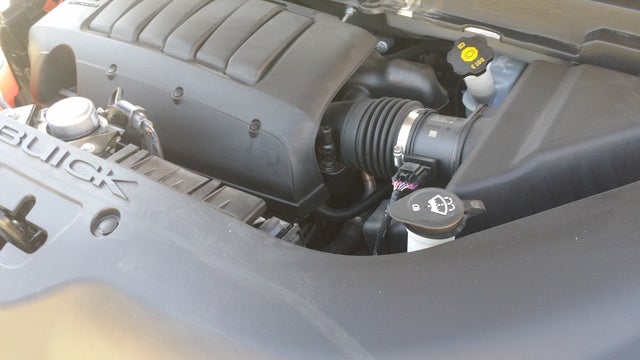 A single drivetrain equips the 2011 Enclave lineup, this being a 3.6-liter variable-valve-timed V6 engine and six-speed auto-manual transmission. The combo nets some 288 hp at 6,300 rpm and 270 lb-ft of torque 3,400 rpm. These ponies are healthy enough to tow a maximum of 4,500 pounds of trailer when properly equipped, but fuel economy is estimated at a lackluster 17/24 mpg in FWD trims and 16/22 in AWD versions. Those AWD trims, meanwhile, are managed by a traditional mechanical center-mounted limited-slip differential.

Reviewers find acceleration in the 2011 Enclave to be up to the challenges of ordinary driving, with FWD versions a tad quicker off the line than their AWD mates. Though no figures are readily available, it can be assumed that few necks will be damaged in 0-60 acceleration. A number of reviews also mention a distinct improvement in the six-speed auto-manual transmission for 2011. This smooth six-speed auto-manual, in its latest incarnation, seems to have been tweaked for a more alert reaction to input, with none of the tardiness in downshifting noted with previous versions. Furthermore, the V6 is described by nearly all reviewers as having a laudable growl on acceleration and then calming to virtual silence at highway speeds. The lack of an available V8 powerplant is, however, a detriment in the minds of at least a few professional reviewers, not to mention an owner or two.

Most reviewers agree that the 2011 Enclave offers one of the more comfortable cruises in the segment. This admirable ride is due, at least in part, to the 19-inch tires standard with all three trim levels. As well, a four-wheel independent suspension with MacPherson front struts and front and rear stabilizer bars does its part to keep the ride relatively bump-free. All this is further complemented by a multi-link rear suspension system.

Most reviewers compliment this classy crossover on its confident ride qualities, noting little wallow or float. Though a fairly heavy vehicle, the Enclave nevertheless demonstrates little of the ponderousness to which most vehicles in this class are prone. Of course, reviewers admit to noticeable body lean in sharp turns, but never to the extent that it feels unmanageable. Steering is described by numerous reviewers as accurate and well-wrought, while braking is also noted as powerful, with no perceptible pedal abnormalities. Because of its challenging body length, however, most reviews make a point of mentioning the Enclave’s lack of maneuverability in heavy traffic and crowded parking lots.

Options for the Enclave lineup include, for the CX trim, many of the standard features found on its upper-tier brethren, with rear-seat DVD entertainment, touch-screen DVD navigation, a SkyScape power sunroof, and a second-row storage console with additional 12-volt outlet optional for the CXL1 and CXL2 trim levels. Additionally, all three trims are available with second-row bench seating for eight-passenger capacity and a trailer towing package, while the CXL2 can be delivered with available 20-inch chrome-clad wheels.

Subdued and comfortable is how most reviews describe the cabin in the 2011 Enclave. Gauges are admirably readable day and night, and controls are logically placed and, even with the DVD navigation system, easy to operate. Only the use of pushbuttons rather than the infinitely simpler rotary knobs on the climate control system seems to bother reviewers. For the most part, reviewers find cabin materials to be well-chosen, though a few plastic surfaces jar the senses of several reviewers with their inappropriate intrusion into an otherwise pleasing ambiance. Cabin storage is a plus in the Enclave, according to most reviews, and the tradition of plush, supportive seating is, with the exception of a somewhat legroom-challenged third row, maintained admirably.

In government crash tests, the 2010 Enclave received five stars from the National Highway Traffic Safety Administration (NHTSA) for front and side impact testing, and four stars in both FWD and AWD versions in rollover tests. The Insurance Institute for Highway Safety (IIHS) gives the 2011 Enclave its best score of Good across the board, though rollover testing was not conducted.

Among owner complaints with the 2011 Enclave, poor rearward visibility and the lack of rain-sensing wipers are the most often mentioned. Its hefty base price also concerns a few owners, as does less-than-stellar fuel economy. Several complaints that front-seat passengers ought to have standard eight-way power-adjustable seats are also heard. The jarring use of a few chintzy cabin materials as well as some difficulty in folding the third-row seats are noted by several owners as well. A final owner gripe is the lack of an available V8 engine.

Positives for the 2011 Enclave, according to the vast majority of owners, start with its styling, quietness, posh ride, and massive passenger and cargo room. Owners also laud its loads of standard features, luxury touches, and the adequately potent V6 that characterize the Enclave experience. Finally, most every owner mentions this hefty 'Ute's safety record when singing its many praises.

Papy2 I like that car since I bought it I never had any problems with it.

Have you driven a 2011 Buick Enclave?
Rank This Car

already replaced all three section of catalytic converter and starter; getting to have the 02 sensor replaced and spark plugs, don't know if that would solve the problem

How Do I R&R A Headlight Lens?

How to get headlight lense off? From the wheel well or from engine compartment? How much stuff do I have to remove to get there?

2011 Buick Enclave Where Is My Ballery

my xar is dead, my key is in the ignition won't release it and my car is dead