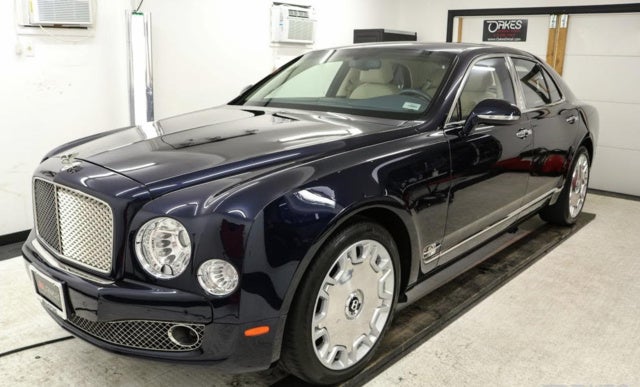 Bentley has poured a lot of money into its new Mulsanne, in an effort to seemingly embarrass its former owners, Rolls-Royce. In what they’re calling the first all-Bentley Bentley since 1931, the Mulsanne is taking a pretty obvious swipe at Rolls’ Ghost, producing what they’re calling the “pinnacle” of driver-focused luxury automobiles. Named after the famous straight, the Mulsanne is capable of a 184-mph top speed if let loose on the 3.7-mile straightaway at Le Mans, where Bentley has won the legendary 24-hour endurance race five times.

In fact, Bentley assures us that heritage was the inspiration behind the Mulsanne’s entire design, from its pushrod V8 engine to its traditionally tanned leather interior. That’s right, due to overwhelming customer feedback, Bentley has chosen a tanning process only a handful of leather manufacturers in the world can replicate, in order to achieve that vintage Bentley leather smell so loved by owners. So much attention is paid to the Mulsanne’s assembly that the interior alone is said to take over 170 hours to put together, as Bentley is more than happy to remind. Overall, 400 hours are said to be needed for the Mulsanne’s mostly hand-built process.

They’re claiming that this attention to heritage and history is the impetus behind the use of the archaic pushrod V8 you’ll find under the interior, at its heart the same 6.75-liter twin-turbo beast that motivated the outgoing Arnage. Bentley felt that a pushrod engine would also deliver the kind of torque that buyers expect from a Bentley, and with 752 lb-ft showing up at just 1,750 rpm, it’s hard to argue the logic.

To say it’s the same engine is a bit disingenuous, as here it’s been upgraded with lightweight materials like pistons, connecting rods, and a forged crankshaft, as well as some needed technology, such as variable valve timing and cylinder deactivation (what Bentley is referring to as “cam phasing” and “variable displacement”). Don’t expect world-saving fuel economy, but at least they’re making an effort. It’s a gorgeous engine strapped to an even better eight-speed automatic with paddle shifters, and both seem to make an effort to make sure they do their jobs without being noticed, like a good butler.

But we all know mechanics aren’t the focal point of any Bentley, overshadowed as they are by the interior, with heavy importance laid on the back seat. Bentley offers hundreds of color, leather, and wood options to choose from, and will even customize any of the above to your exact specifications. Name it, pay for it, and it’s yours.

For the audio systems and other interior tech, Bentley decided to head in the opposite direction of heritage, making a 2,200-watt surround-sound Naim Audio system an option for the Mulsanne. They claim it’s the most powerful production audio system ever made available, and it certainly sounds like it. You’ll also get a 40GB media and nav system with an 8-inch screen hidden behind a powered leather veneer as well as a leather-lined drawer for your iPod. The tech systems are said to be a monumental improvement over the outgoing examples as well, a welcome change. The personalized keyless entry and memory system offers unique settings to be recalled for the seats and their power features, the steering column and seatbelts, as well as the rear-seat blinds and even the phone book and radio stations.

But we can’t ignore the fact that the car has been named after a straightaway that routinely sees 200-plus mph. Despite that, the Mulsanne corners with an agility that almost makes you forget this tank’s 5,700-pound girth. It rides on a new air suspension system that utilizes continuously variable dampers that adjust the Mulsanne’s ride height for reduced lift and maximum aerodynamics. It also features Drive Dynamics Control with four driving modes of Bentley, Sport, Comfort, and Custom, with Bentley being the engineers’ pre-sets, a blend of Sport and Comfort. Custom allows the driver to choose personal settings via the multimedia system.

As Bentley’s sales have been dipping continuously for a few years now, there’s a lot of pressure on the Mulsanne to revitalize the now Volkswagen-owned manufacturer. If nothing else, the Mulsanne is a huge improvement over the Arnage - we'll just need to wait and see if it’s good enough to prove that a non-Rolls Bentley can inspire the ultra-luxury segment to start writing quarter-million-dollar checks.

What's your take on the 2011 Bentley Mulsanne?

Have you driven a 2011 Bentley Mulsanne?
Rank This Car