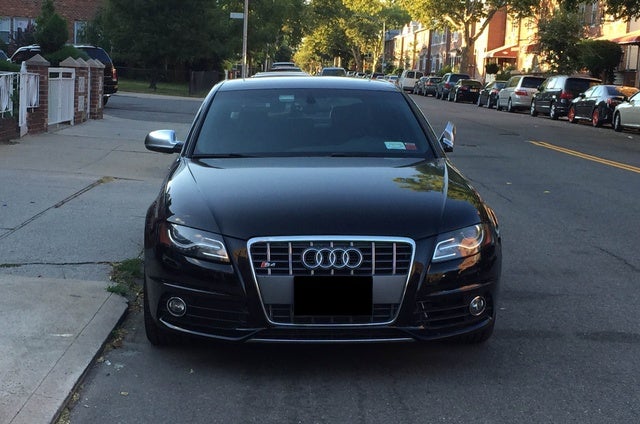 The 2011 Audi S4 offers crisp handling and stout power in a refined package that’s still driveable all day, every day.

A disappointing manual transmission and some interior quirks are the small shortcomings in the 2011 Audi S4.

Some would place the S4 in an automotive no-man’s land, positioned between the already sporty A4 and the insanely sporty RS4. Those people are fools, for the S4 offers top-shelf handling and power in a classy and comfortable package that can as easily take the kids to school down a snowy road as it can pour itself down a corner-crammed canyon. Avoid the 6-speed for now, and try not to be annoyed by the clumsy center console ergonomics and you won’t be disappointed by this super saloon.

Of all the never-ending competitions in the automotive industry, my favorite may be the quest to build the ultimate super saloon. Unfortunately, this isn’t it. While the S4 once aimed to challenge entrants like the BMW M3, that duty is now being left to the S4’s more aggressive sibling, the RS4. Still, the all-wheel-drive, 4-door, supercharged sedan is nothing to scoff at, despite its aiming for smaller game these days.

Until recently, the S4 was a V8-powered beast, with all the respect that venerable designation demands. Then Audi decided a new direction would be prudent and instead designed an all-new aluminum V6 engine with direct injection and a new Eaton Twin-Vortices Roots-type supercharger. It uses twin, axially-twisted four-lobe rotors as well as twin intercoolers – but more importantly it bumps output on the aluminum V6 to 333 hp and 325 lb-ft of torque. Peak torque shows up at 2,900 rpm and stays solid until 5,300. Just 200 rpm later, peak horsepower makes its appearance, and sticks around until 7,000.

This means the S4 isn’t going to tear the asphalt out from under you at the line, but a short moment later you’ll be rewarded with a strong and solid pull throughout the rev range. Audi claims the new supercharger design combats the whine and coarse nature of other setups, leaving nothing but pleasant tones to seduce the ear. Seems to work, too. The V6 offers an aggressive snarl that still hints at refinement without any of the annoying supercharger noises to disrupt the harmonics.

More importantly, the V6 is faster than the V8. It’s more efficient too, and because of its lighter weight and installation further aft, the V6-powered S4 is a more balanced offering than its V8 predecessor. For anyone other than 8-cylinder addicts, this is an improvement. Audi claims 18/27 mpg with the 6-speed manual and 18/28 with the 7-speed dual-clutch S tronic. Yes it requires premium petrol, but these figures are only a few digits off the turbocharged 4’s mileage, and that’s impressive. Still good on paper and good in real-world application are two different things, as testers have proven. Actual combined fuel mileage falls closer to the lower end than the higher, usually due to right-foot preferences.

Testers have found the 6-speed to have long shifter throws and even longer clutch travel. Drive one first before you decide that the manual is your transmission of choice, as the 7-speed offers its own version of fun with standard paddle shifters as well as a slight efficiency improvement. Also, some testers have found the S4 to burn a bit of oil, up to a quart in under 2,000 miles.

Despite the RS4 holding the performance prince title, the S4 will still allow you to conquer corners just fine thanks to its fully independent multi-link suspension, rear-biased AWD system and front and rear limited-slip differentials. The S4 comes standard with a stiffer, sport-tuned suspension, but if you feel the need to push things a bit harder, there are options.

Just a few thousand dollars will get you an adaptive suspension or an active electro-mechanical limited-slip, just like big bro. The former also comes with variable controls for the steering ratio and assist called active steering. All of this, combined with the more balanced nature of the V6 setup and the 18- or optional 19-inch wheels make for easy turning at nearly any speed. The S4’s ride can get a bit harsh, but the adjustable suspension takes care of much of this. Driver aids combined with the rear-biased AWD mean the S4 goes where you point it, and with some winter tires it even performs in the snow. Careful though, as the above features will tack almost $4,000 extra onto the price of your S4.

Open the door and you’ll be greeted by soft leather surfaces emblazoned with the S4 logo, such as on the steering wheel and seats. There’s also a faux carbon-fiber trim that adds to both the sport ambiance and the overall quality of the interior, making those extra dollars a little less painful.

Seats offer enough support to keep you planted in corners as well as a level of comfort that won’t have you running to the chiropractor after every drive. Rear seats are similar, but understandably lack the head- and legroom offered up front. It’s not cramped, but larger adults aren’t going to want to set up camp, either. One major issue is the center console. The armrest prevents use of the handbrake or cupholders, and the entire assembly intrudes on right knee space annoyingly. This is something that has plagued the A/S4 for years and should have been taken care of years ago.

Features are plentiful here with tri-zone automatic climate controls, standard leather/Alcantara upholstery, iPod interface and bi-xenon headlights. A $6,000 Premium Package will add a nav system, rear-obstacle detection with rear-view camera, a memory system for the driver’s seat and mirrors, keyless access and start, 19-inch wheels and a Bang and Olufsen stereo with hi-def radio as well as Audi’s MMI operating system. All are welcome features, but some have had trouble with the nav system, which offers complicated controls and a frustrating interface.

Noise is muted all around, whether from wind, road or tires. This only makes listening to the smooth growl of the supercharged V6 even easier, and that’s a good thing.

The S4 offers plenty in the way of safety with standard traction and stability control, front and rear limited-slip differentials, four-wheel antilock discs with assist and six standard airbags.

With small complaints surrounding the center console and navigation system, the Audi S4 offers little to criticize. With a class-leading interior, a near-perfect engine and a solid 7-speed tranny it promises to bring the clichéd smiles for miles. That said, adjustments to correct these small complaints would be quite simple, increasing frustration. Moreover, the long throws and clutch travel of the 6-speed seriously detracts from the preferred transmission setup. Still, owners are increasingly pleased with the S4’s handling and power and always more than pleased with the overall interior.

I wasn't able to connect my Bank and said to call.

Has anyone tried using spacer to have the wheels flush better with the body? factory 19" wheels....