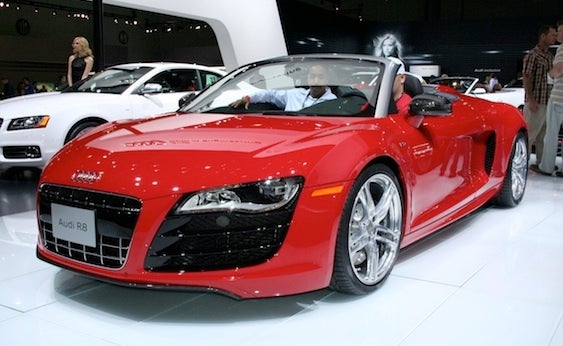 It’s been five years since Volkswa… I mean since Audi entered the midengine supercar world with the R8. Back then it was a beast of a luxury sports car, with Audi’s legendary quattro AWD system and a refined 4.2-liter V8. The quattro AWD has stuck around, but the R8 has gained weight in recent years. Thankfully, a good portion of it can be attributed to the addition of two extra cylinders in the form of a 5.2-liter, DOHC V10 engine. At 4 valves per cylinder, that’s 40 valves chattering behind your head, helping to deliver 518 hp at a stratospheric 8,000 rpm, not to mention 391 lb-ft of torque 1,500 rpm earlier.

That’s enough to allow the R8 to finally bust the 4-second 0-60 mph barrier, putting it that much closer to its cousin, the Lamborghini Gallardo. And while the R8’s chassis, six-speed manual transmission and floorpan are all based on the Gallardo, don’t believe people who tell you the V10 was stolen from the Italians as well. It’s easy to forget that while the Lambo does use a version of that engine, they themselves got it from Audi, specifically from the S6 and S8. All in the family.

The rest of the car is purely Teutonic, however, and the guys at Audi AG’s quattro GmbH high-performance subsidiary were the real minds behind this midengine mayhem. Audi itself is the reason we’re getting only the six-speed R tronic single-clutch semi-automatic transmission, as opposed to the S tronic dual-clutch setup. They feel the current iteration simply couldn’t handle the torque the big V10 produces, and considering the R8 ships only 2,500 units per year, they aren’t keen on spending the money to upgrade one. For shame.

Still, the R8 gets plenty of high tech, from the infrared-reflecting seat materials to the aluminum monocoque spaceframe. That V10 is aluminum as well, although the R8 still manages to tip the scales at more than 3,500 pounds.

That said, if you don’t mind the extra weight, Audi has another option for you – the R8 Spyder. Weighing 300 more pounds than the Coupe, the Spyder offers a power ragtop that will fold like an unlucky card player at speeds up to 30 mph. The Spyder loses the divisive – pun definitely intended – “sideblades” that angle up the flanks of the Coupe, and this only highlights the R8’s 174.6-inch length, giving it a definitive stretched look.

Regardless of the R8 you choose, you’ll be treated to leather upholstery on its heated 10-way power seats, a 465-watt Bang & Olufsen sound system, adjustable suspension with magnetic dampers and a long list of electronic safety features in the form of the Bosch ESP 8.0 Electronic Stability Programme. This offers ABS, electronic brakeforce distribution, Anti-Slip Regulation (ASR) and Electronic Differential Lock (EDL). You’ll also get the distinctive all-LED headlamps that made headlines as a first-ever not just for Audi, but the rest of the world as well.

So now you have yet another option for 200-mph motoring with the top down, and while the Spyder is big news for Audi, the real interest will be in how Lamborghini responds. When the R8 was V8 powered, the distinction between it and the Gallardo was obvious. Now, with both vehicles producing Spyder versions, both with V10 power and performance numbers with negligible differences, something will have to be done to draw that distinction again.

And that’s good news for everyone.

Guru3SKTR Very stylish and v10 is a must