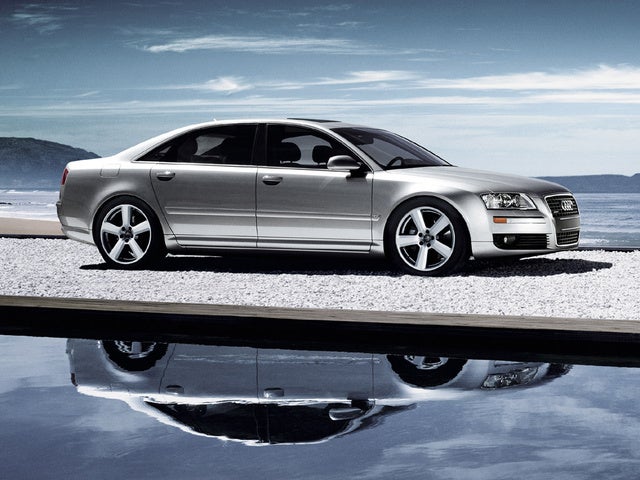 Audi seems to have positioned itself as the master of understatement – a funny thing for a luxury manufacturer. Still, when compared to BMW or Mercedes, most reviewers seem eager to point out how the Audi has less power, fewer sales, and a significant lack of electronic pomp and circumstance.

Taken in context, this isn’t always a bad thing. Fewer sales means you’re not going to constantly pass yourself on the road, there’s certainly something to be said for elegant simplicity, and when the power difference means 372 versus 400 hp, we’re really picking nits.

For 2011, Audi has redesigned the all-wheel-drive, four-door A8, but has managed to avoid blending with the crowd. Yup, it still has less power than its competitors, but it will do the jaunt to 60 in 5.7 seconds. Let’s be honest, you’re not racing, you’re driving to work, and the A8's direct-injected, all-aluminum 4.2-liter V8 is no sloth regardless. Audi throttled another 22 hp out of it for 2011, as well as 3 more lb-ft of torque. There’s also a new eight-speed Tiptronic manually capable automatic transmission that, coupled with engine modifications, result in a 15 percent increase in efficiency.

The redesigned A8 is larger than the outgoing design as well as its predecessors, and yet due to the use of the aluminum Audi Space Frame – which boasts a 25 percent increase in torsional rigidity – the A8 is the lightest in the class, besting a similarly equipped BMW 7 Series by several hundred pounds.

But that doesn’t mean more can’t be a very good thing. Audi’s lauded MMI Touch Interface system has been updated here to include a touchpad that will recognize letters traced in a number of languages, displayed on an 8-inch monitor. It integrates the navigation system, entertainment, and more, and is supposed to offer driver interface without the need for removing your eyes from the road. Innovative? Perhaps. But I fail to see how this is any safer than texting while driving. I guess spending six figures on your vehicle exempts you from certain police hassles, if not accidents.

Thankfully, the A8 comes with more safety systems and features than you can trace … ahem … shake your finger at. Some are welcome and comforting, like adaptive cruise control and the pre-safe system, which pre-loads the seatbelts and brakes as well as closes the windows and sunroof in the case of an imminent accident. Some, however, are a bit more esoteric, like the infrared night vision with pedestrian-detection highlighting. At a certain point, one has to wonder how much attention will be left for actually driving.

As expected, the interior of the A8 is in classic Audi style, with gorgeous materials such as leather and alcantara, wood and aluminum - all illuminated with enough LEDs to rival Times Square, although slightly less gaudy. The seats are incredibly comfortable and supportive, but if you’re the kind of princess who can detect a pea in a pile of mattresses, Audi offers upscale seating with 22-way adjustment, heating, cooling, and massage. Also, there’s something to be said for a 630-watt Bose sound system as the entry-level stereo. A Bang & Olufsen system is the alternative, with 19 speakers and 1,460 watts.

In all, the Audi A8 may be the best option most fail to consider.

Do You Do Trade Ins?

Five Rings On The Back Of My Audi???

I am selling a car for 2000 less then my lien. I can payoff difference in one day. How does this process work?

This car has had two owners locally. Both owners maintained the car meticulously, I have the complete service history on this car, it's been in no accidents, drive belt was changed at 76,690, plus al...