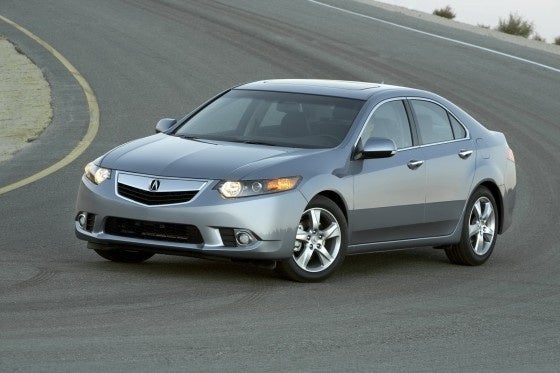 Unfortunately, the otherwise well-wrought entry-level luxury 2011 TSX is plagued by a distracting racket from the standard four-cylinder powerplant, lackluster brakes, a mind-numbing number of buttons on the center display screen and its less-than-perfect grille.

The venerable Acura TSX regains a bit of styling respectability as well as a load of utility with the addition of the Sport Wagon in 2011. Though the standard four-banger has an issue or two, it’s still got enough oomph for the average commuter, not to mention better-than-average fuel efficiency. And after contemplating the scads of standard features, the average family could do worse in an entry-level luxury sedan or wagon.

For 2011, Acura’s intro-level TSX compact luxury sedan is joined by a Sport Wagon edition that adds significant cargo capacity to a pretty nifty little vehicle. This five-passenger duo brings a somewhat new look, as well as marginally improved gas mileage, lower emissions, added sound-deadening insulation, and an available new hard-drive-based navigation system to the table for 2011. Exterior tweaks this year include a barely noticeable softening of the metallic overkill that has dogged the TSX’s under-slung bow since its inception. The Sport Wagon, meanwhile, injects some sorely needed styling relief to what had been an almost moribund look, while adding 60.5 cubic feet of cargo space with the rear seats folded. The venerable TSX sedan, on the other hand, stands pat with 14 cubic feet of trunk space, but can be equipped with an available V6.

With the addition of the Sport Wagon, the 2011 TSX now offers two trims, with the sedan again available with either a standard shiftable automatic transmission or an available smooth-shifting manual, while once again offering an available V6 powerplant. Both variations, meantime, come with a standard power sunroof, and each can be equipped with the optional Technology Package to complement a cabin already rich in leather, comfort and techno-wizardry. One minor drawback to the TSX is the fact that Acura recommends burning premium gasoline in both the inline 4-cylinder (I4) and V6 editions. However, this minor glitch, as well as a button-laden center stack and somewhat noisy I4, can be easily overlooked when whipping around twisty mountain roads or schlepping a load of home-improvement stuff home from the building center.

Rumblings are, however, already afoot from some in the automotive media that the Sport Wagon may be unable to match the likes of the Audi A4 Avant and BMW 328i wagon as far as sportiness and pure power are concerned. At the moment, Acura plans a test batch of some 4,000 Sport Wagons for the U.S. to find out if an Asian compact luxury wagon has a prayer against its potent Teutonic competitors. So far, the jury’s still out, and nobody can foresee how this capable compact wagon, assembled in a now somewhat bedraggled Japan, is going to fare. Word is that Acura is well aware that most Americans will likely choose a small crossover over a compact wagon, even one as well endowed as the TSX Sport Wagon. Though a bit outclassed by the 2011 TSX sedan lineup, the Ford Fusion, Nissan Altima, and Volkswagen CC are worth a tire kick or two. 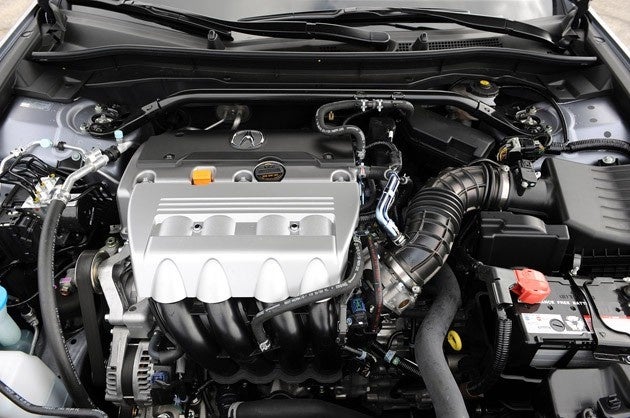 Standard power for the 2011 TSX Base sedan and the Sport Wagon comes from a 2.4-liter I4 engine that’s mated with a standard 5-speed shiftable automatic transmission. This combo is good for 201 hp at a lofty 7,000 rpm while throwing down 170 lb-ft of torque at 4,300 rpm. Variable valve timing, meanwhile, leads to an estimated 22/31 mpg using the recommended premium unleaded gasoline, and according to a couple of road tests, a 0-60 mph time of just over 8 seconds can be expected. Additionally, the Base sedan can be equipped with a 6-speed manual transmission, putting some extra kick into the commute and shaving about a second off the time it takes to get from 0 to 60.

The Base sedan is also available with a potent 3.5-liter V6 powerplant that mates with the standard 5-speed auto-manual for 280 hp at 6,200 rpm and 254 lb-ft of torque at 5,000 rpm. Again boasting variable valve timing, the V6 gets an estimated 19/28, but unfortunately isn’t offered with the 6-speed stick. In any case, one road test had the V6-equipped TSX scooting from 0-60 in a respectable 6.4 seconds.

Reviewers are nearly unanimous in their praise of the I4’s low and midrange acceleration, though some are not so appreciative of its somewhat unrefined engine note at higher speeds. The V6, on the other hand, has no problems passing and merging, and reviewers say it sings a much more powerful tune on acceleration, then subsides to near silence at cruising speeds. The shiftable 5-speed automatic is described by virtually all reviewers as silky and alert, while the 6-speed manual is noted as a joy to drive with its abbreviated clutch throw and feather-light shift action.

The TSX places handling and ride comfort in the capable arms of its four-wheel independent suspension with a double-wishbone front setup and multilink rear end. Additionally, front and rear stabilizer bars complement standard 17-inch alloy wheels on the I4-equipped sedans and wagons, while 18-inch alloy wheels grace those Base sedans sporting the available V6. Reviewers find the ride in the Base I4 sedan can be a tad stiff, though all are quick to point out that those pesky potholes and ridges are well-damped and mostly unnoticeable, though the sport-tuned suspension on the Sport Wagon and V6 sedan sacrifices a bit of absorption for a bit more driving élan.

Both the Sport Wagon and the V6 sedan are noted by nearly all reviewers for their tenacious grip in corners, while body lean is described by many as all but nonexistent. A number of reviewers are especially impressed with the electronic power steering system that’s admirably light for low-speed maneuvering, then bulks up quite well on the highway and those quirky back roads. A few, however, express some concern that steering often seems a bit overfriendly, with at least one unimpressed with overall steering feel in all but low-speed maneuvers.

Brakes in the TSX seem to be a matter of some divided opinion among reviewers. Many describe braking in this nifty luxury compact as powerful and true, while others find that some tweaking might be in order so the brakes can react a bit better to emergency stopping situations. Those latter assure one and all that, though imperfect, braking is more than up to normal driving conditions.

In addition to driving prowess, the 2011 TSX lineup boasts one heck of a well-appointed cabin. Both the I4 and V6 sedan and the Sport Wagon are delivered with standard leather upholstery, power-adjustable, multi-level-heated sport front bucket seats and split-folding rear seats with a center armrest. Comfort and convenience goodies include remote power door locks, power windows, and heated power-operated outside mirrors, telescoping tilt-wheel steering with mounted paddle-shifters, audio, and cruise controls, a universal remote garage door opener, memory settings for two drivers, and dual-zone climate control. A leather and alloy steering wheel and leather and alloy accents on the shift knob, dashboard and console, endow the cabin with some posh, while a 360-watt audio system, featuring an MP3-capable single-CD player and seven speakers, inject hours of listening pleasure. Standard XM satellite radio, with three months of complementary service, also serves to even out the ride. Further techno-features include Bluetooth hands-free communications and a USB connection with iPod interface.

All of the 2011 TSX trims can be delivered with the available Technology Package, thus elevating this nifty compact into a higher end sub-trim, the TSX w/Technology Package. This package comes with such goodies as a rear-view camera, 450-watt audio system with 6-CD changer, 10 speakers, and Acura/ESL 5.1 surround sound, hard-drive-based and voice-activated navigation, and AcuraLink telecommunications featuring real-time traffic and weather, as well as constant powertrain monitoring.

Interior workmanship and materials are described by most reviewers as top-notch for the most part, though at least one is of the opinion that the TSX cabin feels more sporty than luxurious. Even a few low-rent panels here and there are forgiven by reviewers as incidental to the overall ambiance of this classy sedan’s cabin. Most reviewers are impressed by the TSX's cabin layout, with many finding the center-mounted display for audio and climate controls as well as the available navigation system especially praiseworthy. There are a few reviews, however, that note a daunting overabundance of buttons around the screen, as well as a propensity for the display to wash out in bright sunlight. Voice commands with navigation functions also must be put slowly and distinctly for proper operation. On a more positive note, seats are described by a majority of reviewers as comfy and supportive, though the rear seats are said to be a tad cramped, even in the new TSX Sport Wagon.

The National Highway Traffic Safety Administration (NHTSA) gives the 2011 TSX sedan five stars across the board, while the only testing done in 2011 has the sedan earning a five-star rollover rating. Additionally, the Insurance Institute for Highway Safety (IIHS) gives the 2011 TSX trims its best rating of Good in front and side impact testing, but did not perform roof-strength tests.

Cramped rear seating and a lack of zoom in the four-banger top the list of owner gripes with the 2011 TSX lineup. As well, several owners complain that push-button start isn’t offered as either standard equipment or an option. A final downside to this otherwise well-received high-end sedan, at least in the minds of a few owners, concerns the brakes, which are claimed to be prone to needing early pad and rotor replacement.

Styling, especially with the new grille as well as mileage with the I4 engine, loads of standard features and surprising ride quality in the Base sedan draw kudos from nearly all owners. Cabin quietness, a reasonable base price, and over-the-top resale value also gain their share of owner praise. So far, positive owner reaction to the Sport Wagon focuses mainly on its 60 cubic feet of cargo area and refreshing exterior design.

Have you driven a 2011 Acura TSX?
Rank This Car

can i sell my car here?

Tried starting car up the other day and would not start after an hour of starting up with no problems. Got a boost and refilled battery. Next day halfway through the day car almost didn't start. ...

What Would Cause Me Having To Put In My Anti Theft Device Code?

I went to start my 2011 Acura TSX and I got no noise at all and it would not start. I then got out and locked and then unlocked with the key fab, it then started but I had to put in a code for my...