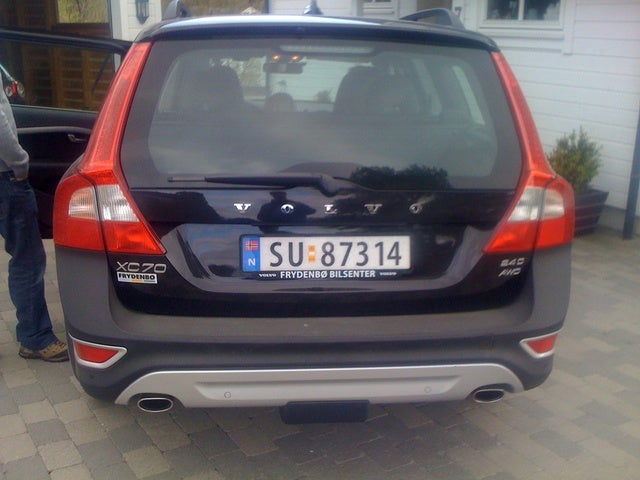 For 2010, Volvo once again presents the XC70, a comfortable five-passenger, four-door wagon with a pretension to grandeur that may manifest itself more in its price than in actual performance. This does not mean, however, that the XC70 is in over its head. Available in two trims, the base 3.2 and the high-end T6, both of which feature standard all-wheel-drive (AWD) traction, this Euro-styled wagon offers legendary Volvo safety, plenty of cargo room (71 cubic feet with the rear seats folded), and a plethora of standard appearance features and cabin amenities. Though Volvo touts the XC70 as a luxury alternative to the basic crossovers and small SUVs out there, potential buyers may want to look at Subaru’s Outback and the Volkswagen Passat Wagon before making a move.

A 3.2-liter inline six-cylinder (I6) variable-valve-timed (VVT) engine and standard six-speed auto-manual transmission powers the 2010 XC70's base 3.2 trim. This drivetrain orders up 235 hp and 236 lb-ft of torque while getting an EPA-estimated 18/27 mpg. The T6 trim comes with a standard turbocharged 3.0-liter VVT I6 that combines with its six-speed auto-manual to throw down 281 hp and 295 lb-ft of torque to the tune of 16/22. AWD traction is managed by a viscous, center-mounted limited-slip differential. Curiously, despite the difference in torque and horsepower between the two engines, towing capacity is the same - 3,300 pounds for both.

A number of options packages are offered with both XC70 trims, including the Climate Package with heated front seats, headlight washers, and rain-sensing wipers, and the Convenience Package, which features a remote garage door opener, power liftgate, and power-adjustable pedals. As well, there’s the Multi-media Package with 12-speaker Dynaudio sound, satellite radio, and the Volvo navigation system, and the Technology Package, with adaptive cruise control and a collision warning system. The base 3.2 trim meanwhile offers the unique Premium Package, featuring leather upholstery, a power sunroof, a power passenger seat, and wood dash trim, while the sunroof is a stand-alone option for the T6. Available rear-seat DVD entertainment is also offered as an option for each trim.

Owners of the 2009 Volvo XC70 will concede that the term “luxury” may be a bit of a stretch, but despite a somewhat hefty base price, notable lack of giddy-up from the base engine, tepid fuel efficiency, questionable standard tire quality, and questionable maintainability of the leather upholstery, most seem more than satisfied with their choice. Supremely comfortable seats, seemingly endless cargo space, quality workmanship, scads of safety features, Euro-styling, a comfortable ride, standard AWD, and integrated rear booster seats make the 2010 XC70 a solid family wagon.

Liliflower I think you properly need a Volvo Dice kit and subscription of VIDA software, much possibilities will be activated/ fixed with the dealer kit. http://www.obd2express.co.uk/wholesale/volvo-vida-dice-diagnostic-tool-obd2express.html

Tranny and engine conditions after a hundred and ten thousand miles

I have 3 volvos, so having a single device to diagnosis all my car is what I am looking for.So my question was related about cars supported by SP21-A device (volvo vida dice).Are following cars suppo...