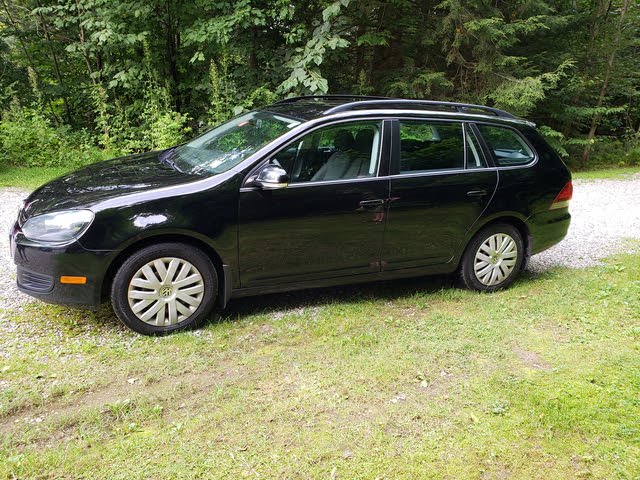 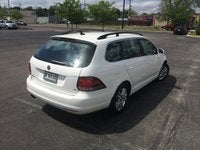 Reinstated in 2009, the cargo-friendly Volkswagen Jetta SportWagen four-door, five-passenger wagon gets a few changes for 2010. Some upgrades to the instrumentation and standard cabin features this year include the addition of standard Bluetooth technology in the higher trims and an available iPod interface that's separate from the optional navigation system. Meanwhile, this compact wagon loses the turbocharged SEL trim level for this year, leaving three trims, the base S, midlevel SE, and the sporty and efficient TDI to carry the load. All three trims are front-wheel drive (FWD) only, with the S and SE trims retaining the standard inline 5-cylinder (I5) engine, and the TDI delivered with the inline 4-cylinder (I4) turbodiesel powerplant that’s claimed by VW to be the cleanest diesel on the planet. In fact, both engines are so clean that the SportWagen can claim the title of Partial Zero-Emissions Vehicle (PZEV) in states with California emissions standards.

This family-oriented hauler continues to offer 67 cubic feet of cargo room with the rear seats folded and, of course, retains its plentiful passenger space. A hefty dose of agility, meantime, remains a plus with this Euro-style wagon, though a somewhat stiff suspension isn’t overly forgiving of bumpy roads and broken pavement. Available 17- and 18-inch wheels don’t help matters much, ride-wise, but do look pretty sharp at the curb, giving a much-needed boost to an otherwise so-so exterior. Alas, seat comfort is noted by both reviewers and owners alike as lackluster, at best.

Once again, major competition for the 2010 SportWagen consists of Audi’s well-wrought A3 TDI, Subaru’s all-wheel-drive (AWD) Outback and Toyota’s Venza hatchback. All are solid cargo- and people-movers, and all are significantly pricier than the base SportWagen S trim.

The 2010 Jetta SportWagen S and SE trims sport the standard 2.5-liter inline 5-cylinder (I5) engine that powers their lower-level sedan siblings. When mated with the S trim’s standard 5-speed manual transmission or with the 6-speed shiftable automatic transmission delivered in the SE, the five-banger throws down 170 hp and 177 lb-ft of torque. Mileage is estimated at 22/30 mpg with the stick shift and 23/30 with the 6-speed shiftable automatic.

Featuring 16-inch steel wheels and a roof rack on the outside, the 2010 SportWagen S trim also boasts cloth upholstery and heated, two-way power-adjustable front seats, as well as a fold-flat front passenger seat inside. Remote power door locks, power windows and heated mirrors, cruise control, air conditioning and a center storage console also come standard with the S trim, as does an MP3-capable single-CD player with eight speakers. Both the SE and the TDI, meanwhile, sport a few standard extras, including 16-inch alloy wheels, leatherette upholstery, additional front-seat power-adjustmentability, a leather steering wheel and a leather-trimmed shift knob. Both upper-echelon trims also boast a 6-CD changer with ten speakers, Sirius satellite radio, a memory card slot and Bluetooth hands-free communications technology. By way of being just a tad different, the TDI trim level boasts a trip computer, and those TDIs equipped with the DSG auto-manual transmission are delivered with steering-wheel-mounted paddle-shifters.

Options for all 2010 SportWagen trims include upgraded 17- and 18-inch wheels, front and rear carpeted floormats, and a power tilt-and-slide panoramic sunroof. Both the SE and TDI trims are available with an iPod audio interface and touchscreen DVD navigation system.

Owners of the 2009 and 2010 SportWagen are divided over its looks, with some calling it sexy and others decrying its blandness. Seat comfort is a downer for most owners, as is VW’s reputation for iffy reliability. Finally, the lack of AWD availability, a somewhat noisy cabin, small fuel tank and a few over-engineered techno-features all have a number of owners frowning. Positive owner feedback, however, comes from the SportWagen’s nimble handing and impressive gas mileage, especially with the turbodiesel I4. A reasonable base price, capacious passenger and cargo area and the silky 6-speed DSG transmission lead many owners to use the word “value” liberally when discussing VW’s handy little wagon.

What's your take on the 2010 Volkswagen Jetta SportWagen?

Users ranked 2010 Volkswagen Jetta SportWagen against other cars which they drove/owned. Each ranking was based on 9 categories. Here is the summary of top rankings.

Have you driven a 2010 Volkswagen Jetta SportWagen?
Rank This Car

How Do I Know How Much To Charge For My Car

the car has a manual shift.

Where are the electrical ground connections other than the connection located at the battery terminal?

Factory Radio In 2010 VW SportWagon Died With CDs Inside

Factory radio in 2010 VW SportWagon died and I have a bunch of CDs in it that I need to take out. Any idea how to extract CDs from this dead radio? Thanks!

How Do I Restart The MFI In My 2010 Jetta After Changing The Battery?

I had tried to have Advance Auto put a new battery in, but they refused, saying they didn't to be responsible if the electronics got screwed up. I was like, huh? It's a battery, I've changed them a ...

193 views with 2 answers (last answer about a year ago)

I recently failed my DEQ test. P0303 cylinder 3 misfire detected. Took it to shop and they replaced ignition coil and spark plugs. They also recommend a carbon cleaning for $700 which I declined. ...