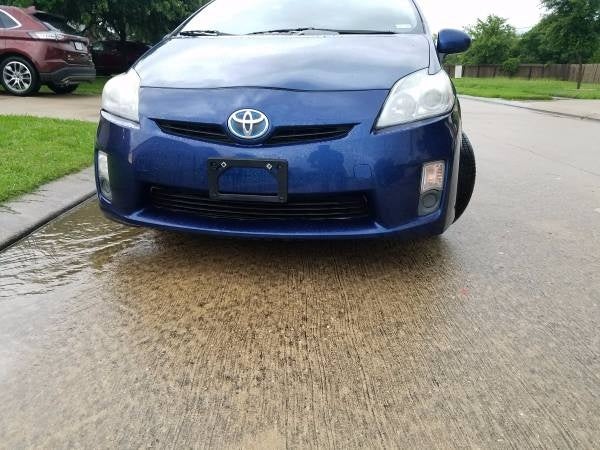 Toyota improved its iconic Prius hybrid sedan in just about every way for 2010, giving it an exterior redesign, stretching its overall length, boosting fuel economy, and adding a number of innovative features.

Even though Toyota upgraded the Prius's powerplant for 2010, acceleration remains sluggish, and some owners still have issues with visibility out the back, due to the design of the Prius's rear end.

Thanks to its new powerplant and resulting boost in fuel economy, the 2010 Toyota Prius remains one of the most fuel-efficient sedans available today. To ensure the Prius's class-leading position, the automaker also updated its platform, interior, and most of its systems, making the 2010 Prius even more desirable to its target audience, who value economy as well as the statement they make when they're seen behind the wheel of the uniquely designed sedan.

Toyota unveils an all-new, third-generation Prius hybrid sedan for 2010, with upgrades in just about every area of the vehicle. Slightly larger, better equipped, more powerful, and more fuel efficient than the version it replaces, the 2010 Prius hybrid retains the previous generation's same basic exterior design, building on the easily recognized triangular shape of a car that has sold more than 1.2 million units worldwide since its introduction. The new Prius has a more aerodynamic exterior design, with better airflow along its roofline and corners, a slightly lengthened tail, and a flat underbelly, all of which help reduce wind resistance and improve fuel economy numbers.

The Hybrid Synergy Drive under the hood of the Prius also receives an update for 2010, which results in a boost of the combined fuel economy number to 50 mpg (up from 46 mpg combined for the previous-generation Prius), making it the most fuel-efficient production vehicle currently available in the U.S. Those fuel-economy numbers split out to 51 mpg in the city and 48 mpg on the highway. However, many early reviewers and test drivers report much higher fuel economy numbers of anywhere from the mid-60s to more than 80 mpg, depending on road conditions, local terrain, and driving styles.

Toyota adds a new feature called the Touch Tracer Display to the Prius's standard equipment list for 2010. Designed to improve safety, the system helps drivers keep their focus on the road ahead by projecting virtual images of two steering-wheel-mounted touch control pads onto the dashboard's instrument panel readout. Drivers can use the control buttons to manage the audio, climate control, and other systems, and view duplicate images displayed in front of them without having to look down at the steering wheel. Other new features for 2010 include a moonroof with solar panels, an optional Intelligent Parking Assist, and a new subscription-based service called Safety Connect, which offers roadside assistance, a stolen vehicle locater, emergency assistance, and automatic collision notification.

The Prius comes in II, III, IV, and V trims for 2010. In addition, Toyota plans to introduce an entry-level, value-priced trim, called the Prius I, later in the model year. 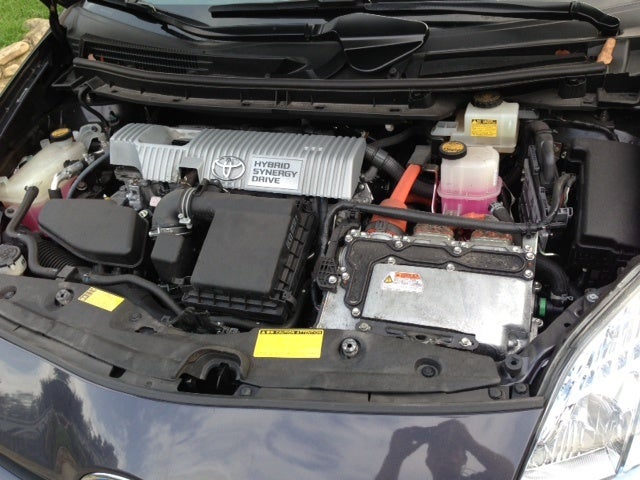 Toyota updated more than 90 percent of the Prius's Hybrid Synergy Drive powerplant for 2010. In addition to its two electric motors (called MG1 and MG2), the powerplant includes an all-new, beltless 1.8-liter Atkinson-cycle four-cylinder gas engine, which replaces the previous year's 1.5-liter engine. The new four-cylinder produces more low-end torque while ensuring optimal fuel efficiency by operating at lower rpms at highway speeds than the previous year's engine. It also delivers improved uphill performance, according to the automaker. The new gas engine produces 153 lb-ft of torque, while the electric motors and gas engine generate a combined 134 hp. The hybrid powerplant drives the Prius from 0 to 60 to 9.8 seconds.

As in previous years, the Prius can run on the gas engine alone, the electric motors alone, or a combination of the two. The new powerplant links to an ECVT, or electronic continuously variable transmission, which shifts smoothly and seamlessly. The automaker also updated the Prius's regenerative braking system, which charges the nickel-metal hydride battery when the driver applies the brakes.

Drivers can monitor the operation of the Hybrid Synergy Drive via a real-time digital readout on the instrument panel, which displays the current battery charge level, the current selected mode of operation, fuel consumption, and the flow of energy from the gas engine to the electric motor.

Toyota built the 2010 Prius on a new, more rigid platform borrowed from the Camry, resulting in better handling, less body roll in corners, and safer overall operation, according to the automaker. The Prius rides on an independent front suspension with MacPherson struts and a stabilizer bar, and a torsion beam rear suspension. Toyota also installed disc brakes at all four corners for 2010, replacing the previous year's rear drum brakes. The use of super-high-tensile steel in key areas, such as the center pillar and roof reinforcements, helps to create a stiffer body, while aluminum in the hood, rear hatch, and other areas keeps the Prius's weight down.

Inside, passengers will find a roomier cabin, with a bit more legroom in the rear and upgraded, more supportive seats. Interior storage spaces include a dual-compartment glovebox, a front center console with a removable utility tray and dual cupholders, front seatback pockets, and a fold-down rear armrest with two cupholders.

Toyota equips the Prius with a number of new features for 2010, including the Touch Tracer Display, which comes standard on all Prius trims. New optional features for 2010 includes a sliding glass moonroof with integrated solar panels, which power a new ventilation system without assistance from the engine. The ventilation system keeps the interior from becoming too warm when the car is parked, reducing cool-down time when the driver starts the engine. Owners can add the moonroof as an option on the Prius III and IV trims.

Standard features for all Prius trims include automatic climate control, a Smart Key remote entry system, a tilt/telescopic steering wheel, cruise control, and power windows and door locks. A multi-information display integrated into the centrally located instrument panel keeps drivers apprised of energy usage, fuel consumption, and trip details, as well as the operation of the hybrid system. The Prius II and III come equipped with fabric upholstery, while the IV and V offer leather seating. The Prius II includes a six-speaker audio system, which upgrades to an eight-speaker JBL system with a 6-CD changer in the Prius III, IV, and V. Bluetooth comes standard on all trims except the Prius II, while the Prius IV and V come standard with heated front seats. Options include a voice-activated touch-screen DVD navigation system, which is available on all trims except the Prius II.

Thanks to its slightly larger profile, the 2010 Prius offers more interior space than the previous year's version, including more cargo space. Seat cushions, some interior trim, scuff plates, and other interior components are made with eco-friendly plastics, which emit less carbon dioxide during their manufacture and lifecycles.

The 2010 Prius comes equipped with a full range of airbags, including dual front, front seat-mounted side, and rear side-curtain airbags, as well as a driver's knee airbag. Active headrests for front-seat occupants help reduce whiplash in the event of a collision or sudden stop. Toyota also equips all Prius trims with the Star Safety System, which includes enhanced vehicle stability control, traction control, and antilock brakes with brake assist and electronic brakeforce distribution. In addition, all Prius trims include hill start assist, which aids drivers when starting from a full stop on a hill.

Toyota offers the new Safety Connect service as an option on the Prius IV and V trims. Safety options available on the Prius V trim only include a Pre-Collision system, which adjusts the brakes and front seatbelts in the event of an imminent accident, and a Lane Keep Assist system, which reads the lane markers of certain roads and makes adjustments to the steering wheel to keep the car in the center of the lane. Also available on the Prius V are Dynamic Radar Cruise Control, which maintains a set distance behind the vehicle in front, and a next-generation Intelligent Parking Assist, which helps drivers guide the car into parking spaces.

The Toyota Prius continues to be very popular with owners, who especially love the updated exterior design, comfortable interior, and new features for 2010. Most owners in previous years bought the Prius for its fuel economy, so its boost in engine efficiency for 2010 will be icing on the cake. Even taller passengers find plenty of room in the Prius's expanded interior, and cargo capacity also gets good marks. The upgraded seats provide plenty of comfort, and new safety features and options make the Prius even more desirable. In addition, the Prius's ride, handling, easy-to-use controls, and interior ergonomics all get good marks from owners.

However, the Prius does have its drawbacks. Owners caution against driving the Prius on icy roads or in the snow, as road traction in inclement weather conditions is not one of the car's strong points. Many owners also find the acceleration lacking, though some owners admit to "hypermiling," which involves driving conservatively to boost fuel economy. Visibility out the back remains another sore spot with some owners.

Users ranked 2010 Toyota Prius against other cars which they drove/owned. Each ranking was based on 9 categories. Here is the summary of top rankings.

Have you driven a 2010 Toyota Prius?
Rank This Car

Why Is My Listing Over Priced?

Why is my listing considered "over priced" and other cars just like it and priced the same as my listing is listed as a good deal?

How Do I Take Payment When Buyer Drives Car Away?

I Have Photos Of The Car I Am Selling. How Do I Upload To CarGurus?

How Do I Upload Photos Of The Car I Am Selling

What do you feel the cost of a new short block should run?