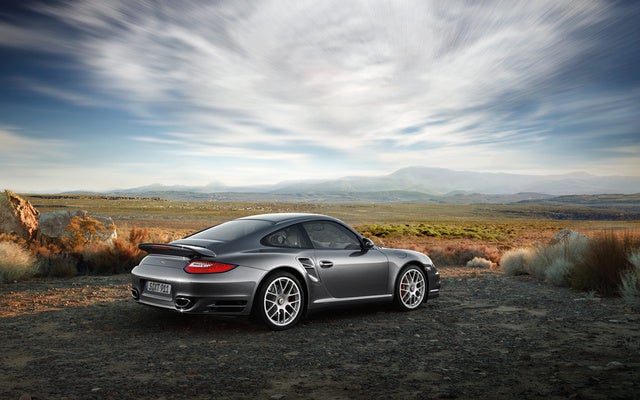 For a car that has changed so little over the past four decades, the 911 sure doesn’t stagnate. Side by side, a 2010 911 looks very much like its '60s ancestors, and the engine was even still air-cooled until the final years of the 20th century. I suppose it speaks to Porsche’s purity of vision that its centerpiece can remain so true to form, despite near-constant revision. While the more tame breeds of 911 were revamped last year, there are no shortage of updates for 2010. Before we get too deep into what’s new this year, let me tease you with one figure: 500 twin-turbocharged horsepower. Chew on that while we work our way up the trim lineup.

The old standby Carrera comes in rear-wheel-drive (RWD) and all-wheel-drive (AWD) iterations, in both coupe and convertible configuration. These base trims get 18-inch alloys with performance tires, leather upholstery, a touch-screen digital interface, and a 345-hp, 3.6-liter flat six engine. Both are available in standard and S trims, the latter of which will net you an additional 40 hp, 22 lb-ft of torque, an active suspension, unique steering wheel, and 19-inch alloys. The convertible version is designated “Cabriolet” by Porsche and comes with a power soft top. There’s also a Targa trim that follows the same format, except with a 4-sq-ft sunroof and opening rear hatch. All are available with either a six-speed manual or Porsche’s Doppelkupplung (PDK) seven-speed double-clutch automatic.

These trims received substantial attention in 2009, a year that also saw Porsche dropping its race-inspired – some would say race-ready – GT3 trims. Looks like they were just readying them for 2010, since they’ve now shown up with most of the improvements the rest of the lineup got in 2009.

Since we’re Americans, let’s start in the most appropriate place – displacement. The 3.6-liter flat six in the GT3 has been bored out to a full 4 inches, increasing displacement to 3.8 liters. Yes, that’s the same size as the engine in the S trims mentioned above, but here the engine puts out a rubber-wrecking 435 hp, thanks to hotter cams and variable valve timing on the exhaust to match the intake. All this, and the redline even increases 100 rpm, to 8,500 here. But Porsche was never one to improve one aspect of their vehicles and ignore the rest, and the GT3 is no exception. Brakes have been upgraded and redesigned to be both larger and lighter, and if you so choose, you have the option of ceramic composite brakes with aluminum carriers that will shave 44 pounds off the old system in all. The standard braking system is monumentally competent, but this ceramic system threatens to tear the rubber right off the new center-lock wheels. These utilize the same large, single lugnut that was introduced previously on the Carrera GT, and they save almost 7 pounds of unsprung weight.

Of course, suspension and aerodynamics were massaged as well, with 12 percent stiffer front springs, revamped anti-roll bars, and recalibrated shock absorbers. More impressive are the aerodynamic enhancements, however, which literally triple downforce at speed - from 66 pounds at 186 mph to an incredible 220 pounds. If that’s not enough to impress – and Porsche enthusiasts are notoriously hard to impress – feel free to upgrade to the GT3 RS. That’ll earn you another 15 hp, a 1.7- and 1.0-inch-wider stance front and rear, a giant carbon-fiber wing, and a weight savings of about 50 pounds. That will come partially from titanium exhaust components and a lithium-ion battery, amongst other measures. The GT3 RS also comes standard with Porsche’s Active Engine Mounts, available as an option on the GT3. Both cars come exclusively with the six-speed manual, although the GT3 gets shorter gear ratios than those available for the Carrera and Targa trims, and the GT3 RS cuts them down even more.

Did someone say something about 500 twin-turbocharged horses? How about a near-matching 480 lb-ft of torque from the 911 Turbo’s direct-injected, 3.8-liter twin-turbocharged flat-six? Use the Overboost feature that comes with the Sport Chrono Package, and that torque figure can jump up to 516! Don’t forget a revised suspension, 19-inch wheels, and AWD utilizing both Porsche Stability and Active Suspension Management systems. And since none of this is particularly distinctive from the outside, the 911 Turbo gets some unique body treatment as well. For the added power of this year’s 911 Turbo, the center differential has been updated and reinforced, and for optional added stability, the all-new Porsche Torque Vectoring (PTV) system can utilize active braking for the inside rear wheel during hard cornering.

It’s amazing that this many changes can be registered in a single year, and yet today’s 911 would still be instantly recognizable to an owner from 1964. It’s because the essence of the vehicle has remained intact, despite electronic enhancements and steering aids and any other number of possible complaints. That said, if any 20th century time travelers show up at your door, begging to borrow your new 911, it’s probably best to keep the keys to yourself. No amount of purity of vision can overcome the near-400-hp increase between the 911 of 1964 and today.

Paul Liked it well enough that I bought one.

Users ranked 2010 Porsche 911 against other cars which they drove/owned. Each ranking was based on 9 categories. Here is the summary of top rankings.

What Is The Answer On Why The 100 Mile Search Radius Limit??

I see the question over and over. The answer is...?

Is There A Console Button For The 911 That Will Enhance The Exhaust Note Ov...

How Do I Relist The Porsche In Our Account?

I swapped a 2010 Carrera S engine lid out with a 2010 Turbo lid and the air box inlets don't line up. Not opposed to buying a Turbo air cleaner box cover, but want to make SURE that'll fix the issue. ...

Which Sport Suspension Option Offers The Smoothest Most Comfortable Drive

i'm a first time porsche owner. just purchased a used 2009 911s (but only 5k miles). curious as to a recommendation for which sport suspension option is the most comfortable driving option for norma...