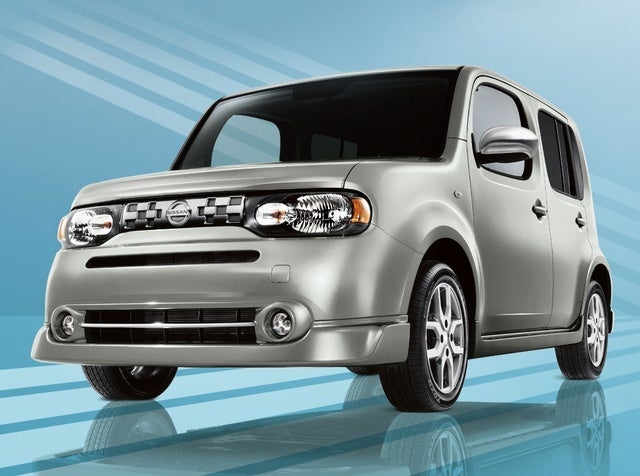 Now in its second year of production, the Nissan Cube receives a number of updates for 2010. While the base 1.8 trim remains unchanged, the mid-level S and upper-end SL trims now come equipped with such standard features as Bluetooth and a leather-wrapped steering wheel with audio controls. The S trim also receives an iPod interface and speed-sensitive volume as part of its standard audio system. In addition, the upscale 1.8 S Krom Edition receives a new 4.5-inch color audio display with a USB interface and a rear-view camera, as well as a Nissan Intelligent Key with push-button ignition, which all come standard for 2010.

A 1.8-liter, DOHC four-cylinder engine powers all four Cube trims. The engine features variable valve timing for improved efficiency and produces 122 hp and 127 lb-ft of torque. It drives the Cube's front wheels through either a six-speed manual transmission or an Xtronic CVT (Continuously Variable Transmission), which delivers smooth shifts, according to reviewers. The EPA estimates fuel economy numbers for the engine at 25/30 mpg with the manual shifter and 27/31 mpg with the CVT.

The aptly named Cube continues to stand out from the crowd, thanks to its tall, boxy shape and its unique asymmetrical wrap-around rear window. Nissan says the Cube's front grille was inspired by a bulldog wearing shades, and gives the windows a distinctive trim treatment for a photo-frame appearance. All trims include privacy glass, while the SL trim comes with automatic on/off headlights as a standard feature. The S Krom Edition sports such features as unique barred upper and lower front grilles, body side sills, fully integrated front and rear bumper fascias, and a rear roof spoiler, all of which set it apart from the other Cube trims.

The Cube's design not only makes it distinctive, but also results in a roomy, functional interior. It seats up to five passengers, with manually adjustable front seats and a sliding/reclining/fold-down rear seat, adding to the Cube's versatility. The curvy dash ripples across the front of the cabin, while above, concentric circles emanate from the overhead light, creating a "water drop" affect.

With the rear seat folded down, the Cube offers a respectable 58 cubic feet of storage space. A side-opening, refrigerator-style rear door provides easy access to the cargo area.

All Cube trims come well-equipped with all the basics, including air conditioning, power windows and door locks, a multi-function trip computer, remote keyless entry, a tilt steering column, cargo tie-downs, six cupholders, and five bottle holders. The S and SL trims add such features as a leather-wrapped steering wheel, Bluetooth, cruise control, map lights, and chrome handles, while the SL trim also includes automatic temperature control. An AM/FM audio system with a CD player and an MP3 input jack keeps passengers entertained in all trims, although the two-speaker system in the Base 1.8 trim upgrades to a six-speaker system in the S and SL.

All trims come with cloth upholstery, although the S and SL receive premium cloth seats. The S Krom Edition adds a custom interior with exclusive black and gray seats, aluminum-trimmed pedals, and a Rockford Fosgate audio system with a subwoofer, among other features.

Owners can customize the Cube with a wide range of options, such as splash guards and a shag dash topper, available on all trims. Options available only on the S, SL, and S Krom Edition include a cargo organizer, 20-color interior accent lighting, illuminated kickplates, and an exterior Aero Kit, which adds a front chin spoiler and a rear underbody spoiler, as well as body side sills and a rear roof spoiler.

GuruYYTJB The Krom has water leak problems. I've had very costly repairs and it still leaks and smells of mold. Nissan would not stand behind their Cube Krom even though they are very much aware, I would like to start a class action suit.

Have you driven a 2010 Nissan Cube?
Rank This Car

singinfred asked a 2010 Nissan Cube 1.8 S General question about a year ago

Can You Switch Me To Only CALIFORNIA. NISSAN CUBES IN CALIFORNIA ONLY. FO...

ONLY CALIFORNIA. NO OTHER STATE FOR USED NISSAN CUBE.

Hello. How Long Does It Take To Sell A Car On These Used Car Websites? This...

Not sure if this is the best way to sell a vehicle.

I Put My Car On Cargurus.com And I Cannot Find It On Here When I Search The...