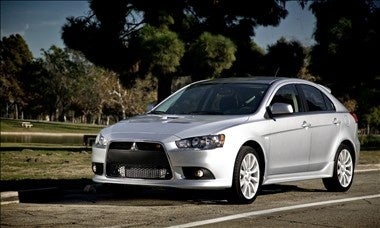 The 2010 Mitsubishi Lancer Sportback delivers smooth, road-hugging performance, plenty of gadgets, and the utility of a hatchback with an exterior style sure to attract attention.

The 2010 Lancer Sportback falls short of the competition when it comes to fuel efficiency, interior material quality, and overall cargo area. 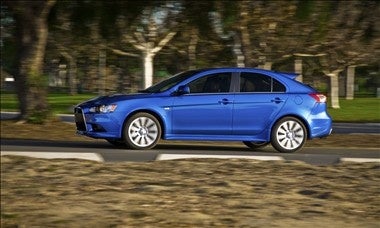 A five-door with a styling edge and excitement under the hood, the 2010 Mitsubishi Lancer Sportback debuts with a splash. Despite some drawbacks (mileage, interior charm) the Sportback is worth a look if you want a versatile vehicle with plenty of spark.

Welcome to the Mitsubishi Lancer Sportback, making its debut for 2010. This hatchback version of the Lancer sedan provides extra cargo room, sporty performance, and uniquely aggressive styling, an exciting mix of elements that sweeps away any of the “boring” connotations of a hatchback.

The Sportback debuts with only two trims – the GTS and Ralliart, the two high-end trims of the Lancer sedan lineup that lend many of their features to the Sportback sedan. The 168-horsepower GTS features a standard five-speed manual transmission, a sport-tuned suspension, chrome exhaust, rear spoiler, full power accessories, automated climate control, Bluetooth, and a six-speaker stereo. The Ralliart gets the GTS’s full and impressive list of features and a 237-hp turbo engine, all-wheel drive, and a six-speed dual-clutch automated manual transmission.

The Sportback delivers on the performance end with a ride that can satisfy on mountain curves or in around-town traffic. Its cargo functionality is somewhat compromised by the angle of the rear hatch, which may have trouble closing over larger items. And if that rear cargo area is completely full, the driver’s rear sight lines will be compromised. This detracts somewhat from the vehicle’s utility, but by folding the rear seats totally flat, many of those problems dissolve in the extra, more-accessible space. Plus, that sloping rear hatch, the standard side moldings, and the aggressive rear end give the Lancer Sportback a distinctive, head-turning flair.

In short, Mitsubishi has produced a versatile and fun five-door that can immediately compete with the Subaru Impreza WRX and the Mazdaspeed3 as an affordable hatchback that can haul a family and its gear during the week and party on winding back roads for the weekend.

The Lancer Sportback GTS trim is powered by a 2.4-liter inline four-cylinder (I4) that produces 168 horsepower and 167 lb-ft of torque and is paired with either the standard five-speed manual transmission or an optional automatic Continuously Variable Transmission that includes a manual mode operated by paddle shifters. The GTS gets 20 city/27 highway/22 combined mpg with the manual transmission and 21/27/23 with the CVT. With the five-speed, the GTS can go from 0-60 in 7.7 seconds.

The Ralliart comes with a 2.0-liter turbocharged I4 (237 horsepower, 253 lb-ft of torque) mated to Mitsubishi’s six-speed Twin-Clutch Sportronic Shift transmission. This automated manual eases the driver’s shifting burden in heavy traffic and also allows for quick gear changes during more spirited driving, giving the Ralliart fantastic flexibility. The Ralliart gets 17 city/25 highway/20 combined mpg and gets from 0-60 in a very tidy 5.8 seconds.

This is where the Lancer Sportback shines. Its rigid body construction and sport-tuned suspension with McPherson front struts provide stability and grip in corners without sacrificing comfort. A responsive steering feel augments the already nimble handling. The 2.4-liter I4 in the GTS has ample low-end power and willingly gives more at higher speeds. The Ralliart is ready for any situation with its turbocharged engine and quick-shifting dual-clutch transmission.

The Ralliart’s performance, not to mention safety, is further enhanced by its automatic all-wheel drive (AWD) system. This AWD uses an intelligent center differential to shift the torque from front to rear axle, depending on road conditions and driver inputs. Limited-slip differentials in the front and rear manage power on slick surfaces to increase the Ralliart’s grip.

The Sportback’s gauges are easy to read, and the audio, climate, cruise, and Bluetooth controls are well placed. Testers also like the intuitive placement of the paddle shifters – downshifts on the left, upshifts on the right. As long as the rear isn’t bursting with cargo, the sight lines are adequate, despite thick rear roof pillars. Mitsubishi unfortunately missed the ergonomic mark with some of its seating. The driver’s seat may feel awkward for taller drivers due to few seat adjustments and the tilt-only steering column. The rear seats, however, are comfortable for long or short trips - or people.

A hatchback is supposed to have extra cargo space, and when the Lancer Sportback's rear seats are folded down, it offers 47 cubic feet, or three more cubes than offered by the Subaru WRX. The GTS adds about 5.7 more cubic feet of space in the rear with its removable cargo floor hiding bin (not available in the Ralliart). With the back seats up however, the Lancer Sportback has just 14 cubic feet of rear space beneath the steep hatchback, much less than the 19 feet offered here by the WRX and the 16.5 of the Mazdaspeed3.

The interior has a dark feel to it, which partially obscures the prevalent hard plastics that many critics dislike. The darkness and low-end feel of the plastics is broken up by chrome and silver accents that dot the cabin – on the gauges, knobs, and inner door handles – and the leather on the steering wheel, shift knob, and parking brake. Both trims feature cloth seating trim (the Ralliart’s is marketed as “premium”) with a six-way adjustable driver’s seat and a four-way adjustable passenger seat.

Mitsubishi emphasizes safety with the Lancer sedan, and did the same with its hatchback cousin. Both Sportback trims come standard with an antilock braking system with electronic brakeforce distribution, active stability control, traction control, an active front seat structure to reduce whiplash, and a tire pressure monitoring system. Standard airbags include advanced dual-stage for the front, side-impact curtain in the front and rear, front seat-mounted side, and a driver's side knee airbag. 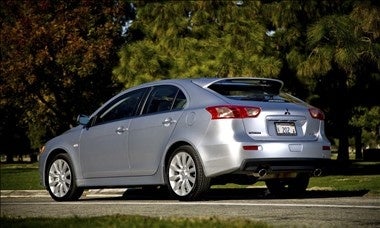 Lancer Sportback owners love the car’s engine and transmission, praising its available power off the line and at higher speeds as well as its smooth shifts. The handling is another high point, as many love the “feel” of this vehicle on long straights and in corners. Some complain about feeling any medium or larger bumps or holes in the road, though others feel the ride is smooth in all conditions.

Common complaints center around the Sportback's gas mileage, the small rear cargo area with the back seats up, and the cheap dashboard material, which scratches easily. While these negatives may aggravate over time, the Sportback’s handsome looks and top-flight performance seem to outweigh them.

What's your take on the 2010 Mitsubishi Lancer Sportback?

Users ranked 2010 Mitsubishi Lancer Sportback against other cars which they drove/owned. Each ranking was based on 9 categories. Here is the summary of top rankings.

Have you driven a 2010 Mitsubishi Lancer Sportback?
Rank This Car

What Is The Cist For Posting?

What Is The Best Diesel Additive