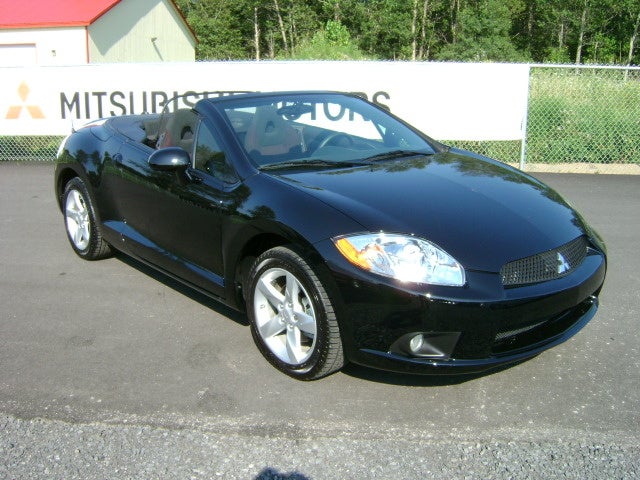 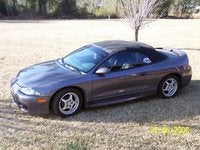 The Mitsubishi Eclipse Spyder is the drop-top version of the long-lived, front-wheel-drive 2-door hatchback Eclipse. 2006 saw a full redesign of the model, and a slight refresh happened only last year. With its power top, glass rear window, and structural enhancements, the Spyder weighs 200 pounds more than its rigid-roof relatives. This means both positives and negatives for owners, with a slight acceleration penalty due to the extra weight, but also increased compliance and composure over rough surfaces. The convertible seems to suffer no handling penalty, surprisingly, although large bumps will rattle the chassis enough to resonate through to the cabin, much to the pilot’s distress. Similarly, noise from tires, engine, and wind - slightly annoying in the coupe - is only exacerbated in the Spyder.

The Eclipse Spyder comes in GS and sporty GT trims, each with distinct engines and transmissions. The GS gets a 162-hp, 2.4-liter four-cylinder engine mated to a five-speed manual transmission, with a four-speed Sportronic shiftable automatic as an option. With the manual, the four-cylinder is sprightly away from the line, but comes up lacking at higher revs, requiring frequent shifting to stay in the optimum power range. The automatic comes with a slight acceleration penalty, but suffers from the same high-speed power drop. The GT gets a torquey, 265-hp, 3.8-liter V6 with a standard six-speed manual transmission. A five-speed Sportronic is also an option, but the manual is really where the fun is, motivating the GT to 60 mph in around 6.5 seconds.

The top drops via a one-push button in a matter of 19 seconds, and the Spyder gets several upgrades over the coupe, even at the base GS trim level. An upgraded 360-watt Rockford Fosgate stereo with CD changer, MP3 capability, and satellite radio has controls on the tilt steering wheel, and foglights appear in the front fascia. Power windows, mirrors, and door locks are all standard with the GS, as well as remote keyless entry, air conditioning, cruise control, 17-inch alloys and a theft-deterrent system. Standard safety features are equally impressive, with dual front, front-side, and curtain-side airbags, antilock four-wheel disc brakes, daytime running lights, and a tire-pressure monitor.

GTs additionally get a stainless-steel exhaust system, foglights, 18-inch alloys, anti-skid, traction control, and a sport suspension. It’s those last three features that really make the difference with the GT, other than the V6, providing the closest experience to the sporty pretensions that the Eclipse has always carried.

What's your take on the 2010 Mitsubishi Eclipse Spyder?

Have you driven a 2010 Mitsubishi Eclipse Spyder?
Rank This Car