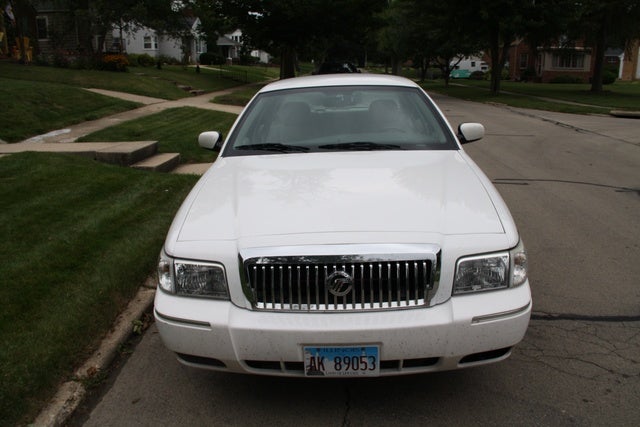 Lots of passenger and trunk space as well as cushy seats complementing an equally cushy ride provide a certain appeal for the 2010 Mercury Grand Marquis.

Tepid handling, an ancient design, lackluster power, and a thirst for fuel could presage the 2010 Grand Marquis’ swansong.

The 2010 Mercury Grand Marquis is definitely your father’s MGM. Unless a lot of trips to and from the airport, with their accompanying loads of luggage, are in the cards, this aging sedan is best left to the mists of history.

Rumored to be in its penultimate year, Mercury’s Grand Marquis for 2010 remains mired in the 1990s. Long a favorite of airport limo services and police departments nationwide, these particular owners might be asking themselves how they can replace this venerable boat that comes in but one trim level, the LS. The answer may be: with just about anything else out there.

Bulky, and bedeviled with an anemic drivetrain long past its prime, this six-passenger sedan is rarely seen on dealer lots except in its older incarnations, since the 2010 version is often available only via special order. Because this aging vessel is essentially unchanged since the Clinton years, prospective owners, who may not have the wherewithal to spring for the similarly retro Lincoln Town Car, may opt for a pre-owned Grand Marquis to get pretty much everything the 2010 trim carries at far less cost. Additionally, simplistic technology and a straightforward chassis mean a tradition of reliability, not to mention a significant savings in maintenance and repair costs.

Though offering a cushy ride, roomy interior, and massive 20.6-cubic-foot trunk, the 2010 Grand Marquis is still saddled with a dated design, unsupportive seats, and an anemic V8 that nets less horsepower than many recent V6s. Nearly any of the more up-to-date offerings on the large sedan market, including the Toyota Avalon, Hyundai Genesis, Chrysler 300, and Ford Taurus, will out-run, out-pamper, and outshine the lusterless Grand Marquis and certainly offer equal value.

Powering – if you want to call it that – the 2010 rear-wheel-drive-only (RWD) Grand Marquis is a 4.6-liter Flex Fuel V8 accompanied by a long-in-the-tooth four-speed automatic transmission. This combination is neither particularly potent nor especially efficient, netting 224 hp at 4,800 rpm and 275 lb-ft of torque at 4,000 rpm, with an EPA rating of 16/24 mpg. The Flex Fuel designation indicates the engine can burn both regular unleaded and E85 ethanol fuel.

At least one road test has the Grand Marquis’ V8 pegged from 0-60 in 8.5 seconds, which is a darned respectable time – for a modern four-cylinder powerplant. The ancient engine is noted by some reviews as tolerable around town, but the four-speed automatic has been described as problematic when merging and passing, making highway driving a matter of some foresight, preparation, and, likely, a bit of prayer.

Rolling on 17-inch painted alloy wheels, the 2010 Grand Marquis is supported by a long-and-short-arm front independent suspension, front and rear stabilizer bars, and a solid axle rear suspension that, in combination with its hefty body, provide a soft and bump-forgiving ride at the cost of little road feel except a traditional floaty sensation that would drive a true driving enthusiast nuts. Furthermore, this big sedan is tough to deal with in crowded parking lots because of its 40-foot turning radius and 212-inch overall length.

A load-leveling rear suspension lends a hand to prevent excessive body lean in corners, and rugged four-wheel disc brakes provide true and effective stopping power, even in emergency situations. Steering, however, is far too light to engage the road with any sort of meaningful touch.

Most reviewers are fine with the 2010 Grand Marquis’ compliant ride, but not so impressed with its lackadaisical road feel. Virtually all reviews comment that ride and handling qualities suit the trek back and forth to the airport or the haul to the station house, but find little else to recommend this laid-back limo.

Face it: You know things have come to a sorry pass in a modern automobile when a cassette deck is listed among its major options. Notwithstanding this triumph of 1970s technology, standard amenities for the 2010 Grand Marquis are adequate, if not especially state-of-the-art, with six-passenger seating, leather upholstery, split-folding rear seats, digital keypad power door locks, power windows and heated mirrors, leather-wrapped tilt/telescoping steering-wheel with mounted cruise controls, overhead console, air conditioning, simulated wood trim on the dash and doors, front and rear carpeted floor mats, and a single-CD-player with four speakers.

In addition to the aforementioned cassette deck, 17-inch spoked chrome wheels, wood and leather-trimmed steering wheel, heated seats, steering-wheel-mounted audio controls, and power-adjustable pedals are all available for the 2010 Grand Marquis, while, alas, such modern conveniences as DVD navigation, SYNC technology, and rear-seat entertainment are not.

Though considered reasonably straightforward, the controls and buttons in the Grand Marquis are demeaned as ill-placed and lacking in sophistication by most reviewers. Numerous reviewers also note that interior ambiance is distinctly non-limo-like, despite the standard leather seating. Passenger room is typically abundant with plenty of headroom. However, the bulging driveline hump keeps middle-seat passengers with knees in chin, while outside passengers will contend with seats that have poor lateral support, leading to much sliding and grasping in even moderate cornering. All reviewers additionally consider the seats too soft for long-distance riding comfort, while expansive doors, though aiding entry and exit, make rub strips worth their weight in gold.

If there’s one thing about which the 2010 Grand Marquis can perhaps boast, it’s an admirable, though not perfect, record in government safety testing. The National Highway Transportation Safety Administration (NHTSA) gives this veritable tank five stars across the board in its testing, including rollover protection. The Insurance Institute for Highway Safety (IIHS), meanwhile, rates the Grand Marquis as Good, its highest score, in frontal impact testing, but only awards a next-to-lowest rating of Marginal in side-impact tests.

Strangely, poor cupholder placement seems to have replaced mileage concerns and antiquated styling atop the list of common complaints owners have about the 2010 Grand Marquis. Maneuverability in the average parking lot, as well as the lack of standard heated front seats, also have been noted as detracting from the overall ownership experience, while, if current owner reviews are any indication, a distinct lack of driving excitement keeps much of the under-50 crowd from exploring this artifact from a bygone era.

Loyal devotion to the party line, however, dominates most owner evaluations of this large sedan, with many surprisingly lauding better-than-expected fuel economy, admirably low maintenance and repair costs, a plush ride, and the basic reliability of its traditional and simple build quality. Also noted among the more positive ownership experiences are the Grand Marquis’ huge trunk, roomy if slightly stodgy cabin, and plain old value for the money.

What's your take on the 2010 Mercury Grand Marquis?

John The tape deck was a triumph of 70's technology, but the cd/dvd player was never a triumph of technology in a car. You could hit a tape deck with a hammer and it would keep playing but if you shut a door too hard a cd/dvd player will skip 20 seconds. Cds/dvds are also made out of too low quality of plastic and they are read by lasers that are too powerful which slowly melts them each time they are played. More info can be found here: http://www.scienceagogo.com/news/20040407020458data_trunc_sys.shtml tl;dr tape decks are more luxurious than cd/dvd players because they work better and for longer

Have you driven a 2010 Mercury Grand Marquis?
Rank This Car

CD Player Will Not Keep CD

CHANGE OIL SOON LIGHT has been at 6 month interval for 2 years, but now just came on after 3 months since my last change, which I do myself. I drive 5000mi a year. The dipstick is to the full mark...

Entry Code Where Can I Find The Code

Where can I find the keyless entry code

Why Does My Heat Just Stop Working

Where Is The Compressor Llocation