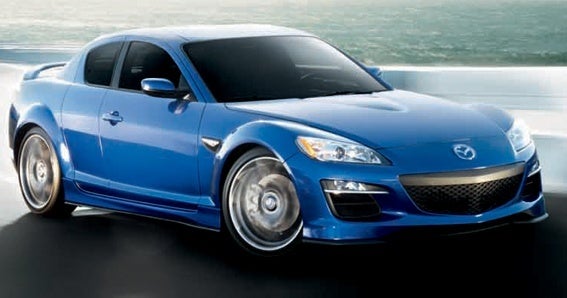 Blame it on videogames and Vin Diesel, because if it weren’t for releases like Gran Turismo and "The Fast and the Furious," we might never have seen another rotary-engine Mazda. Until the late '90s, people just didn’t seem to care about Japanese tuning and racing. Sure, the Miata was doing well - mostly because it was the only roadster on the market for a long while - but it just wasn’t generating the kind of interest or income that would revolutionize an industry.

Lucky for us, the revolution did come, and it was televised. Mazda’s foray back into rotary engineering came in 2004 with the introduction of the RX-8, the 2+2 successor to the much-maligned RX-7, last seen in the U.S. in 1995. Unfortunately, the RX-8 still has many of the problems of its predecessor.

Available in Sport, Grand Touring, and R3 trim levels, the rear-wheel-drive RX-8 is powered by a 1.3-liter rotary engine, good for 232 hp in manual and 212 hp in automatic configuration. Because of the unique design of the rotary engine, however, those numbers aren’t achieved until 8,500 and 7,500 rpm, respectively, and are accompanied by less-than-impressive torque figures of 159 lb-ft at 5,500 rpm. This translates into an extremely high-revving engine that seems to lose much of its motivation at anything below those numbers. Couple that with the fact that the RX-8 requires premium-grade gasoline and manages EPA estimates of only 16/22 and 16/23 mpg with the manual and automatic, and people start wondering, “What’s the point?”

The point is that the engine has an incredibly low displacement of only 1.3 liters, which means not a lot of weight up front. The result is a weight distribution that's nearly 50-50 front to rear and handling that is at the top of its class. Keep the revs high, and there’s little out there that’s more fun to drive. Let them drop, and you’ll find yourself chugging along, wondering why the hell you’re spending so much money on fuel. That said, the RX-8 doesn’t exactly deliver a comfortable ride. Although Mazda claims seating for four adults, the front offers adequate space only for those under 6 feet, and the rear is an exercise in masochism. However, mention should be made of the use of suicide rear doors that do aid in entry and exit, if for some reason you’d ever want to get to the back seat. Designed to operate only when the front doors are open, the rear doors when shut provide the structural rigidity, along with the front doors, that allows for the omission of the B-pillar in the RX-8.

Comfort aside, the RX-8 is well-equipped in all three trims, with power everything, 18-inch alloys, a leather-wrapped tilt steering wheel, and antilock four-wheel disc brakes. A limited-slip differential is standard on manual-equipped Sport trims, and standard on Grand Touring and R3 trims, along with traction control. The Grand Touring trim adds several nice features, like heated leather front bucket seats, keyless access and start, a power sunroof, Bose stereo, and automatic Xenon headlights. The R3 is touted as the high-performance model, and as such comes with a sport-tuned suspension and 19-inch alloys.

The RX-8 has seen a welcome reception in the eyes of the press and enthusiasts, winning awards and besting cars like the Audi TT and Nissan 370Z in comparison tests. On the track, that may be true, but there’s more to a car than just numbers. Driveability counts. The fact that so few of us are routinely cruising along at 6, 7, or 8,000 rpm needs to be taken into account here, otherwise the unique RX-8 with the quirky rotary engine will never be anything more than an enthusiast's vehicle.

What It Called When A Car Has A Digital Mph Counter?

Every single car has a speedometer, but for the ones that have a number displayed, what is it called? Digital mph counter?

does anyone have the 2010? i'm interested in finding out more about it.. it will be used as the fun car for my wife and i...