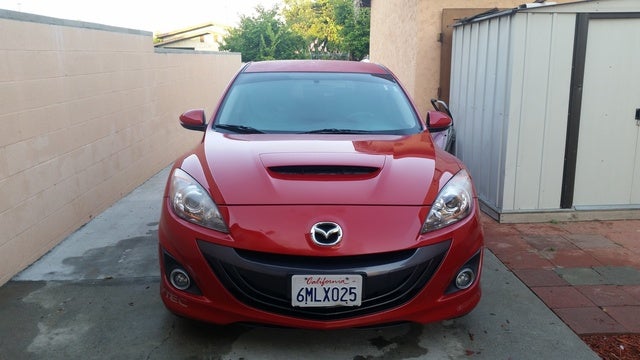 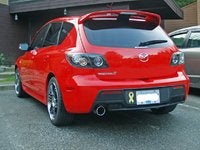 Last year, the 2009 Mazda MAZDASPEED3 earned third place in Motor Trend’s “Small, Fast, Fun” comparison, and apparently Mazda wasn’t happy with that. For 2010, the MAZDASPEED3 underwent an extensive redesign and styling upgrade that resulted in improvements to the transmission, suspension, and electronics, as well as fresh and functional aesthetic changes.

Just like the rest of the Mazda line, this front-wheel-drive hatchback gets the Nagare treatment, a Japanese word translating to “flow,” resulting in a new lower air dam and hood scoop bookending the new smiley-face grille. Following along the side, new side skirts lead the eye around the vehicle, showing off the larger-diameter dual exhaust tips, a larger wing, and wheels that have increased in width by half an inch.

The big changes happen under the skin, specifically in the suspension. Stiffer springs and increased damping improve both the MacPherson front strut and multi-link rear suspension, and thicker sheetmetal in high-stress locations results in what Mazda claims is a 2% increase in torsional rigidity.

The six-speed manual transmission has also been reworked with taller gearing for all but first and sixth. This, in conjunction with a larger hood scoop producing increased airflow and a new intake duct, was applied in an effort to increase overall efficiency. Braking and steering have been similarly reworked, ditching the respective mechanical and hydraulic systems for electronic units that provide an unevenly progressive ratio for the steering and an assist system for the braking. Mazda also added a torque-sensing conical limited-slip differential and a re-engineered torque-management system to deal with all the power put out by the direct-injected, 2.3-liter, turbocharged, 263-hp four-cylinder engine.

A unique interior shows off its namesake, with a MAZDASPEED3 emblem and red stitching on the bucket seats, as well as an LED boost gauge in the otherwise standard cluster, a first in the MAZDASPEED3. For those who want a bit of luxury, grab the optional Tech Package to add keyless ignition, a 5-channel Bose 6-CD satellite radio, and a navigation system with alarm.

With all these upgrades, it looks like Mazda is aiming for first place this time around. The 2010 MAZDASPEED3 won’t be released until November, however, so we’ll have to wait to see if they got it right.

What's your take on the 2010 Mazda MAZDASPEED3?

Have you driven a 2010 Mazda MAZDASPEED3?
Rank This Car

Should I Keep My Speed 3?

Is the Mazda speed 3 hatchback expensive on insurance compared to other sports car that are coupes?

Really Nooby Question Here, When You Look Inside The Wheel Of A Car, The Re...