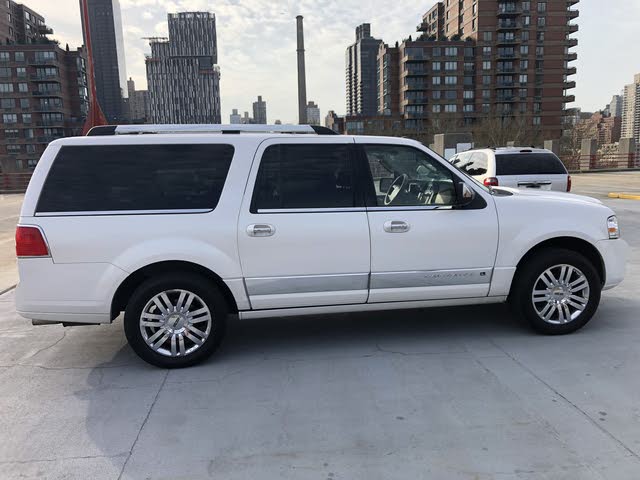 Once the swank-mobile of choice for the Beautiful (and wealthy) People, the 2010 Lincoln Navigator has lately become a symbol of crass ostentation. This doesn’t mean, however, that the Navigator is any less luxurious or impressive, with a plethora of chrome, leather, wood, satin nickel, electronic gizmos, power accessories, and sheer luxury continuing the Lincoln tradition of overstated opulence.

Basically unchanged since a significant re-design for 2009, the five-door, seven-passenger 2010 Lincoln Navigator full-size SUV is available in two trims, the Navigator Base and Navigator L, with unique badging, as well as leather, chrome levels, and available options being the essential distinguishing features. Each trim is offered with either rear-wheel drive (RWD) or four-wheel drive (4WD), and each offers more than 130 cubic feet of cargo area with the rear seats folded.

The sole powerplant available in the 2010 Lincoln Navigator is a recently tweaked 5.4-liter SOHC Flex Fuel V8 that offers variable valve timing and is capable of burning E85-ethanol fuel or regular unleaded gas. The 5.4-liter V8 puts out 310 hp and 365 lb-ft of torque and is harnessed to an overdrive-equipped six-speed automatic transmission. This combination is good to tow some 9,000 pounds of trailer when the Heavy-Duty Towing Package is opted for, and is rated by the EPA at 14/20 mpg in the RWD configuration.

The 2009 Lincoln Navigator has owners divided regarding its exterior styling, with some approving, and some not so much. Mileage is a downer for those owning the ’09 Navigator, as is a poor sound system, wind noise, and a lack of serious giddy-up. On the positive side, the wealth of power accessories, SYNC audio-integrated hands-free communications system, ride quality, and overall comfort and spaciousness has owners feeling satisfied, overall, with their choice of the ’09 Lincoln Navigator.

What's your take on the 2010 Lincoln Navigator?

Cabriolet_2164 Getting ready to buy one for my wife

Users ranked 2010 Lincoln Navigator against other cars which they drove/owned. Each ranking was based on 9 categories. Here is the summary of top rankings.

Have you driven a 2010 Lincoln Navigator?
Rank This Car

We replaced air bags in air suspension system and put in a new compressor. The compressor will not turn on to air up the system. Fuse is good. What can I troubleshoot ??or how can I Hotwire to s...

Where in the SUV is the THX Amplifier located - it is part number AL7Z- 18B849-C per the local Lincoln Dealership - from what they told me it is not under the center console from what I can see when ...

Have warning lights coming on. 1. Tire pressure 2. Brake 3. Door ajar also my running boards aren't working, a/c and radio aren't working this happened all at once

Total Miles Per Tank On Highway

Thinking of driving from Bama to Cali. Just curious how many miles per tank am I looking at or is it cheaper to have it shipped?

After inserting Disc 1 Of the System Update in my 2010 Lincoln Navigator the first screen came up saying installing Disc 1 this could take up to 25 minutes. The progress bar never moved off 0%. After ...