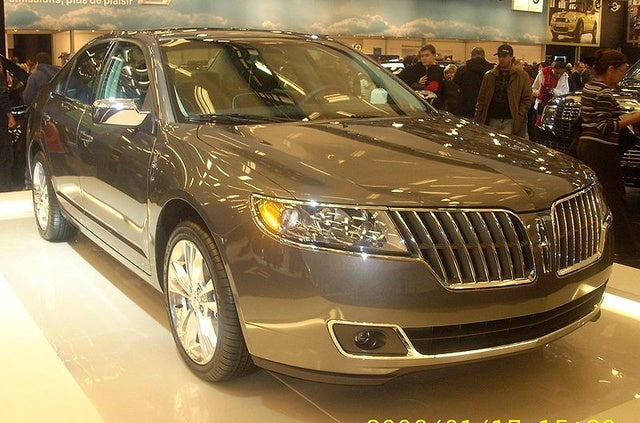 A comparatively tepid V6, cramped rear-seat quarters, and a bit of reticence on the part of the standard six-speed auto-manual transmission, as well as a bland road touch, keep the 2010 MKZ well under its potential.

A sports car it isn’t, but the 2010 Lincoln MKZ does a pretty decent job of being a high-end family sedan. A bit more pizzazz here, a few more horses there, maybe a pinch of road prowess on top, and no telling how far this pseudo-plush auto might go in giving the Lexus ES 350, Infiniti G37, and Cadillac CTS a run for their money.

Some attractive and uniquely Lincolnesque styling tweaks, especially to the front and rear fascias, set the 2010 Lincoln MKZ five-passenger sedan apart from its Ford Fusion and Mercury Milan siblings. Additionally, upgraded, state-of-the-art technology features and a re-worked auto-manual transmission distinguish this year’s MKZ from its ’09 brethren. However, the common consensus is that despite all the upgrades and refinements, the 2010 MKZ remains an also-ran when compared to the likes of the Lexus ES 350 and Infiniti G37 or even the Cadillac CTS. A distinctly average, family-sedan feeling commonly found in the less-expensive Fusion and Milan trims unfortunately permeates this allegedly upscale auto as well, thus lowering its overall ranking in the premium sedan market.

Though available only in a Base trim level, the MKZ divides this Base level into front-wheel-drive (FWD) and all-wheel-drive (AWD) sub-trims, and here lies its special appeal; most entry-level luxury midsize sedans don’t offer the security of AWD traction. This feature alone ought to ensure a second look from those in the market for a quality family sedan.

A reasonably spacious glovebox and center console, modernized dash, and brand-new center stack arrangement complements a pleasingly reworked cabin, with gobs of soft-touch surfaces and well-matched textures. As well, a Sport Appearance Package is available for 2010 that adds over-the-top exterior and interior trim upgrades, not to mention a sport-tuned suspension system and luxury cashmere seats. Topping it all off, a decent-size trunk (16.5 cubic feet) handles enough luggage for an extended stay at a world-class resort.

While Lincoln is rumored to be offering the fuel-miserly Ecoboost engine before the end of the 2010 model year, a more exciting – and doubtless more expensive – rumored upgrade is a Hybrid MKZ, also due out in the fall of this year for the 2011 model year. Time will tell if either prognostication pans out, however, as such things are subject to the whims of economic necessity. 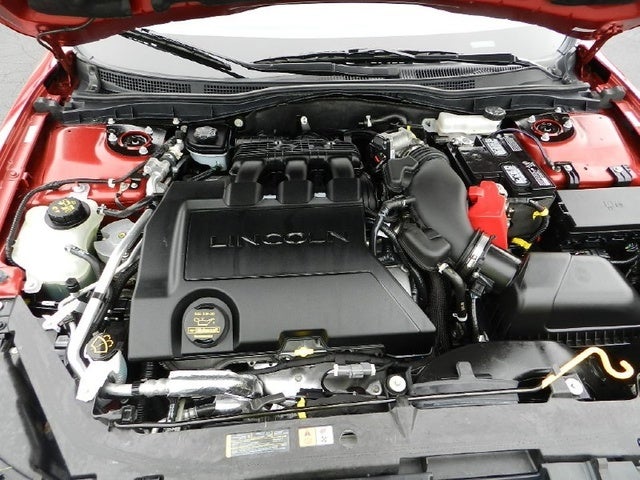 The sole drivetrain available for the 2010 MKZ is a somewhat under-achieving 3.5-liter V6 that’s managed by an upgraded six-speed auto-manual transmission to net 263 hp at 6,250 rpm and 249 lb-ft of torque at 4,500 rpm. Variable valve timing and some programming additions to the six-speed auto-manual net an estimated 18/27 mpg in the FWD trim and 17/24 with AWD. Full-time AWD traction is assured with a viscous, center-mounted limited-slip differential.

Reviewers agree that the MKZ’s V6 is powerful enough for most driving situations, though a tad raucous during acceleration. Noticeably subdued at cruising speeds, this powerplant is nevertheless noted by most reviewers as significantly less performance-oriented than many of its competitors. The increased mileage generated by the reprogrammed six-speed auto-manual transmission impresses many reviewers, and things will only get better should the scuttlebutt regarding the EcoBoost engine prove prescient.

A four-wheel independent suspension with long-and-short-arm front configuration, front and rear stabilizer bars, and multi-link rear complements 17-inch alloy wheels for a cushy, if not particularly engaging, highway cruise in the 2010 MKZ. Bumps and potholes are generally well-modulated, though the 17-inch tires can be somewhat noisy on rough surfaces. The available Sport Appearance Package additionally features a sport-tuned suspension with larger stabilizer bars that stiffen the ride appreciably, but also lead to a marginally more involved feel for the road.

Steering is described by most reviewers as fairly accurate and reasonably competent, while brakes are powerful enough and provide competent if not stimulating straight-line stops. At least one reviewer remains impressed with the AWD system in overcoming torque-steer, as well as its potential to provide sure traction in heavy weather.

Overall, the MKZ’s ride is considered by virtually all reviewers comfortable, if not plush, while handling is competent, if not particularly sporty, even with the sport-tuned suspension. This family sedan is an agreeable cruiser, but certainly nothing to write home about, excitement-wise.

Cabin ambiance and the plethora of gizmos, gadgets, and goodies give the Lincoln name a deserved reputation for keeping up with the Joneses, and the MKZ is no exception, though a few oversights interrupt this preponderance of technology. Meantime, gauges are large and easily discernable, controls are well marked, and the DVD navigation systems are reasonably well integrated into the whole via SYNC. Most interior surfaces are well padded, though some reviewers are unimpressed with a few plastic trim pieces that unconvincingly emulate the metallic look. The bottom line for virtually all reviewers is that the 2010 MKZ holds its own with most of its competitors as far as interior ambiance goes.

Those pesky front headrests, with their oddly angled positioning, continue to dog owner appreciation for the 2010 MKZ, as does the present unavailability of the highly touted and fuel-friendly EcoBoost engine. No push-button start also has a few owners grumping, while others complain about the chintzy hood prop where perfectly good struts would do quite nicely. A dearth of interior standard accents, the occasional intrusion of rattles and squeaks, and the lack of a power-adjustable steering wheel are among issues that also cause owners to grumble.

Most owners, however, laud the 2010 MKX for its over-the-top technology, plush ride, top-rated safety scores, quietness, trunk and cabin storage space, tolerable mileage, and its overall value. Special mention is made, in virtually every owner review, of the sophisticated yet easy-to-operate SYNC system that comes standard with this suave sedan, while the available THX premium sound system is generally held in high regard as well.

Luger I would have given this car a good review, but after the paint on my front bumper started peeling off and Ford/Lincoln told me "tough", I have to fail this car because of the company and their total lack of customer service. When a company won't honor its warranty and tells its customers "tough luck" when THEIR quality is to blame for paint failure, that's when the company needs to get boycotted. I was going to buy a Shelby Mustang, but now, I'll buy a Corvette instead.

Have you driven a 2010 Lincoln MKZ?
Rank This Car

My battery died (Lincoln MXZ 2010) I had it replaced. Everything is fine BUT my Bluetooth System, called SYNC, is not working AT ALL. Could this be a blown fuse?? I called a dealer who gave me a...

Just got a 2010 MKZ and the driver's seat won't heat/cool. Checking fuses looks good (and I believe both seats are covered by same fuse anyway). Any ideas what I can do to rectify this?

How Do I Reset The Time?

My touchscreen is broken. How do I reset the time?

Upgrade MKZ From Radio Only To Touch Screen

Just bought a 2010 Lincoln MKZ that came without a screen (so no backup camera). I'd like to upgrade this to a setup with the full touch screen and backup camera (hell, GPS would be great as well) ...