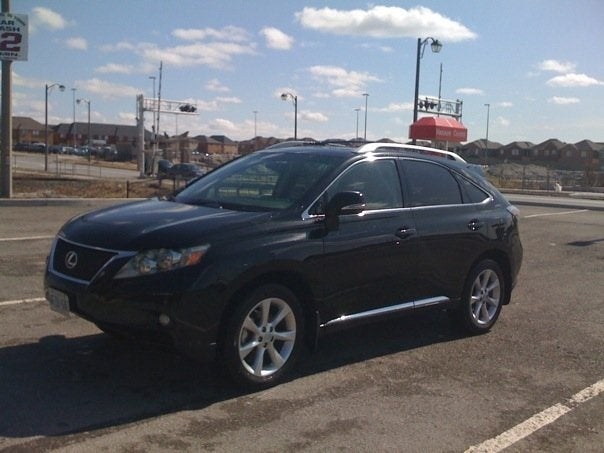 The Lexus RX 350 luxury utility vehicle receives a design refresh and interior update for 2010, resulting in a smoother, more stable ride, a more comfortable cabin, and a number of new, innovative tech features, such as the navigation system's Remote Touch controller.

A few owners prefer the previous year's RX 350 to the 2010 redesigned version, citing such issues as less comfortable seats, interior rattling noises, and problems with bumpers as reasons for their disappointment with the latest update of the RX.

Lexus gives the RX 350 an evolutionary rather than revolutionary makeover for 2010 and continues to set the standard for the compact SUV segment. Nimble, comfortable, and full of cutting-edge features, the 2010 RX 350 delivers all the components expected of an upscale hauler. Some owners find fault with certain aspects of the next-generation RX 350, and individual vehicles appear to display some build-quality problems, but overall owners can depend on the RX 350 to deliver a superb ride and a high-quality interior.

All-new for 2010, the Lexus RX 350 features a refreshed exterior design, a more powerful engine, and a number of new technologies introduced for the first time in any Lexus vehicle. Now in its third generation, the 2010 RX 350 luxury utility vehicle (as the automaker refers to it) retains its same basic exterior shape and car-like platform. Exterior updates for 2010 include an inverted trapezoid grille, angled headlights, a sharply designed shoulder line, and improved aerodynamics. The RX 350 also receives sportier 18-inch aluminum-alloy wheels for 2010.

For 2010, the RX 350 comes in a base front-wheel-drive trim and an all-wheel-drive trim equipped with Lexus's Active Torque Control AWD system, which helps improve traction and stability in all driving conditions. Both trims ride on a revamped suspension designed for improved agility and control, as well as passenger comfort. Thanks to the the redesigned suspension system, the 2010 RX 350 offers five percent more cargo space than the 2009 version. 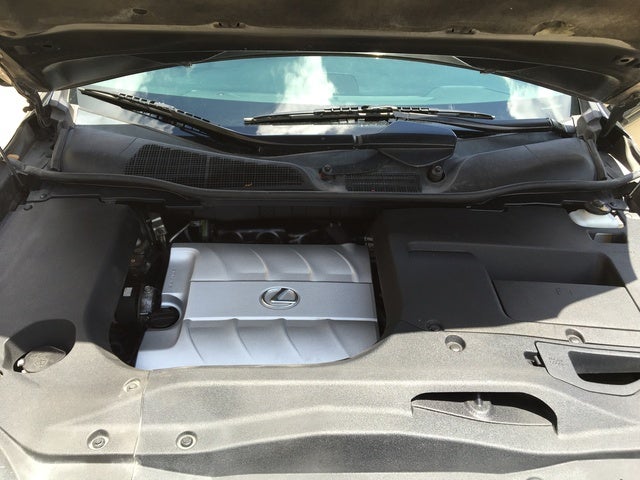 Under its hood, the 2010 RX 350 comes equipped with a revised 3.5-liter V6 engine, which produces 275 hp, an increase of 5 hp over the previous year's engine. The V6 generates 90 percent of its peak torque (257 lb-ft) at a low rpm range, resulting in good acceleration and passing performance. In addition, a dual Variable Valve Timing with intelligence (VVT-i) system fine-tunes the engine's intake and exhaust valve timing throughout the rpm range, which helps to improve fuel efficiency, lower exhaust emissions, and optimize power, according to the automaker. The V6 links to a six-speed automatic electronically controlled transmission with manual shift and snow modes.

Powered by its V6, the RX 350 jumps out from 0-60 mph in 7.4 seconds (7.5 seconds for the AWD trim), and has a top speed of 112 mpg. The EPA estimates fuel economy numbers for the base RX 350 at 18/25 mpg. Those numbers drop slightly to 18/24 mpg for the AWD trim, which features a manual-locking center differential and variable torque split between the front and rear axles. Although not a true off-roader, the RX 350 AWD can easily handle dirt and gravel roads. The AWD version has a towing capacity of 3,500 pounds when equipped with an optional Towing Prep Package. The automaker recommends premium unleaded fuel for the RX 350's powerplant.

The 2010 Lexus RX 350 rides on an updated suspension featuring a new independent double-wishbone configuration with gas-pressurized shock absorbers and a stabilizer bar in the rear. MacPherson struts remain standard in the front, although Lexus tweaked the struts for optimal performance. The upgrade improves the RX 350's already well-regarded ride and handling, enhancing its car-like agility, maneuverability, and control.

A few early reviewers would like to see sportier, more spirited handling from the RX 350, with better road feel and a more visceral overall experience. Fortunately, Lexus offers an optional sport-tuned suspension for owners who would like to toss the vehicle around a little bit. The optional suspension includes stiffer springs and shocks, which results in better feedback and reduces body sway.

Owners and reviewers are grateful for the RX 350's extra horsepower, which provides a slight but useful jolt when accelerating and passing. Supportive, well-padded seats keep passengers comfortable, while reclining and sliding rear seats, which can move forward or back to increase legroom or cargo space, make even long trips easy to endure. Cargo space grows by 5 percent, to 40 cubic feet, thanks to changes in the rear suspension. The 40/20/40-split rear seats fold flat to expand cargo space to 80.3 cubic feet. Front and rear cupholders and a sliding front center console with a storage bin are among the RX 350's interior storage spaces.

The RX 350 seats five passengers comfortably in a spacious cabin with a "dual-zone cockpit" design. New for 2010, the dual zones include an operation zone, which puts controls, such as steering-wheel-mounted buttons and the available Remote Touch navigation controller, within easy reach of the driver, and a display zone, which provides the driver with a wide range of information through such features as an available 8-inch navigation display, designed for optimal visibility. In addition, an optional Heads-Up Display, which projects information directly onto the windshield in front of the driver, uses high-intensity LEDs so the driver can easily read the display, even in direct sunlight.

Standard interior features for the 2010 RX 350 include 10-way adjustable power front seats, Espresso bird's-eye maple or brown walnut wood trim on the dash and center console, a leather-wrapped steering wheel and shift knob, dual-zone automatic climate control, cruise control, and remote keyless entry. Bluetooth and a nine-speaker audio system with a 6-CD changer, XM satellite radio, an automatic sound levelizer, and an MP3 input jack also come standard. In addition, drivers can use the Lexus Personalized Settings system to customize certain electronic functions, such as the automatic door locks, the power windows, and the illuminated entry system, as well as the optional power tilt-and-slide moonroof. The cargo area includes a new two-part tonneau cover, which conceals items when the rear hatch is closed.

Lexus offers a wide range of additional options on the RX 350, such as leather seats and a power cargo door. A dual-screen rear-seat entertainment system enables left and right rear-seat passengers to choose individual audio and video programming. Available heated and ventilated front seats include three heat levels as well as three levels of ventilation, which circulate air through the seatbacks and cushions.

The 2010 RX 350 comes equipped with a full range of airbags, including side-curtain roll-sensing and front side seat-mounted airbags, as well as a knee airbag for the driver. All seats also feature height-adjustable headrests to help prevent whiplash in the event of a sudden stop. Lexus's Safety Connect system provides such services as automatic collision notification, a stolen vehicle locator, and an emergency assist button.

Four-wheel antilock brakes with brake assist come standard. Electronic brakeforce distribution also aids drivers by modulating the amount of brake pressure delivered to the front and rear brakes. An optional Vehicle Dynamics Integrated Management system integrates the RX 350's stability control, antilock braking, and traction control systems. Other safety options include a Wide-View passenger-side monitor, which enables drivers to view the blind spot on the right side of the vehicle, and a Pre-Collision System, which uses radar technology to detect a possible frontal crash and automatically retracts the front seat belts and primes the brake assist system to optimize passenger safety. A backup camera and rain-sensing wipers are among the other options.

Many owners call the third-generation, 2010 RX 350 the best RX yet and consider it a big improvement over the previous year's version. The 2010 RX 350 delivers a ride so smooth the vehicle seems glide over the road, impressing owners. The revamped suspension results in less body roll and a flatter ride through corners, owners say. Braking remains good, ensuring confidence during emergency situations. The RX 350's exterior restyling particularly appeals to owners, who also like the cabin's fit and finish. However, the RX 350 receives mixed comments about interior quietness and road noise, with some owners satisfied with the quiet cabin and others noting an annoying intrusion of exterior noise. Similarly, some like the RX 350's revamped seats, while others find them too firm. A number of owners have also complained about such build-quality issues as interior rattling noises and problems with bumpers.

rdlex10 Any trouble with shocks reported.? Ours is quite choppy. Rod.

Guru62CPN The head rest sucks, there was nothing wrong with the much more comfortable older style. I'm 66 years old, and things are suppose to get better not worse.

Users ranked 2010 Lexus RX 350 against other cars which they drove/owned. Each ranking was based on 9 categories. Here is the summary of top rankings.

What Is Happening To Have The "Check AWD System" Message On Along With The ...

My Remote Has Stopped Working

Had to place the remote against the start button after leaving the car this morning. When I got to work, the remote would not lock the doors

My 2010 Lexus rx350 caught on fire last Monday. It was caused by the heating element in the driver seat, which was burned beyond repair. The fire caused extensive smoke damage throughout the enti...

When Should I Change Plugs And Hoses