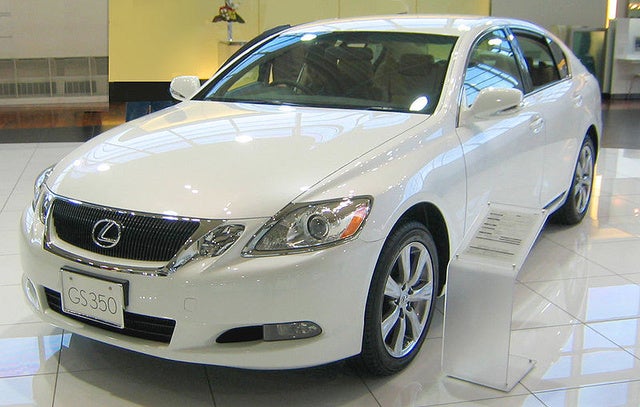 For 2010 the Lexus GS 350 continues to offer buyers a luxurious driving experience dripping with refinement. This four-door sedan sees only minor detail and trim changes for 2010; standard Bluetooth and satellite radio up its technology quotient, while active front headrests round out the GS 350’s impressive range of safety equipment. The 2010 GS 350 is available with rear-wheel drive (RWD) or all-wheel drive (AWD); both trims share the same V6 engine and automatic transmission.

Last redesigned in 2006 the GS 350 still has a fresh look, with understated styling that is decidedly up-market while at the same time devoid of excess flourish. The midsize GS 350 manages to remain relatively compact while offering plenty of interior space and a commodious trunk. Seating for five passengers is provided via bucket seats up front and a comfortable rear bench. Legroom is excellent, especially up front, where the power seats provide a wide range of adjustment. The rear seats are spacious for two, but the car's relatively narrow platform means hiproom is tight with three aboard.

The interior of the GS 350 features top-notch fit and finish and the incredible attention to detail that Lexus is known for. An example is the placement of seldom-used secondary controls (mirror adjustment, traction controls, etc.) behind a hinged panel left of the steering wheel, keeping the dash uncluttered while remaining ergonomically friendly. The rest of the controls are for the most part logically laid out, though the center stack can be a bit overbearing in its reliance on touch-screen functionality. Standard perforated leather seats feature the signature buttery texture common to Lexus models, and the dash is rendered in expensive, soft-touch plastics that are complemented by glossy bird's-eye-maple wood trim. In the Lexus tradition the cabin is eerily quiet, and virtually no vibration or harshness is felt by occupants.

Lexus would like you to believe the GS 350 is a sport sedan capable of taking on the most athletic entries from BMW and Audi. Unfortunately, its softly sprung suspension and lack of a manual transmission relegate the GS 350 to the role of sumptuous luxury sedan, one it performs admirably. Its 3.5-liter V6 engine features intelligent variable valve timing and makes 303 hp and 274 lb-ft of torque. Typical of Lexus powerplants the GS 350’s engine is uncommonly smooth and refined. Acceleration is brisk, and the V6 has plenty of reserve power for passing on the highway. The six-speed automatic transmission is a willing partner, performing timely downshifts when needed and delivering crisp, smooth shifts. Yet the drivetrain lacks the enthusiastic verve of, say, a BMW inline six, and the lack of a manual gearbox hints at the GS 350’s true calling as a highway cruiser.

The 2010 GS 350 features a four-wheel independent suspension with double wishbones up front and a multi-link setup in the rear. Despite relaxed chassis tuning this sophisticated configuration means the GS 350 still handles with more aplomb than most Lexus offerings. While the dominant trait (especially in heavier AWD trims) is moderate under-steer, the GS 350 has plenty of grip and breaks away smoothly at the limit. The electric power steering is a bit light and imprecise, but turn-in is crisp, and even in tight cornering the GS 350 does what it’s told. Yet it never comes alive in your hands the way a BMW or Audi sedan does, preferring to plod along quietly while others have all the fun.

A full range of electronic suspension aids, including available variable suspension damping, keep the GS 350 on an even keel, but also limit the level of driver involvement. Braking on the 2010 GS 350 is by vented discs at all four wheels. Powerful brakes rein in the GS 350 with confidence, though pedal feel is slightly spongy. Standard 17-inch alloy wheels (18-inchers are optional) contribute to the car's comfortable, smooth ride. The optional electronic AWD system operates transparently and will be a real boon to customers who live in the snow belt.

For 2010 the GS 350 is available in two trims (RWD and AWD) and comes with a generous level of standard equipment. All GSs get power leather heated seats, a power tilt and telescoping steering wheel, dual-zone automatic climate control, and a power moonroof. The standard SmartAccess keyless entry and start system will be appreciated by most, though some find it superfluous. Two Luxury Value packages upgrade the level of interior equipment. The first includes Lexus’ excellent GPS navigation system, upgraded for 2010 with real-time traffic and weather information, along with rain-sensing wipers, ventilated seats, and parking assist. The second option package mirrors the first, but upgrades the stereo with speakers and amplifiers by Mark Levinson, providing nearly concert-quality sound from its 14 speakers.

Safety equipment for the 2010 GS 350 is extensive. Standard front, side, and curtain airbags are complemented by a knee-blocking airbag under the dash that reduces the potential for leg injuries. Xenon headlights (with an optional cornering feature) and LED taillights ensure the GS 350 is visible from any angle, while its standard ABS brakes with pedal assist and brakeforce distribution provide maximum collision-avoidance ability. While not recently tested by the federal government, the GS 350 has scored very well in Insurance Institute crash-testing, earning the highest rating of Good in all categories.

Despite its lack of athleticism, the 2010 Lexus GS 350 is a compelling alternative to established German competitors. The level of refinement Lexus is able to deliver is nothing short of amazing, and piloting the GS is a sublime, genteel experience. While the Lexus nameplate may still not have quite the cachet of the spinning propeller or three-pointed star, the GS 350 will appeal to value-minded buyers who have grown weary of the obscenely expensive German offerings of late (a Mercedes E-Class is approximately $5,000 more than a comparable GS). Its sedate driving experience won’t please gearheads seeking a sports car in sedan clothing, but should find wide acceptance among buyers who place a premium on comfort and sophistication.

EXPERIAN FOUND THE ACCIDENTS ON MY VEHICLE WERE IN ERROR. HOW DO I OR YOU REMOVE THEM