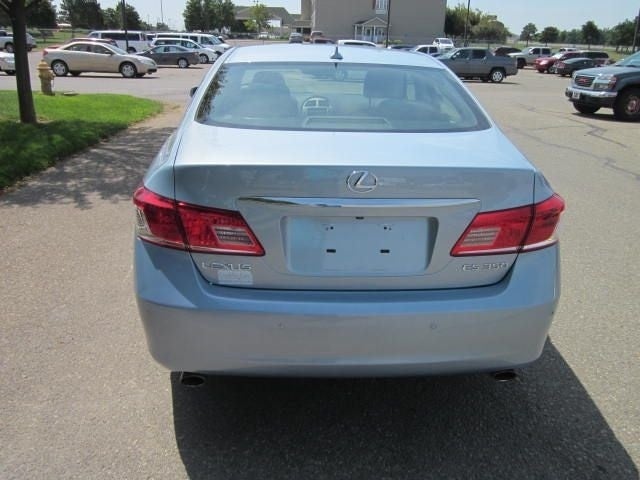 The value-laden 2010 Lexus ES 350 pampers its occupants with a quiet, comfortable ride and a swanky leather interior.

Aggressive drivers will find that the 2010 ES 350’s handling lacks athleticism, with excess body roll and too much road isolation. 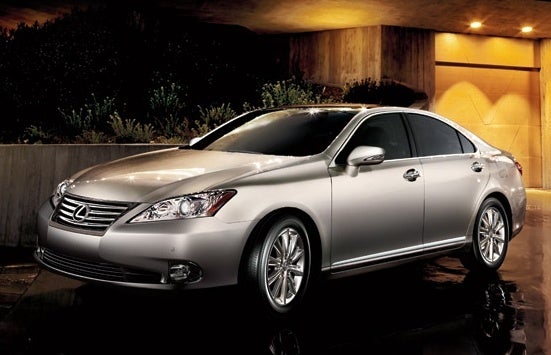 For 2010 Lexus’ evergreen ES 350 sedan remains a compelling choice among entry-level luxury cars, offering buyers serene comfort and coddling luxury at a reasonable price. While its somewhat plodding driving dynamics are unlikely to impress German sedan drivers, the ES 350 possesses an exceptionally smooth ride and the sort of luxurious cabin detailing that has become a Lexus hallmark. The ES 350 is a great value, provided buyers are satisfied by the impressive level of standard equipment and able to resist Lexus’ tempting (but quite expensive) option packages.

The popular Lexus ES 350 benefits from a series of subtle enhancements for 2010, including new fascias, several attractive new colors, and an upgraded optional navigation system. While the midsize sedan shares its platform with the mainstream Toyota Camry, Lexus has gone to extraordinary lengths to distinguish the ES 350 as an entirely different automobile. Styling tweaks for 2010 include a newly chiseled nose treatment and re-worked taillights. The design is classy and sleek, if not exceptionally adventurous, and features tasteful chrome accents. Dimensionally the 2010 ES 350 lies near the larger end of the midsize segment; its large trunk and ample cabin space make it a great choice for long trips.

Though parent company Toyota’s once sterling reputation for quality has taken some hits lately, the 2010 Lexus ES 350 still shines as a superbly well-made product; the paint gleams perfectly, and the interior appears custom-fitted. Under the skin the chassis features high-strength steel for rigidity and responds confidently to road imperfections large and small. In typical Lexus fashion the cabin is quiet and vibrations are very well isolated.

While not possessing the Euro-firm driving dynamics of competitors from BMW, Mercedes, and Audi, the 2010 ES 350 does meet most drivers' performance needs, while costing far less and offering much more standard equipment. The Lexus’ $35,000 base price includes 10-way power leather seats, a power sunroof, SmartAccess keyless start, and a premium 8-speaker, 6-CD stereo with Aux input; all those items would cost extra at a Bimmer or Benz dealership. In the cutthroat entry-luxury market, the ES 350 also competes with freshly designed offerings from Cadillac, whose acclaimed CTS offers optional AWD, and even Hyundai, whose large Genesis sedan has Lexus squarely in its sights and wears an impressively low sticker price. Yet neither of these competitors can match the prestige of the Lexus nameplate, nor the polished manners and seamless quality of the 2010 ES 350.

For 2010 Lexus offers the ES 350 with one engine, a 3.5-liter DOHC V6. Serving up 272 hp and 254 lb-ft of torque, this all-aluminum mill features 24 valves with variable intake and exhaust timing. Smooth and responsive, the V6 hauls the ES 350 from 0-60-mph in less than 7 seconds, evincing only minor torque steer, but occasionally emitting an unwelcome, Camry-esque drone.

All 2010 ES 350s drive the front wheels via a six-speed automatic transmission. Shifts are crisp and smooth, but sometimes the gearbox seems distracted, hunting excessively between the six ratios. Fuel economy is very good for the class, 19 mpg in the city and 27 mpg on the highway, courtesy of the efficient powertrain and aerodynamic profile.

The ES 350 rides on a four-wheel independent suspension comprised of a MacPhearson strut front and rear, with coil springs and 17-inch wheels. The ride is excellent; both around town and on the highway the ES 350 floats over potholes and expansion joints with cloud-like smoothness. Depending on your priorities the ES 350’s cornering ability will either seem just right or woefully inadequate. For jaunts to the store and up the interstate, the ES 350 feels competent and buttery smooth. The speed-sensitive power steering is effortless at parking-lot velocities. Yet the wheel doesn’t firm up enough as speeds rise, and road feel is lacking. Push the Lexus on a twisty road, and the body heels over like a sailboat rounding a buoy. The numb, over-boosted wheel doesn’t need wood trim to evoke a boat’s helm as it struggles vainly to keep the wallowing in check before allowing the front end to wash out in moderate, if predictable, understeer.

Disc brakes at all four wheels haul the ES 350 down from 60 mph in an acceptable 133 feet. Pedal feel could be firmer, but standard ABS and brake assist, along with electronic brakeforce distribution, contribute to the ES 350’s solid feel in panic stops.

Finished in supple padded leather, the 2010 ES 350’s cabin is a nice place to pass the miles. Room for five passengers is generous, with plenty of legroom front and rear and efficient use of storage spaces. Front seats with 10-way power and memory are comfortable and feature standard heating, though lateral support is lacking. The polished wood-veneer dash (either walnut or birds-eye maple) lends an especially rich look, and the electroluminescent instrument cluster impresses with its crisp, easy-to-read dials.

Ergonomics are good, with logically placed controls that are intuitive to operate. The power tilt/telescoping steering wheel features controls for the audio system, an 8-speaker unit with 6-CD in-dash changer and Bluetooth phone connectivity. Two option packages are available, and while expensive, they significantly upgrade the ES 350’s luxury quotient. An HID headlight value package includes Xenon bulbs that swivel to better illuminate corners along with ventilated front seats, wood/leather steering wheel, and a full-size spare tire. The HDD Navigation package adds Lexus’ top-notch GPS system, which is hard-drive based for faster operation, along with a rear-view camera and voice recognition.

The 2010 ES 350 has standard front, side, and curtain airbags along with under-dash knee airbags that inflate to protect front-seat occupants' legs. Standard traction and stability control provide a measure of security on slick roads, while a new Lexus Safety Connect feature provides automatic crash response. In federal testing the 2010 ES 350 earned five stars for frontal impact protection. The Insurance Institute for Highway Safety rated the ES 350 as Good, placing it in the safest category of vehicles tested.

Nearly all ES 350 owners are wowed by the sedan’s polished road manners; its comfortable ride is especially appreciated. The smooth, powerful engine impresses ES 350 buyers, as does Lexus’ highly professional dealer network. Complaints center on mushy handling, with several owners noting that the ES 350 is not a sports sedan by any means.

Jerrylondon What's a god price with 20000k and navigation

michelew This is my second Lexus. I previiusly owned a 2002 ES300. My 2010 ES 350 is a good ride having similar luxury elements as before. My two most negative compliants are too much road noice in the cabin and the front bumper sits to low, developing scratches from the parking cement dividers. Otherwise a great automobile.

Users ranked 2010 Lexus ES 350 against other cars which they drove/owned. Each ranking was based on 9 categories. Here is the summary of top rankings.

Door Will Not Lock From Door Handle Nor For The Fob.

Door will not lock from door handle nor for the fob. Sometimes door, only on driver side, will not open when using the fob and/or door handle.

Push Button Starter On Lexus Not Doing Nothing

push the button....nothing...battery is working, electrical in car starts up, radio works, but the push button does nothing???

I have a 2010 ES350 and when I come to a stop, it idles very rough. Dealership states that it is functioning properly. It is driving me crazy. I have tried different types of gas stations but put...

front window is out of track...how to fix it