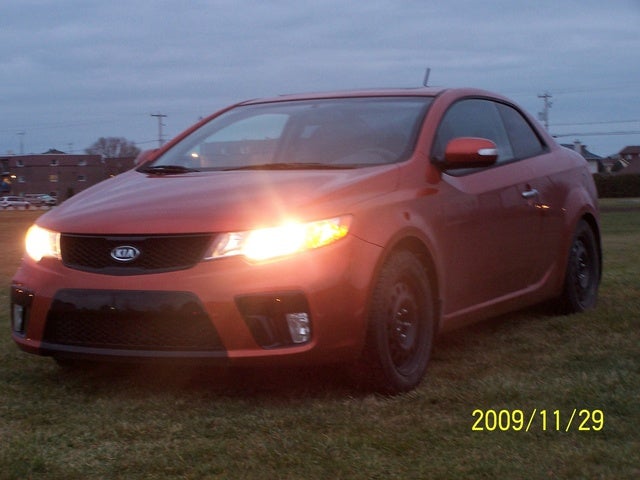 Kia rolls out its first two-door coupe, the appropriately named Forte Koup, for 2010. Designed to compete with such vehicles as the Honda Civic Coupe and the Scion tC coupe, the Forte Koup borrows its underpinnings from the Forte sedan but sits lower than the sedan, and measures slightly shorter, for a sportier overall feel. In addition, it displays a distinctive exterior design, with a bold grille, aggressive air intakes, swept-back wrap-around headlights, a rear diffuser, and dual exhaust pipes. The Forte Koup also rides on a sportier suspension, which delivers good handling and a smooth, stable ride, according to reviewers.

The front-wheel-drive Forte Koup comes in EX and SX trims for 2010, powered by two different engines. A 2.0-liter four-cylinder producing 156 hp and 144 lb-ft of torque drives the EX trim, while the SX receives a larger 2.4-liter four-cylinder, which generates 173 hp and 168 lb-ft of torque. In the EX, the engine links to a five-speed manual transmission, which comes standard, or an optional four-speed Sportmatic automatic. The SX comes equipped with a six-speed manual shifter. Both engines provide decent performance, although some reviewers find fault with the engines' throttle response, which affects smooth driving at lower speeds.

Inside, the Forte Koup comes well-equipped for a compact coupe. Standard features for both trims include air conditioning, cruise control, Bluetooth, remote keyless entry, and a six-speaker AM/FM audio system with a CD player and Sirius satellite radio. The driver's seat features six-way adjustment, including height. The SX adds such features as sportier cloth upholstery with red stitching, a leather-wrapped steering wheel, metal pedals, a trip computer, and a tilt/telescoping steering wheel. Power windows and door locks come standard on both trims.

Forte Koup trims equipped with the automatic transmission include an EcoMinder fuel-efficiency monitor, which guides drivers in achieving better fuel economy. Storage spaces in both trims include a center console with cubbies for small items. An optional Leather Package adds a more upscale feel, with such features as leather upholstery and heated front seats.

The Forte Koup comes with a full range of airbags, including dual front, front seat-mounted, and full-length side-curtain airbags. Electronic stability control and antilock brakes with brake assist and electronic brakeforce distribution also come standard on both trims. The EX rides on 16-inch alloy wheels, while the SX upgrades to 17-inch alloy wheels.

Users ranked 2010 Kia Forte Koup against other cars which they drove/owned. Each ranking was based on 9 categories. Here is the summary of top rankings.

Have you driven a 2010 Kia Forte Koup?
Rank This Car

I Slammed Into A Huge Rock Trying To Avoid Hitting A Car, Severely Damaging...

I connected my iphone 7 to my kia forte Koup 2010 with Bluetooth but when i play a song it doesnt playing on the car's speakers only on phone Anyone have this problem ?

ok we have a 2.0 kia forte koup and we want to know if the exhaust manifolds are different between the 2.0 and the 2.4... reason for the question is because they have a few turbo kits for the 2.4 but ...