The 2010 Jeep Compass offers smart styling and a comfortable ride with a responsive chassis.

The engines offered with the 2010 Jeep Compass offer neither power nor impressive efficiency, effectively presenting the worst of all worlds.

It’s not that the 2010 Jeep Compass is a worthless vehicle, it’s just redundant. With so little to differentiate it from the Patriot or the Caliber, the Compass’ inadequacies – inefficient, underpowered engines and a middle-of-the-road approach – are only magnified. There are certainly better midsize crossover options out there.

Never mind that it’s built on the same platform as the Jeep Patriot and uses the same engines besides – the Jeep Compass is a totally unique vehicle. Whereas the Patriot is marketed more as a compact SUV, Jeep wants consumers to consider the Compass a compact crossover, even though both are built on the same platform from which the Dodge Caliber is derived. It’s a stunning example of market differentiation, where the only real difference is a lack of off-road credentials.

This four-door hatchback has the option of two engines and front- or all-wheel drive (AWD), with a 2,000-pound maximum towing capacity. While a five-speed manual transmission is the standard offering, a continuously variable transmission (CVT) is also available, and the Limited trim includes an AutoStick with its CVT that allows the driver to shift on command as well. 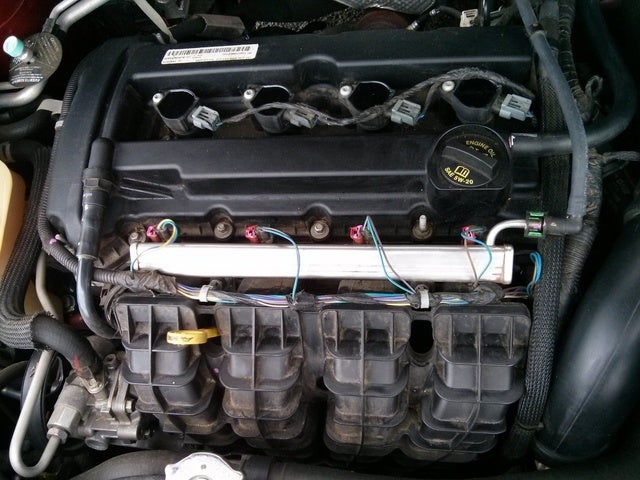 A 172-hp, 2.4-liter inline four-cylinder engine (I4) is standard on all trims, although a 158-hp, 2.0-liter I4 is another option for Sport trims equipped with front-wheel drive (FWD). Both engines provide adequate power around town and from a stop, but begin to struggle under load, with a full-capacity trip seriously straining their ability to cope. The transmissions do little to combat this situation, with the CVT providing a particular reluctance to downshift or even upshift at times. Sadly, the manual transmission fares little better, with a crunchy clutch and sloppy shifter action that fails to bring along increased speed or even much efficiency. Still, when equipped with FWD and the five-speed, the Compass can manage 23/28 mpg as opposed to the CVT’s 21/25. Adding the Freedom Drive I AWD system will bring a penalty, slowing the five-speed and CVT down to 22/27 and 21/24 in that configuration.

The 2.0-liter engine fails to do much better, despite its lack of AWD or extra power, showing 23/29 and 23/27 for the five-speed and CVT. Both engines are coarse, underpowered, and unrefined, producing a harsh scream under load that only quiets at cruising speeds, but never to a pleasant level.

As the Compass is essentially a car, there’s little to preclude it from having a pleasant and comfortable ride. McPherson front struts and a multi-link rear suspension on the Daimler-Chrysler/Mitsubishi GS platform provide car-like handling and maneuverability, with the higher profile of the Compass producing only minimal roll and lean. Absorbing most road inconsistencies with little drama, some larger bumps will produce body jiggle, and an unexpectedly large turning radius frustrates parking and city maneuvering. Standard traction control helps even non-AWD trims, although AWD does help in climates where inclement weather can be an issue. 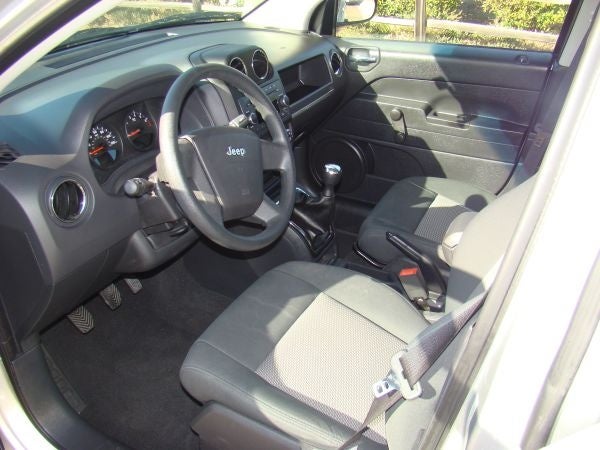 The Compass was created to fit a very specific niche within an already crowded model lineup for Jeep, and has succeeded. The drawback for this success shows up most vividly in the cabin of the Compass, which fails to distinguish itself in any way from either its competitors or its stablemates. With the exception of a slight difficulty reaching climate controls when the manual transmission accesses forward-facing gears, there’s very little to complain about. Gauges and controls are well-placed and easy to read, the materials aren’t cheap or flashy, and final assembly seems to have been done with an appropriate amount of care. While seats are comfortable and supportive up front, rear seats lack comfort for longer trips, although room is more than adequate for all but the tallest drivers. Vision is obscured for some, hampered by large A and D pillars, as well as tall rear headrests. Road and engine noise can get annoying and even distracting, permeating increasingly into the cabin as speed rises.

Frontal impact tests involving both driver and passenger in the 2010 Jeep Compass resulted in four-star scores by the NHTSA, and rollover tests were awarded the same score. These scores come despite standard dual front and curtain-side airbags, antilock brakes with brake assist, an anti-skid system, front-seat active head restraints, and a tire pressure monitor. Side impact test results on the other hand were all rated with five stars.

Styling has won over many Compass owners, not to mention a smooth ride that many have been unable to distinguish from that of the cars they also own. While there is little to complain about with the interior of the Compass, very few have gone so far as to offer it any praise, either. Finally, a selection of weak and unrefined engines seriously hurt what could be an otherwise solid offering.

Natureboarder i have a 2010 jeep compass. my family has been into jeeps since i was born (im 28 now). in the past 4 years that i have owned the car i have put over 100,000 miles on it and have drivin out to CO for snowboarding trips twice. it works amazingly well in the snow (if you turn off the select track and have the 4wd on). however the crank arms have had to be replaced EVERY YEAR. and i just replaced the transmission. i take it easy on my car and i love jeep but they have gone way down hill since 2000. i hate to give it up especially with the fuel economy, it's amazing for a jeep. but most of my family is moving away from the jeeps. as am i.

Users ranked 2010 Jeep Compass against other cars which they drove/owned. Each ranking was based on 9 categories. Here is the summary of top rankings.

Have you driven a 2010 Jeep Compass?
Rank This Car

I Have A 2010 Jeep Compass. It Wont Start, Theres Power To Everything And T...

Can I Use Jeep Liberty Parts On A Jeep Compass

2010 Jeep Compass No crank . The windows , radio. signal lights, will not work . Turn key want turn over . New battery and check all the fuses and relays are fine . What would be the fix or check fo...

I have a 2010 jeep compass Park it and went to get in it turn the key wont crank . Got to checking the fuse all are GOOD checke the relays and they all are GOOD and then got to notice that the windo...