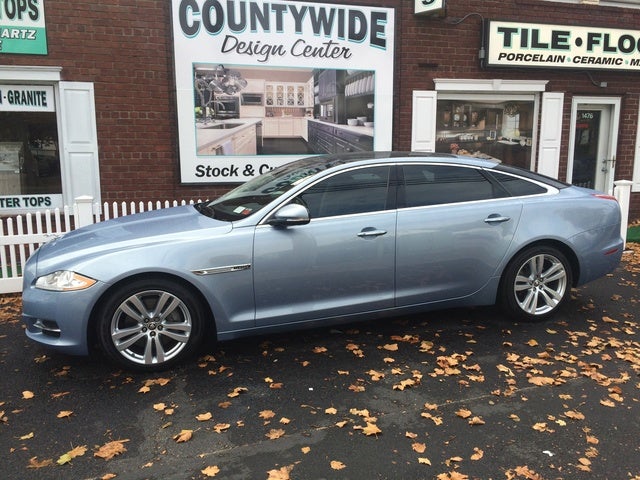 Jaguar is taking some risks since being sold by Ford to the Indian outfit Tata. For 2010, the XJ sees a massive overhaul, with new styling inside and out, more power, and some extra features to help entice a whole new audience. The XJ comes in a regular and extended-wheelbase configuration, designated L, across three trims - Base, Supercharged, and the special-order-only SuperSport. Each trim gets a different engine, all mated to the same six-speed shiftable automatic transmission, pushing power to the rear wheels.

The all-aluminum XJ is a four-door sedan with new rear window styling that makes it look almost like a sport coupe. Swooping, more aggressive design leads the Jaguar away from the styling cues that had so many mistaking Buicks and Hyundais for their beloved big cats. The front fascia now sports a trapezoidal grille that’s a far cry from its predecessor, while the tail section, with its upright LED lamps, is again a strong departure from traditional Jaguar styling. A more simplistic approach has been taken with the sides, where there is a distinct lack of lines and creases, a brave approach in an industry that is reluctant to leave well enough alone. The fenders however, do swell above the wheels and flow directly into the head and tail lamps, an elegant blending of the entire approach.

Inside, a unique wrap-around dash is accented with plenty of leather and laser-etched wood trim, as well as a full leather headliner. Most of the knobs have been absorbed by a high-definition, LCD touchscreen that nicely takes care of many functions. Look for a panoramic sunroof to really expose all these new elements, including the optional 1,200-watt Bowers & Wilkins stereo that has been getting a lot of press. The 18.4-cubic-foot trunk is class-leading, according to Jaguar, and special care has been made to use thicker glass and body panels for more sound insulation - a confusing addition, considering the air intake in the 5.0-liter engine has been tuned for increased tone.

Base XJ and XJL trims come with a 385-hp, naturally aspirated version of the 5.0-liter V8 that Jaguar claims will motivate the 3,800-pound vehicle to 60 mph in 5.4 seconds. Supercharged trims get an 85-hp boost in the form of forced induction that will shave a half-second off that figure, and for those who aren’t scared by a price tag well over a hundred grand, the SuperSport manages it in 4.7 seconds, thanks to 510 hp.

JaguarDrive Control is on tap to modulate suspension, throttle, steering, and transmission between Normal, Dynamic, and Winter settings, as well as an electronically controlled rear differential, not to mention traction and stability control, although the latter is relaxed when in Dynamic mode. Six airbags protect occupants if all other safety features fail, and the XJ is expected to get the usual high marks in crash tests.

The big question is, of course, “Will it sell?” So far, the car has been well received, from concept to coronation. That said, owners have expressed concern at a car originally lauded for its low-weight construction that has blown well past 4,000 pounds in its SuperSport configuration. Regardless, it looks like the risks Jaguar has taken should translate into rewards, if only it can find a niche it finds comfortable.

Bobby The Xj is hands down the most beautiful thing I have ever layed my eyes on except a 74 , but in like 10-15 year's when the price is affordable I will be a New Mexico Jaguar owner. First I need to buy some new shoes because mines are 2 sizes too big and used. *****

Have you driven a 2010 Jaguar XJ-Series?
Rank This Car

How Do I Add Pictures ?

How do I add pictures.