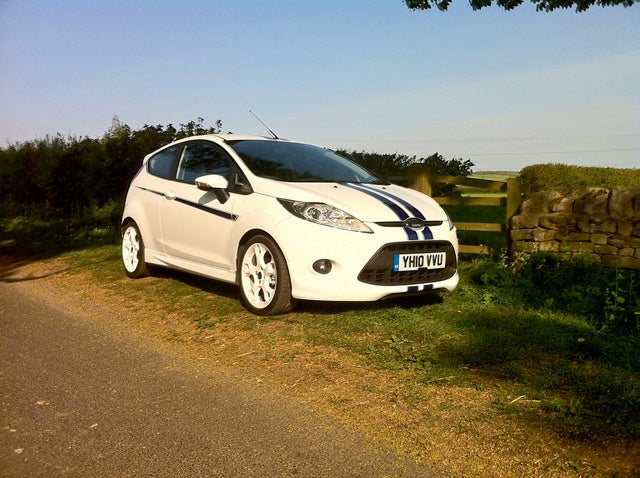 The all-new Ford Fiesta makes its U.S. debut in mid-2010 as a 2011 model, and continues the legacy of the original fuel-efficient, front-wheel-drive subcompact car, which first appeared on highways in 1976. Although the Fiesta has not been available in the U.S. for three decades, it has continued to sell well worldwide, particularly in Europe and the United Kingdom. The latest-generation Fiesta has been available in Europe since 2008, and has proved a popular seller, thanks to its stylish looks, comfortable interior, and excellent fuel efficiency, with mileage numbers up to 40 mpg.

In bringing the car stateside, Ford made only a few tweaks to the European version. The U.S. Fiesta has a slightly longer front end, necessary to meet federal U.S. safety regulations, and features a different headlight design. It also weighs more than its European cousin, and comes equipped with a revamped interior. Finally, Ford offers the Fiesta in both a sedan and hatchback, as opposed to Europe's hatchback-only configuration.

Outside, the Fiesta displays an aerodynamic bullet shape, with a dramatic sloping roofline, stretched-out headlights, trapezoidal three-bar chrome grille, prominent wheel arches, and rounded rear window. Although the Fiesta stands rather tall for a subcompact, Ford has managed to make the car look low and sleek.

Ford offers the new Fiesta in five trims, including the S Sedan, SE Sedan, SE Hatch, SEL Sedan, and SES Hatch. A 1.6-liter Duratec four-cylinder engine with twin-independent variable cam timing drives all Fiesta trims. The engine produces 120 hp, and mates to either a five-speed manual transmission, which comes standard, or an optional PowerShift six-speed automatic designed for quick shifts, which helps improve fuel efficiency while ensuring fast-paced acceleration. The maintenance-free transmission has no dipstick, and comes equipped with enough transmission fluid to last the life of the vehicle.

The new Fiesta rides on the same small-car platform introduced recently for the MAZDA2 and planned primarily for use in the European and Japanese markets. The Fiesta's platform and structure emphasize light weight and strength, with an eye toward safety in crashes as well as fuel economy and sporty handling.

The interior highlight, according to Ford, is the Fiesta's re-envisioned center stack, which the automaker says was inspired by a mobile phone. The futuristic design separates the three key elements of the audio system, including the control buttons, display, and underlying electronics, to create a more functional and visual-appealing arrangement.

Helping to ensure the safety of occupants are such features as a knee airbag, as well as six other standard airbags, all part of the vehicle's Intelligent Protection System. Ford's AdvanceTrac electronic stability control system also comes standard.

The Fiesta gets good marks from drivers and reviewers for its nimble handling, peppy powerplant, and long list of standard and available features. The Fiesta handles well in corners and delivers a sporty driving experience. Owners and reviewers also like its smooth ride and responsive steering. Adults can ride comfortably in both the front and rear seats, which provide plenty of legroom and headroom, unique in a subcompact. Cargo space checks in at 12.8 cubic feet, so owners can also haul around a fair amount of luggage or groceries.

Have you driven a 2010 Ford Fiesta?
Rank This Car

My tail lights are not working...brake, indicators and reverse lights are ok would the light have a seperate fuse if so where is it?

I have had my cars head gasket fixed and a new expansion tank. I have no leaks and coolant is full but my car still over heats. This happens at slow speeds but at high speed the car is fine Cou...

Where Is The Starter

Inform You Ive Got My New Car

Hi just to say thanks! Got my Car Guru advertised car today. From Woodson Cars , fiesta red E010BZR . Am I right in thinking I am eligable for a lift??

Hi, I'm the owner of a 2010 Ford Fiesta, 1.4 L petrol engine. The problem I'm facing with it is the oil leak around spark plugs especially those two on the left side (drivers side). I have changed...

154 views with 1 answer (last answer about a year ago)