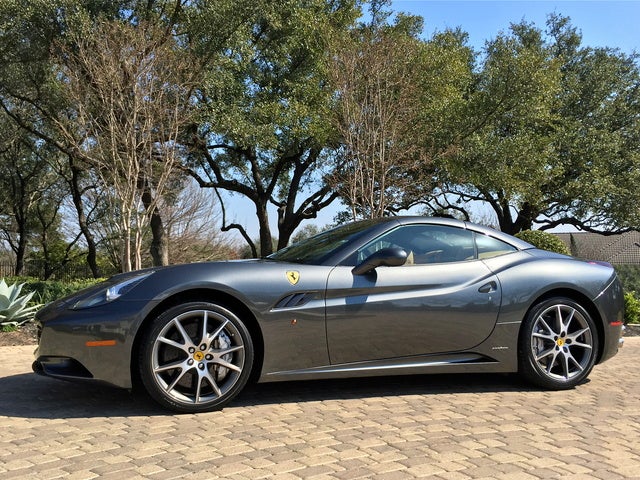 I don’t understand the California. Financially at least, I understand what Ferrari was trying to achieve. It needs to boost sales, so it's aiming for a new demographic. In this case: women.

But this is where it loses me and logic seems to have left Maranello. Apparently women are less forgiving of a pure sports car, so Ferrari fitted the California with a useable trunk or its version of one. But they’ve also decided the California should be a convertible with a retractable hard top, a decision that costs the platform 3.5 of its already scant 12 cubic feet of trunk space.

Then they decided to make the California a 2+2 arrangement. Again, this I understand. 4-passenger cars sell better than 2-passenger cars, regardless of history and tradition and purpose. But why bother including 2 extra seats when they’re unusable as anything other than for a child seat or as a small storage shelf? In fact, most customers opt to exchange the rear seats for a “rear parcel shelf,” a free – and much better – option anyway, and children small enough for car seats soon grow out of them. If carrying children is a selling point, Ferrari will lose its customers as soon as little legs grow. So what’s the point?

I have no doubt Ferrari can build a car that can comfortably carry 4 passengers, but this I don’t understand, especially when the California manages to do so many other things so well. Yes, the top-down profile seems to mimic a knocked-over bowling pin, but the front looks tight and tidy, and the overall shape sports a 0.32 drag coefficient, making it the slipperiest production Ferrari ever. Yes, there’s never been a front-engine V8 Ferrari before, but there is nothing to complain about here. This is no American V8, slow to rev and sounding like a boat at idle. This has a flatplane crankshaft, just like you expect in a Ferrari, and the engine barks and leaps up and down the rev range. 460 hp and 485 lb-ft of torque certainly sound in Ferrari's range, too. Besides, it’s fast enough to hit 60 in the same time as an F430 – under 4 seconds.

The 7-speed dual-clutch transmission is claimed to change gears faster than the F430 Scuderia, too, so you’d have to be a very meticulous picker of nits to find issue there. Okay, the throttle doesn’t blip at all during gear changes, and that’s a cool feature that other systems do have. But really, it’s just trying to make what is essentially an automatic transmission seem more like a manual. If I really want that – and I do - I’ll just have an actual three-pedal manual, please and thank you.

Ferrari fanatics complain that it’s softer than its stablemates, easier to drive. But it’s still one of the best-handling cars out there, and only a few Ferraris can outdo it.

There’s so much right with the California, but way too much wrong. The rear end really is obese and ugly. Ferrari promised a traditional 6-speed manual as an option, but it’s been mysteriously absent so far. Perhaps worst of all is the Chrysler-sourced touchscreen navigation and entertainment system. Paying Ferrari dollars and getting Chrysler tech is known to cause nausea in consumers, and this is simply the wrong way to attract new buyers.

And yet the California has been sold out since its introduction, increasing Ferrari’s overall production by 50%, so people must like it. It’s certainly done its job of attracting new blood to the Ferrari brand, with 60% of buyers being first-time Ferrari owners. Maybe Ferrari’s been doing things wrong all these years, despite what the fanatics say. The one thing that is truly Ferrari is its racing pedigree, and Ferrari likes to win. It set itself a goal with the California, and no one can argue the company hasn’t reached it. Does that make the California a real Ferrari? I don’t care, it’s still ugly.

What's your take on the 2010 Ferrari California?

Have you driven a 2010 Ferrari California?
Rank This Car

I immediately put the picture in my car window with the door open yet it has still not been approved for over a week! I have open questions with a buyer and I am going to lost almost $100,000 deal...