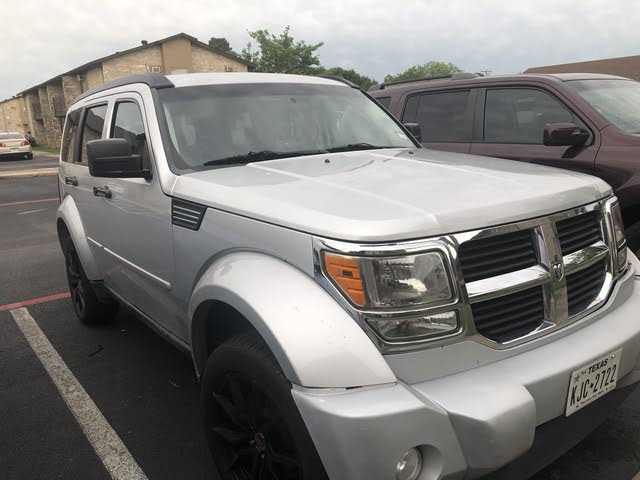 Lots of towing capacity, plenty of cargo space, some innovative cabin comforts, and a manly appearance all come with the 2010 Dodge Nitro.

Lackluster acceleration from both its standard and available V6 engines as well as poor gas mileage and substandard cabin materials keep the 2010 Nitro way in back of the frontrunners in its segment.

Despite its brutish appearance and its legendary towing capacity, the 2010 Dodge Nitro is limited in simple drivability. Too many questionable traits make the Nitro a feasible Sport Ute only for those who place perceived value above versatility, loyalty above utility, and looks above performance.

Love it or hate it, the 2010 Dodge Nitro does have a certain presence out on the road. Design-wise, the Nitro seems to be heavily influenced by the Jeep Liberty, which, in turn, has a slight resemblance to the mid-'70s Land Rover. In any case, the 2010 Nitro is a midsize five-door SUV capable of seating up to five passengers in front bucket and rear bench seating. Available in two trim levels, the base SE and the top-end SXT, the Nitro is a truck-based, trailer-hauling machine that is neither particularly fast, nor especially well-mannered. It is, however, generously endowed with interior cargo space at 76 cubic feet with the rear seats folded down. Both trims are available in either rear-wheel drive (RWD) or on-demand four-wheel-drive (4WD) configurations.

Though basically a carryover from ’09, the 2010 Nitro has gotten a number of improvements, such as a deceleration fuel-shutoff feature included with the standard V6, a name-change for the SLT to SXT, standard heated mirrors, and six speakers are now standard with the base audio system. Also, the R/T Package has been discontinued, as has the slide-out cargo deck.

Unfortunately, the Nitro’s performance, refinement, fuel economy, and plain drivability simply don’t measure up to its major competition, Toyota’s FJ Cruiser and Nissan’s Xterra. Then again, Chrysler products have traditionally been a bit longer on looks than on performance, and for the money, the Nitro barely holds its own. 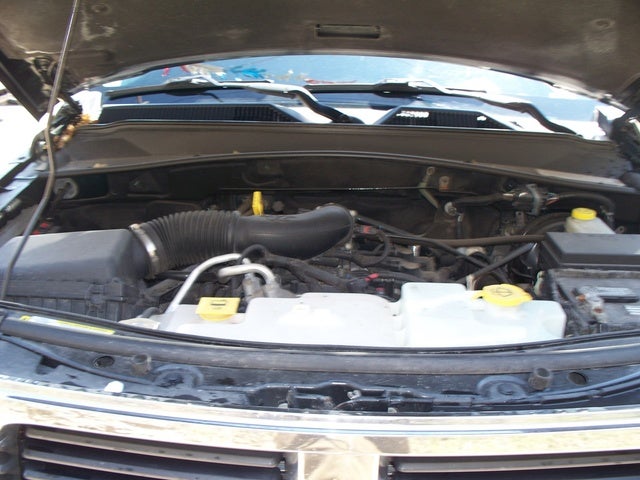 The standard powerplant for the 2010 Nitro lineup is a 3.7-liter SOHC V6 that, with its accompanying four-speed transmission, puts out 210 hp and 235 lb-ft of torque. The just-introduced deceleration fuel-shutoff feature is meant to economize on gas, but this engine still isn’t exactly kind to the wallet, earning a rating of 16/22 mpg in RWD trims and 15/21 in 4WD versions. However, this combo is able to tow some 5,000 pounds when properly equipped with the optional Trailer Tow Package, which includes anti-sway control and additional engine and transmission cooling.

Reviews seem to be mixed as to the verve displayed by both of the Nitro’s engines. Though virtually all reviewers note the 3.7-liter-equipped Nitro to be a tortoise off the line, with a 0-60 time of 9.5 seconds, some claim adequate merging and passing power with the smaller V6, while others find that it falls on its face in such situations, especially when fully loaded. The 4.0-liter powertrain, on the other hand is alleged to do 0-60 in a somewhat-better-but-still-not-blazing 7.7 seconds and to be marginally better on the highway when toting some weight. The consensus seems to be that the Nitro is well adapted to city streets, but a bit of foresight might be in order when taking it on the highway. 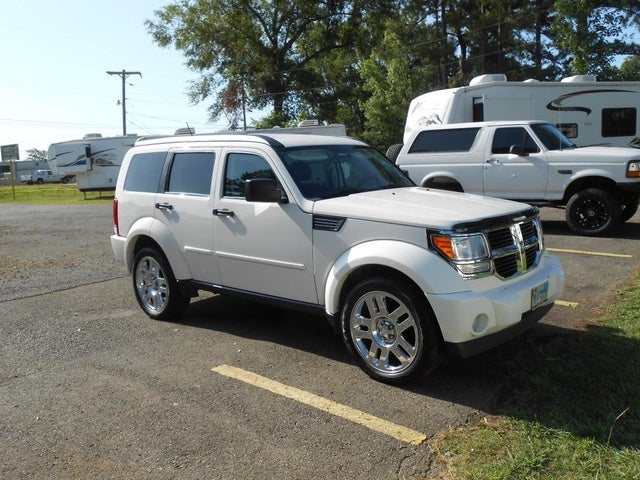 The 2010 Nitro is noted by most reviewers to ride fairly comfortably, with its front long-and-short-arm independent suspension handling most of the rougher patches of roadway. Front and rear stabilizer bars and a solid live rear axle give the Nitro a fairly solid feel on the road, but steering is noted by most reviewers to be a bit vague, with corner lean pronounced as either over-abundant or fun, depending on the point of view. Obviously, a sizable majority of reviewers claim that nimble handling is not the Nitro’s best feature.

The base SE is equipped with standard 16-inch wheels, while the SXT rolls on 17-inch wheels, with 20-inch aluminum wheels as an available option. Be advised that the 20-inch wheels have, according to at least one reviewer, a tendency to be just a bit less forgiving of uneven pavement.

Professional reviewers have mixed opinions regarding the Nitro’s handling characteristics, with a majority describing them as controlled chaos, while others consider the Nitro almost sporty. Braking characteristics are described by nearly all professional reviewers as reasonably decent, though one finds a bit of inconsistency in stopping distance. All in all, the Nitro is truck-like in its handling, but will provide a reasonably smooth and comfortable ride over most surfaces.

The 2010 Nitro offers part-time 4WD in both trims, with a mechanical center differential and electronic hi-lo gear selection providing on-demand power to all four wheels. Dodge recommends, however, that the 4WD system not be engaged on dry pavement. With no off-road options available, it would be best to keep the 4WD Nitro close to the beaten path.

Among the base 2010 Dodge Nitro SE’s standard comfort and convenience amenities are a roof rack and premium cloth upholstery. As well, such standard goodies as a fold-down passenger seat, power doors, windows, and heated mirrors, tilt-wheel steering, air conditioning, front and rear floor mats, a single-CD player, and satellite radio keep the Nitro near the top of the heap, comfort-wise. Options, meanwhile, include a power sunroof, Class III Trailer Towing Package, and in the Popular Equipment Group, speed control, deep-tint sunshade, and 17-inch alloy wheels. Additionally, 20-inch alloys are a stand-alone option.

Reviewers agree that the Nitro’s cabin is well laid out, with large, easy-to-read gauges and well-marked controls. However, nearly all reviewers also come to the conclusion that Dodge didn’t exactly strain the budget with its less-than-impressive cabin materials. Another point of agreement among reviewers is that the Nitro’s cabin is surprisingly quiet, at least on paved roads.

In crash testing, another divergence of opinion maintains the Nitro’s mystifying image. The National Highway Traffic Safety Administration (NHTSA) awards the 2010 Nitro five stars in both front and side crash tests, while giving it three stars in rollover testing. The Insurance Institute for Highway Safety (IIHS), meanwhile, gives the Nitro its highest rating of “good” in frontal offset testing, but only its second-worst rating of “marginal” for side impact protection. Confusing and confounding? Yes. A deal breaker? Probably not. 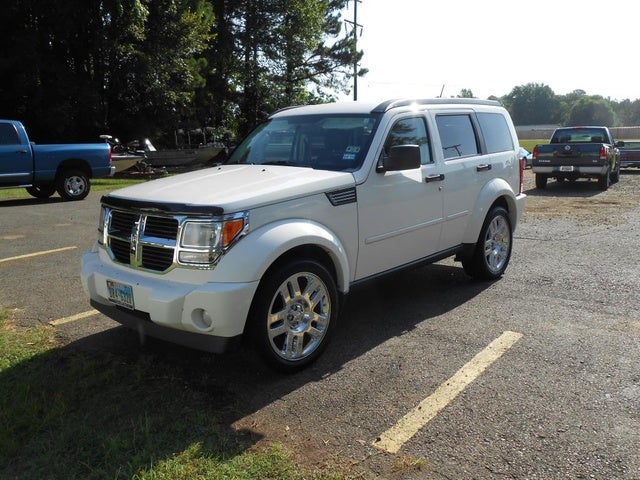 Very few owners have commented on the 2010 Nitro, thus many of the comments noted regard the similarly equipped ’09 trims. Among the top pet peeves that owners have with this boxy SUV is its legendarily poor fuel economy. Second to that are a number of complaints concerning a lack of acceleration from both V6s; indeed, more than a few owners complain that the Nitro is fit only to be driven on city streets, where its compact size comes in handy. More than a few owners grouse about its poor standard sound system, and a distracting rearview mirror location and the standard four-speed transmission take a hit or two from owners, as does the Nitro’s overall reliability.

On the upside, nearly all owners stress the fact that the Nitro seems to be worth its reasonable base price. Looks, cabin storage, ride comfort, cargo space, a plethora of standard features, 4WD traction, towing capacity, and a solid feel on the road all combine to make few owners regret their choice of the Nitro as the family car.

boxynow52 I just bought a used one and now kinda have mixed feelings. Mine had 46000 miles- 1 previous owner and I think I might have overpaid at $15999. Mine is a 2010 dodge nitro SE 4 WD/ tinted windows/ electronic door locks.

Guru6VDNG Why does the red dot flash when driving?

Have you driven a 2010 Dodge Nitro?
Rank This Car

i just got a used 2010 dodge se with 69,000 mile on it my engine light came on and also say gas cap i change my gas cap nothing happen i took it back to dealer they look at it and said my fuel line...

When driving my nitro revs to over 2 rmps sometimes 3 and isnt changing gears. Transmission fluid is full done at a shop. Some ppl say transmission some say a little plastic pink item in the shift...

194 views with 9 answers (last answer about a year ago)

I Have 2010 Dodge Nitro Keep Leaking On My Flooe Board Had Water Pump Repka...

46 views with 3 answers (last answer about a year ago)

Trying To Get Customized Rims. What Will Fit?

My 2010 Dodge nitro has hot air only. Does not matter where the temperature control dial is set or if I have the air conditioner on still hot air. So any ideas what parts I start replacing first?