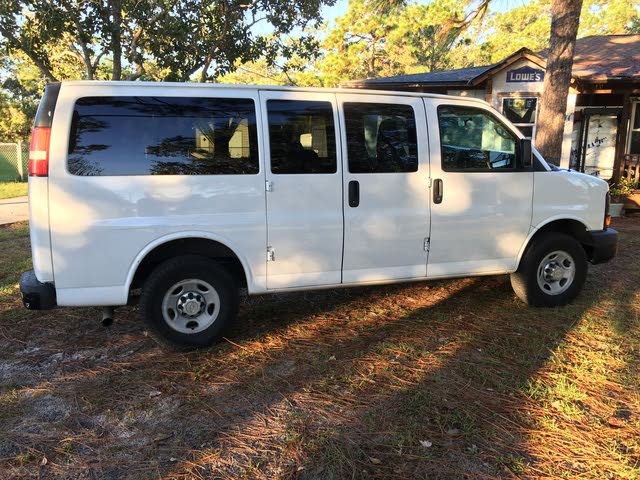 Glacial change is a fact of life in the full-size van segment, and the 2010 Chevrolet Express is no exception. This boxy passenger wagon has been around for some 14 years in its present configuration and figures to continue that way indefinitely. Sure, some tweaking has been done over the years to its engines, creature comforts, and safety items, but maneuverability, pampered luxury, and styling pizazz seem destined to remain out of this big wagon’s purview.

The three-door 2010 Express is available in three trim levels, the half-ton 1500, three-quarter-ton 2500, and one-ton 3500, which can seat from eight to fifteen passengers. Each Express trim is further refined into the fleet-oriented LS and the higher-end LT versions. The 1500 trim, meanwhile, is also available with full-time all-wheel-drive (AWD) capability. All trims feature V8 power, with the 2500 and 3500 offering a standard 6.0-liter V8 engine and six-speed automatic transmission that are generally conceded to be the most potent powertrain in this segment. Additionally, the 3500 trim is available in the 15-passenger extended version (Ext) that’s some 244 inches in overall length and sits on a 155-inch wheelbase. Standard-length trims are 224 inches long with a 135-inch wheelbase.

Cargo capacity is a sizable 217 cubic feet for the standard-length versions, with the 3500 Ext offering some 253 cubic feet. Alas, accessing this spacious cube involves the difficult chore of removing all the rear seats, which, quite frankly, involves far too much labor and time to be worth the effort in many cases. All trims, however, have split-opening passenger-side and rear cargo doors that are invaluable for loading both cargo and passengers.

Competition for Chevy’s jumbo-sized Express consists of its twin, the GMC Savana, and Ford’s diligent but slightly less powerful E-Series Wagon, as well as the more maneuverable and roomier, but somewhat over-priced and under-powered Dodge Sprinter. The 2010 Express remains below its rivals in market share, but nonetheless offers a solid choice for getting a crowd from here to there. 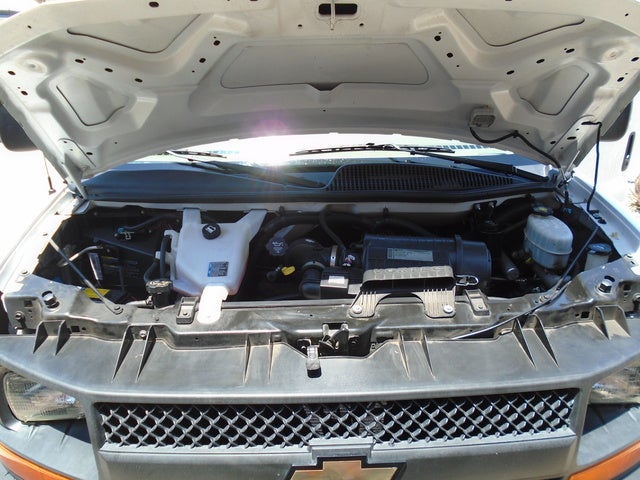 Standard power for the Express 2500 and 3500 trim levels is provided by the highly regarded if not exactly economical 6.0-liter FFV VVT V8. This monster, under the management of its standard six-speed automatic transmission, pounds down 323 hp at 4,600 rpm and 373 lb-ft of torque at 4,400 rpm. Towing power is bumped to 7,600 pounds for the standard-length wagons and 7,300 pounds for the stretched 3500 Ext trim. Additionally, this big V8 comes with standard auxiliary engine and transmission cooling units. Mileage figures are not available for the 6.0-liter V8, but road tests indicate that 12 mpg seems about average.

Only the Express 1500 trim is offered with AWD, which is governed by a viscous center-mounted limited-slip differential. This AWD capability trumps Ford and Dodge and makes the Express 1500 the logical choice for wintry driving conditions.

Professional reviewers note better-than-adequate acceleration for both V8 engines, with the 6.0-liter obviously most impressive in passing and merging. Also mentioned is the lack of fuel economy with both powertrains, though it’s generally conceded that these sorts of vehicles will never be exactly frugal.

Equipped with front long-and-short-armed independent suspension, front stabilizer bar, and a solid live-axle rear suspension, all supporting a decently beefy frame, the 2010 Express is praised by most reviewers for providing at least a semblance of ride comfort, even over rough pavement. Dips and peaks are taken in stride, according to many reviewers, but noticeable corner lean and noseplow, typical of this segment, will take a bit of getting used to. The 1500 trim levels roll on 17-inch wheels, while the 2500 and 3500 trims ride on 16-inch wheels.

Steering, of the rack-and-pinion variety on the 1500 trims, is generally noted by professional reviewers to be competent if a bit numb, but then, this is a work vehicle, not a racing machine. Four-wheel disc brakes ensure, by all reviewers' accounts, powerful and true stopping power, but with a wagon of this length and weight, turning radius is massive, and stopping distance is significantly longer than, for example, a minivan's. 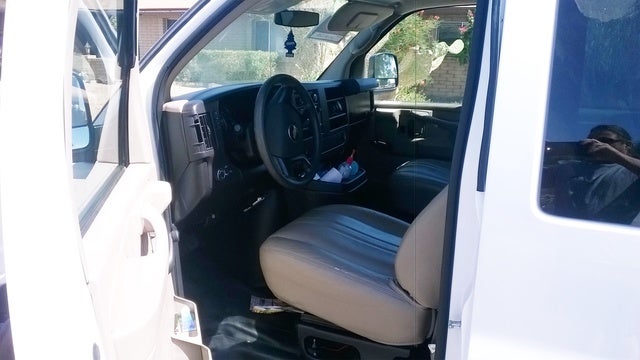 Reviewers lament the continued use of low-grade plastics in Express cabins, as well as the model's lofty stance, which makes life a tad difficult for shorter passengers when entering and exiting. Another disadvantage noticed by virtually all reviewers is difficulty in removing the bulky rear bench seats for added cargo space. A majority of reviewers do, however, laud the Express’s large, easy-to-read gauges and logically (for the most part) placed controls. Most reviewers condemn the narrow footwells, but concede plenty of leg-stretching room, at least in front.

Hefty and tall, the 2010 Express uses its size advantage to provide a sizeable amount of passenger protection. Complementing this bulk are four-wheel ABS, electronic brakeforce distribution, and StabiliTrak traction and stability control. Front-, second-, and third-row head airbags, dusk-sensing headlights, and daytime running lights round out the standard safety equipment found on this full-size wagon.

The National Highway Traffic Safety Administration (NHTSA) gives the Express five stars in front impact protection testing for driver and passenger, while allowing only three stars for rollover protection with both RWD and AWD trims. Side-impact protection was not tested. The Insurance Institute for Highway Safety (IIHS) has no data on the 2010 Express. 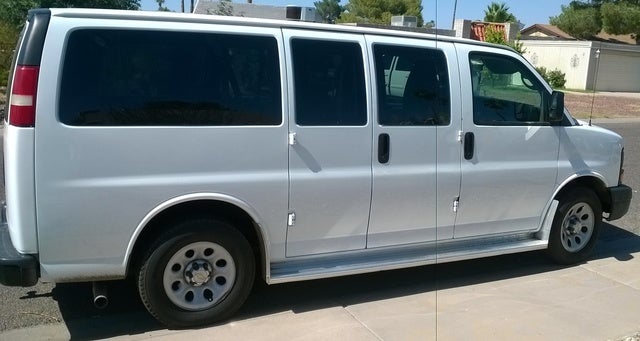 Since the 2010 Chevrolet Express is generally a fleet vehicle, owner comments regarding its various advantages and disadvantages are few and far between. However, the consensus over the past two or three years suggests that owners remain disgruntled with this big wagon’s nonexistent fuel efficiency, build quality, handling, and reliability. A touch of class here and there in cabin ambiance would also be much appreciated by owners and operators.

Owners and drivers alike, however remain impressed with ride comfort as well as passenger and cargo room, while V8 engine performance continues to be a strong suit with the Express passenger wagon. A surprising number of owners also remain satisfied with the dated-yet-functional styling of the versatile Express.

What's your take on the 2010 Chevrolet Express?

Have you driven a 2010 Chevrolet Express?
Rank This Car

Neither front or rear blower motor ac or heat is working on my parent's 2010 chevy express 3500 van. When we set it so that it blows outside air, neither the heat or air works in the front or rear, a...

Where Is The Camshaft Sensor Located ?

Where is camshaft sensor ?

Battery is new and charged. Lights do not dim when trying to crank. While key is in 'start' position only the engine light is lit. When released back to 'on' position the dash lights back up.

Does 2010 Express Have A Voltage Relay. Alternator Only Charges At High Rpm...