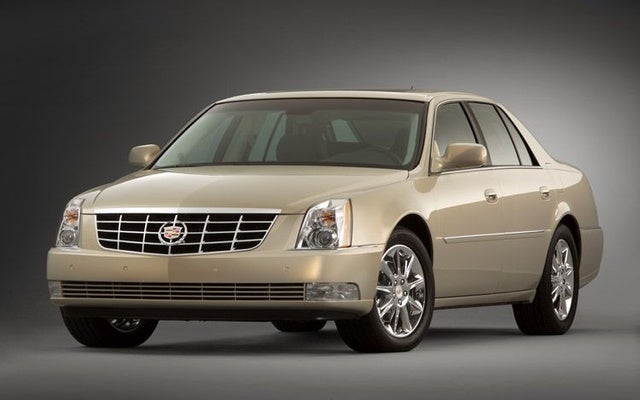 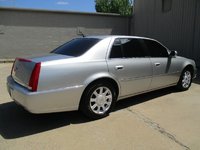 Performance takes a hit with the DTS's front-wheel drive and four-speed transmission, and the interior doesn’t feel as luxurious as others in the class.

This is your grandfather’s Cadillac. If you’re looking to cruise in comfort worthy of a 1950s high-roller with 21st-century safety and technological upgrades, then the 2010 DTS is for you. If you want a luxury sedan that feels like a sports car, look elsewhere.

The 2010 Cadillac DTS is an American luxury car in the classic sense with its floating-on-air ride, powerful engine, and enormous interior and exterior measurements. The DTS is GM’s largest sedan (it's 207.6 inches long and 74.8 inches wide) and even has an optional front-seat bench to up seating capacity to six. The soft ride, all-day comfortable front seats, and vast backseat make this an ideal family vehicle or cruiser for long and winding road trips.

The DTS comes in four trims – Base, Luxury, Premium, and Platinum – the major difference between the four being optional features and extra horsepower for the Platinum's V8. The DTS doesn’t even try for sporty - Cadillac has left that for its STS models, which are rear- and all-wheel drive, as opposed to the front-wheel-drive DTS.

There are almost no changes for the DTS in 2010, just a few new exterior color choices and optional Side Blind Zone and Lane Departure Alert systems. There were rumors that the DTS might be discontinued in 2010, which may explain its lack of upgrades. However, as the old-school DTS's style suggests, Cadillac wasn’t looking to push the envelope with the this car. Instead, it’s a sedan behemoth from days past with modern technologies tucked into and under that classic skin. 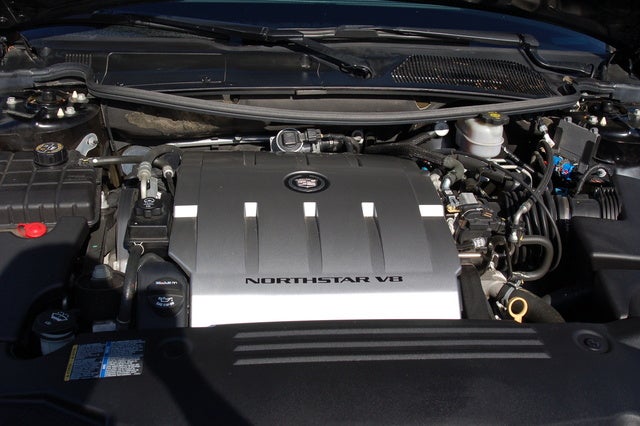 The Base, Luxury, and Premium DTS trims are powered by a 4.6-liter Northstar V8 that produces 275 horsepower at 6,000 rpm and 295 lb-ft of torque at 4,400 rpm. The engine is mated to an electronically controlled Hydra-Matic four-speed transmission with overdrive and gets 15 city/23 highway mpg.

The Platinum trim comes with a high-performance 4.6-liter Northstar V8 NHP engine that produces 292 horsepower at 6,300 rpm and 288 lb-ft of torque at 4,500 rpm, is mated to a Hydra-Matic four-speed transmission with performance algorithm shifting, and gets 15 city/22 highway mpg.

Premium-grade gas is recommended for all DTS models.

Both V8 engines provide plenty of power for merging and passing, and both go from 0-60 mph in about 7.0 seconds. What testers have not liked is the four-speed transmission - most vehicles in this class have at least a five-speed transmission, and many have a six. The result is slow shifting, especially when downshifting, and an under-utilization of the V8’s power.

The DTS offers a supremely comfortable ride on the highway and handles competently in the city, despite its 4,009-pound curb weight. The suspension on the Base and Luxury trims hides most bumps in the road, but the car has some body lean taking moderate to fast turns. The Premium and Platinum trims come with a Magnetic Ride Control that, in Cadillac’s words, “resolves the inherent conflict between taut handling and a fluid ride when coupled with a suspension that humbles S curves and bumps in the road alike.”

The steering on all trims is responsive, but can feel indistinct at times. Gauges are clear, easy to read, and well organized. Wind noise is minimal at most speeds, but some testers have noted that tire noise on coarser roads seems loud for a vehicle in this premium class.

In the end, the DTS is all about a luxuriously comfortable ride, not a sporty one.

The interior is a stylish blend of leather, wood, and plush surfaces, though it may not feel as opulent as some competitors, like the Mercedes S-Class and Lexus LS.

Reviewers and owners agree the DTS provides exceptionally comfortable seating. The standard front bucket seats feel like thrones and can fit a range of body types with multiple seat and steering wheel adjustments. The ample rear seat can easily fit two males over 6 feet tall with plenty of room in the middle for a third passenger. The optional front bench is similarly spacious, but safety can be a concern when fitting three, especially if one is a child, in the front seat. Heated and cooled front seats and heated rear seats are standard on the non-Base trims. All trims come with leather seating upholstery.

The DTS’s trunk is exceptionally large at 18.8 cubic feet, enough room to handle four golf bags. Interior cargo space is limited, with most of the cavernous inside reserved for passengers. There is a small opening in the rear seats to access the trunk, but it does not provide the same type of flexible cargo space as fold-down seats.

All in all, the interior has a retro feel coupled with ample technology, rather like the exterior. 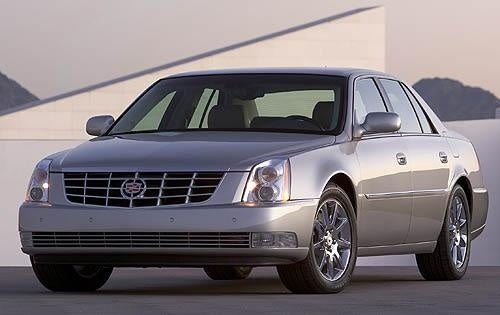 Consumers who bought the DTS seem to have known exactly what they were getting into and are very happy with the car. Owners universally rave about the car’s size and style. There are few to no complaints about slow shifting or sloppy handling. Instead, most owners love how the DTS drives. One even went so far as to say, “The ride and handling characteristics are great and the car easily takes on the poorest of American roads as well as the best roads.”

The common theme among rare complaints has to do with the lack of advanced technology in the sound and navigation systems. But these were minor cons mixed in with piles of pros.

drewskins This review is absurd! VAST rear seats? Did you sit in the car? I own one. My 2004 Concorde has more backseat room than does my DTS. For backseat room, talk about an Odyssey!

Have you driven a 2010 Cadillac DTS?
Rank This Car

I use Toyo but they only last 40,000 miles if lucky. Good in snow and on wet surfaces, but is there any better tire?

Have A 2010 Cadillac Dts I Went Into The Bank And Came Back Out And The Car...

I went intobank and came back out and now the car is not starting it cranks but its not turning over battery is good I have gas is this a ignition coil issue or sensor or what I checked all my fuses a...

Paperwork Is Needed To Complete This Transaction Using CarGurus Pay?

Hello. I am selling my Mother's car on your site. We have already done a test drive with the prospective buyer and agreed to an acceptable offer. My Mother's name is on the title. There is no lien o...

How Do You Calculate The Delivery Fees?

Set my alarm from my remote keypad & accidentally locked keys in trunk. Had to unlock door with a wire hanger & when I did alarm went off but since keys were locked in trunk had to get to trunk th...