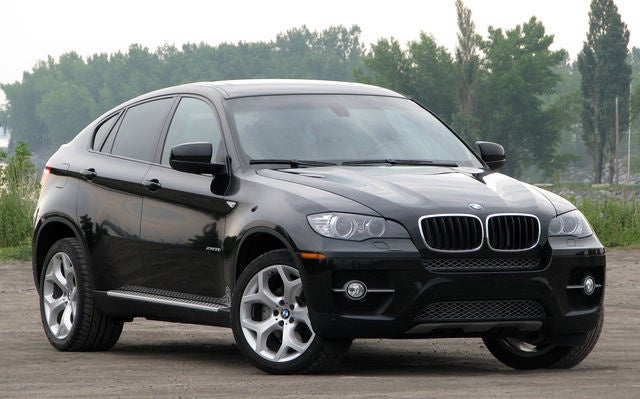 Now in its second year of production, the BMW X6 sport activity coupe enters the 2010 model year with a number of new standard features, including HD radio and a power-operated tailgate. In addition, the 2010 X6 comes equipped with an updated, fourth-generation version of BMW's iDrive controller, which drivers can use to manage the X6's climate control, audio, and optional navigation systems. Criticized in the past for its excessively complicated operation, the iDrive system now features improved high-resolution graphics, revamped menu structures, a redesigned controller, and more programmable memory keys.

New optional features for the X6 include an updated navigation system with an 8.8-inch display and an 80-gigabyte media server. In addition, BMW upgrades the optional rear-view camera, so it now includes a top-view perspective, and adds automatic high-beam headlights as a new optional feature for 2010.

The xDrive35i and xDrive50i trims, which carry over from the previous year, complete the X6 lineup for 2010. A 3.0-liter, twin-turbo six-cylinder engine, developing 300 hp and 300 lb-ft of torque, drives the xDrive35i, while a 4.4-liter, twin-turbo V8 engine, producing 400 hp and 450 lb-ft of torque, powers the xDrive 50i. In both trims, the engines link to a six-speed automatic transmission with Sport and Manual shift modes. Steering-wheel-mounted paddle shifters come standard.

All X6 trims come equipped with BMW's intelligent xDrive all-wheel-drive technology, which adjusts instantly to accommodate all types of road conditions. For 2010, BMW adds Dynamic Performance Control, which works with an innovative rear differential to multiply torque to either of the rear wheels to help steer the vehicle on slippery or loose road surfaces.

Outside, the X6 continues to display a muscular design, with the distinctive BMW dual-kidney front end, a high waistline, a tapering roofline, and contoured wheel arches. Inside, the X6 seats four passengers in an upscale cabin. Such features as Nevada leather upholstery, Ash Grain wood trim, 10-way power-adjustable front seats, and a two-way power glass moonroof come standard. Other standard features for the X6 include a leather-wrapped steering wheel, automatic climate control, and a 10-speaker, 205-watt AM/FM audio system with HD radio and two subwoofers.

The xDrive50i adds 20-way power-adjustable front seats, while the new ActiveHybrid X6 trim adds such standard features as Nappa leather seats, a 6-CD/DVD changer, four-zone climate control, and heated front seats. The X6 offers a respectable 25.5 cubic feet of storage space behind the rear seats, which expands to 59.7 cubic feet with the rear seats folded down.

Hello, I have a BMW 2010 X6 xdrive 30d. I hear a grinding noise when turning from a stop to a extreme left or right slowly. Mostly heard when turning left. Also i hear some faint clunking noise on b...

Can't Open The Door With The Fob R The Key