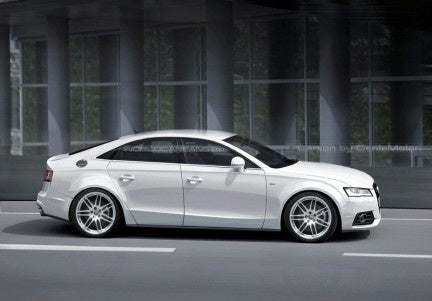 A blend of legendary sports car power and subtle sophistication, the 2010 Audi S6 allows you to live in both worlds at the same time. This high-performance super sedan is powered by a Lamborghini V10 engine, yet retains the classically understated style of an Audi. Who says flash and class can’t coexist?

With an MSRP starting at $76,100, the S6 is clearly an exclusive vehicle. It won’t float down the highway like some luxury four doors, like Audi’s own A8, and it might not burn up a twisting mountain road like a BMW M5, but it can do both with grace and confidence. Another way to look at this, and some critics do, is that the S6 is a jack-of-all-trades and master of none, and that lack of mastery may be disappointing to some, especially in this price range.

The S6 is the high-performance version of Audi’s A6, and the two vehicles have a very similar look. Yet the S6 distinguishes itself with a more aggressive front end – a unique split grille with a crosshatch design, a deeper-set bumper, and LED daytime running lights set in two rows of five beneath the bi-xenon high-intensity-discharge headlights (where the foglights are placed on the A6) provide the S6 with its most distinctive front-end feature. The S6’s profile is gentlemanly and marked with 19-inch wheels and aluminum trim on the mirrors, windowsills, and doorsills. A smoothly integrated rear spoiler and four oval exhaust tips finish the refined look on the back end.

The growl rumbling from under the hood of your S6 will likely attract attention, and when you reveal that it’s a Lamborghini growl, the attention will only increase. The S6’s 5.2-liter V10 is sourced from its corporate relative, the Lamborghini Gallardo. The normally aspirated, direct injection V10 churns out 435 horsepower at 6,800 rpm and 398 lb-ft of torque at 3,000-4,000 rpm. It is mated to a six-speed Tiptronic transmission (which can also be operated manually), gets from 0-60 in 5.1 seconds (according to Audi), and gets 14 city/19 highway mpg.

The V10 does more than just start conversations. It pushes the S6 to top speeds with very little effort, despite the vehicle’s 4,500 pounds. The standard quattro all-wheel-drive system also helps the driver control the S6’s heft in normal road conditions and provides even more handling assistance in difficult conditions. The antilock brake system with vacuum power assist and electronic brake-pressure distribution receives high praise from all reviewers, even the hard to please.

The S6’s handling is further enhanced by its sport-tuned suspension – four link in the front with upper and lower control arms, stabilizer bar and separate coil springs/gas-charged shock absorbers and fully independent trapezoidal-link in the rear, with a stabilizer bar and the same shocks as the front. This sport suspension detracts some from the highway ride, but the S6 can provide a luxuriously comfortable week-long road trip. Its Servotronic speed-sensitive steering delivers steering assistance according to the vehicle’s speed, allowing for optimal control both around town and on the highway.

Some critics complain that the S6’s performance isn’t high-end enough, and some find the exterior styling on the droll side, but none of them have harsh criticisms for the S6’s interior. The leather and aluminum trim with birch wood accents (or the available carbon fiber inlays) make an immediate impression of stylish elegance, and the immaculate construction quality and deep list of high-tech features confirm that impression.

The S6 received the highest possible scores in frontal-offset and side-impact crash tests performed by the Institute for Highway Safety. Standard safety features include an electronic stability system with traction control, antilock brakes, four-wheel drive, side-impact airbags for the front seats, and side curtain airbags for the both rows.