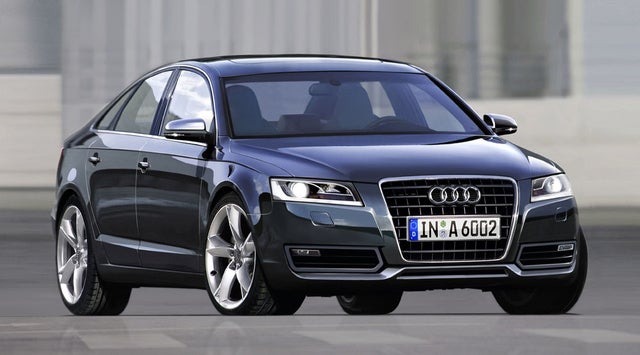 The 2010 Audi A6 is no coward. This four-door luxury sedan wades into a fight with some major heavyweights – the BMW 5 Series, Mercedes-Benz E-Class, and Jaguar XF to name a few – and holds its own. The A6’s refined interior matches or bests all its competitors, the all-wheel-drive Quattro system delivers inspired, road-gripping performance, and its exterior lines are distinguished.

Redesigned in 2009, the A6 remains essentially the same for 2010 and is available in three trims – the base 3.2, the 3.0T, and the 4.2, all named for their engine sizes. The 3.2-liter V6 in the base trim produces 265 horsepower and 243 lb-ft of torque, gets 18 city/28 highway mpg and comes standard with a continuously variable transmission. The problem with this trim is that it is not available with the Quattro system (front-wheel drive only), which reduces its handling to just average. Plus, the 3.2’s drivetrain is competent, but it’s not nearly as powerful as the turbocharged 3.0-liter's and nearly identical in terms of efficiency.

Clearly, the supercharged 3.0-liter V6 (300 horsepower, 310 lb-ft torque) makes the 3.0T the trim of choice. Not only does it get decent mileage, but it goes from 0-60 in 5.8 seconds according to some tests, a faster time than the 4.2 posted, and it can compete with the heavy-hitting powerplants from German rivals Mercedes and BMW. It also comes standard with the six-speed automatic transmission and Quattro.

Regardless of engine or drive system, the A6 is a quietly regal highway cruiser with plenty of power to pass or merge at any speed. When it comes to carving around corners or rolling through twisting back roads at high speeds, however, the Quattro system is a must. With Quattro in play, the A6 practically melds with the road and begs to be driven to its limits, which are vast, and slices through difficult weather conditions with ease.

The A6’s cabin is crafted with a meticulous attention to detail that can impress even among the sophisticated elite of the luxury class. High-quality materials like genuine walnut wood, Volterra leather, and brushed aluminum blend seamlessly together in a stylish yet practical layout.

Heated seats with 12-way power adjustments and driver’s memory, advanced cruise control, rain and light sensors, Bluetooth, HomeLink univeral garage door opener, and LED lighting all come standard, as does the latest generation of Audi’s MMI Navigation system, which is now easier to use, equipped with better graphics, and one of the few changes for 2010.

Can't Open Driverside Door With The Remote The Other Door Open With No Prob...

My husband placed too much coolant into the reservoir, after driving for 20 minutes we received a message to shut engine off. Was the excess coolant to blame

Please Explain How Deal Values Changes From Day To Day Even When The Price ...