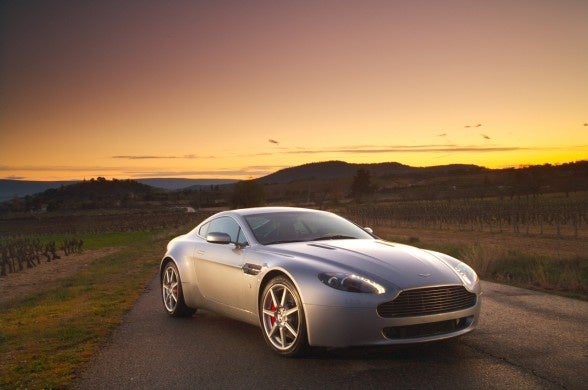 Funny to call anything Aston “entry-level,” but that’s the nickname the V8 Vantage has been stamped with. Its bigger brother the V12 tends to hog the spotlight, but for 2010 the V8 gets some hand-me-downs like clear tail lamps, metal mesh for the hood and side vents, and sills derived from the N400 special edition we first saw at the 2007 Frankfurt Motor Show. On top of those gorgeous aesthetic changes, there are some new options for the V8, including forged, 19-inch 10-spoke alloys, lightweight seats that save nearly 40 pounds and an ear-shredding 1,000-watt Bang & Olufsen stereo.

And because Aston realizes that anyone buying a car that gets 12 mpg city/19 highway must really care about the environment, they’ve tuned the transmissions and remapped the ECU to lower the CO2 rating. Now that’s British racing green.

Otherwise, things stay the same for the baby of the bunch, and that’s a very good thing. It has the classic sports-car layout: RWD and a thumping 4.7-liter V8 sitting below the hood ready to deliver its 420 hp and 346 lb-ft of torque, with all the violent fury shooting straight out of the rear with one of the most pleasing exhaust notes you can hear. The 6-speed manual is still the better choice over the 6-speed automated manual, despite a heavier clutch pedal than on other Astons, although the automated option has improved. Same with the steering, which delivers a solid and responsive feel but can get quite heavy at low speeds.

This is a driver’s car, not the road-eating mile-munchers the DB9 and DBS are, and as such it’s less forgiving than its bigger brothers. Equipped with the Sport Pack, it’s a violent corner carver, but a bit too harsh for most. The trade-off for that is a nimble assuredness in corners that imparts a confidence that’s hard to beat. Body lean? You’ll forget what it is. However, with the standard suspension it’ll still out-handle most anything on the road and won’t break your spine while doing it.

But this is an Aston Martin, and that means luxury hasn’t been chucked out the window for the sake of performance. On top of that, it’s a British supercar, and that means you won’t face the kind of exotic quirkiness you’d get from the Italians. There are no scissor doors or lounge-chair seats here. Entry and exit can be executed as easily by an octogenarian as a 30-something playboy, and when you slink into the seats, you’ll be greeted by a world of genuine metal and high-quality leather with contrast stitching. The switchgear can get a bit confusing though, due to its slightly muddled layout, with the navigation system being a standout low point. Seats are long-distance comfortable, although shorter drivers will have trouble seeing over the rather tall dash, but no rear occupancy means taller drivers will feel no guilt pushing the seat all the way aft.

Aesthetic changes this year make the V8 Vantage even better looking, and that’s not easy. A decreased CO2 rating makes it better for the environment, and that’s almost irrelevant. What you have with the Vantage is a car that is an entry-level Aston in price alone.

Have you driven a 2010 Aston Martin V8 Vantage?
Rank This Car