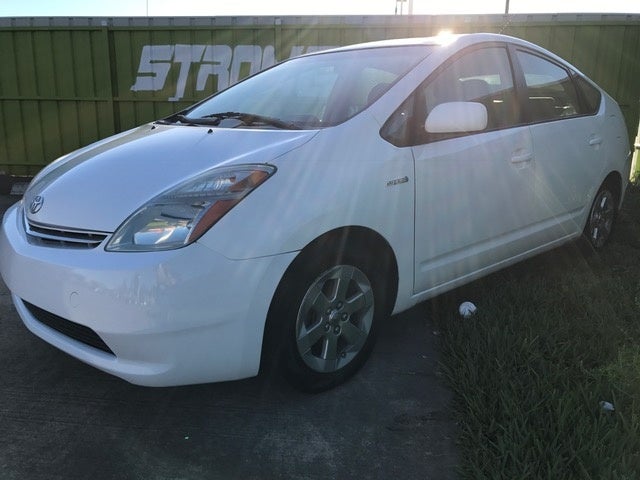 The most popular hybrid on the road, the 2009 Toyota Prius gives drivers something to cheer about with its high-40s fuel economy and surprisingly easy maneuverability.

Fuel economy comes at a price, primarily an underpowered engine, poor visibility, and loss of rear passenger space, and it's hard to know whether the fuel savings will ever make up for the high cost of the '09 Prius.

Toyota's '09 Prius continues to lead the hybrid pack in terms of mileage ratings and sales. Drivers come for the fuel efficiency, but leave pleasantly surprised with the roomy interior and quiet handling dynamics of this bubble-shaped hatchback. Owners will have to decide whether the reduction in environmental impact is worth the sacrifice in rear visibility and engine power.

Getting ready for a redesign in 2010, the 2009 Toyota Prius returns unchanged. As the best-selling hybrid on the market and the most fuel efficient (according to the EPA), there's little reason to mess with success. Set to undergo an exterior styling revamp, the current Prius retains its bloated bubble shape and fuel-efficient hybrid engine. With numbers well into the 40-50 mpg range, this front-wheel-drive hatchback lets commuters feel good about their reduced carbon footprint, while its roomy interior and easy handling continue Toyota's reputation for making solid family-oriented cars.

The '09 Prius comes in Standard, Base, and Touring trims. The Standard represents the most economical of the three, although it still offers full power features and a CD player. The Base adds a few more bells and whistles, and the Touring rides on a sport-tuned suspension, for slightly tighter driving dynamics. It boasts 16-inch wheels, where the Base and Standard carry 15-inch wheels.

The dual-mode hybrid system delivers an amazingly quiet ride while simultaneously reducing emissions and saving drivers lots of anguish at the gas pump. With 48/45 mpg and a nearly 12-gallon tank, this car can go from San Diego to San Francisco and still have a couple gallons to spare. And drivers can still feel good about their environmental impact, since the Prius qualifies as a Super Ultra Low Emission Vehicle. The '09 Prius remains slightly underpowered, but no one buys a hybrid to race down the highway. 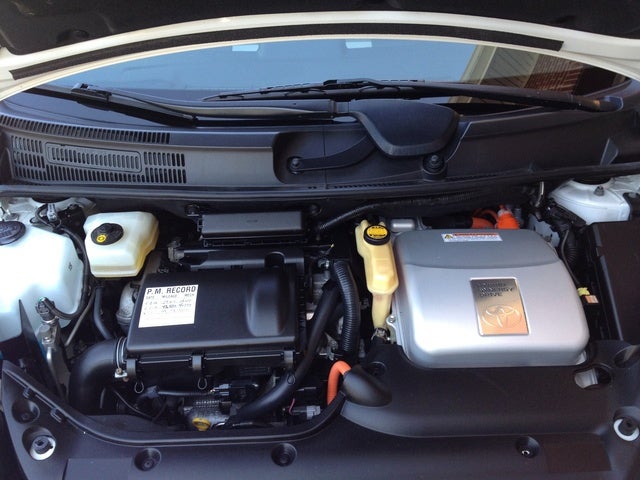 A dual-mode hybrid, like the '09 Prius, means the car can be powered by either the gas engine at high speeds, the electric motor at low speeds, or a combination of the two in order to achieve adequate power with maximum fuel efficiency. Filling the role of the gas engine is a 16-valve, 1.5-liter DOHC inline four, which delivers 76 hp and 82 lb-ft of torque at 4,200 RPM. Two electric motors (MG1 and MG2) put out 67 hp and an incredible 295 lb-ft of torque at a low 1,200 RPM. Together the two deliver 110 hp and outstanding mileage numbers of 48/45 mpg. The Prius is no powerhorse, however, with a 0-60 time of 10.5 seconds.

Like most hybrids, the '09 Prius features regenerative braking and engine cutoff during idling and deceleration, in order to reduce emissions and save on fuel. The two motors serve different functions. One focuses solely on powering the front wheels, while the other focuses on acceleration from a standing start and recharging the NiMH battery. The battery alone powers all the audio, climate, and power functions, representing another important energy-saving feature.

The sole transmission is an ECVT, or electronic continuously variable transmission. CVTs generally provide smooth and seamless shifting because they feature an infinite number of gears and reduce the delay caused by hunting for the right gear. They generally take some getting used to, but most drivers enjoy their quiet and easy performance. The ECVT supposedly reduces noise and emissions even further, by replacing the infinite gear set with one fixed-gear ratio and using the electric motors and engine to accelerate. Drivers attest to the quiet smoothness of the Prius, with several saying they barely know when the gas engine kicks in and others claiming they don't realize how fast they're going until they look down at the speedometer.

The '09 Prius proves to be a great commuter car thanks to its higher city mileage ratings. Because city driving involves slower speeds and constant braking, the electric motor does most of the work in terms of engine and regeneration power – thus the improved fuel economy. Highway driving involves higher speeds and less braking, so the gas engine kicks in and does all the work, slightly reducing fuel economy.

According to test drives from 2008, the Prius moves nimbly around town, despite its rounded shape and tall greenhouse. At higher speeds, the hatchback has the tendency to sway in the wind and exhibit some body lean. Both the 15-inch alloy wheels on the Standard and Base and the 16-inchers on the Touring provide strong road grip, while the Touring's sport suspension offers a firmer, if slightly harsher ride.

Owners of the '09 version generally agree with critics about the tight handling dynamics and small turning radius, but do complain about the underpowered drivetrain. Anyone buying the Prius for horsepower, however, is missing the point. The car's appeal lies in its eco-friendly fuel economy, which it delivers both expertly and quietly. Its quiet ride comes courtesy of the ECVT. The fixed gear ratio takes away the grinding associated with hunting for gears. Even the transition from electric to gas power feels and sounds amazingly seamless, with most drivers relying on the mileage monitor to relay information about the powertrain.

Despite its odd shape, the '09 Prius actually fits four adults, although anyone over 6 feet tall might want to stay out of the back seat. The sloping roof cuts off about 2 inches from the 39 inches of headroom up front. Legroom, on the other hand, feels roomy and comfortable throughout the cabin, with 41.9 inches up front and 38.6 in back – comparable to that found in a Camry sedan. The Prius also offers a good-sized trunk, which holds up to 14.4 cubic feet. The rear seats split-fold flat 60/40 and feature a fold-up armrest to accommodate a third, albeit very skinny, third person in the back.

Supplementing the trunk storage are a center console armrest upfront, underfloor compartments, and twin gloveboxes. Test drives of the current model and the identical 2008 version praise the ergonomics of the cabin, with easy-to-read gauges located on the dash and 11 buttons on the steering wheel to control climate, cruise, and audio functions. Most of these functions are replicated on a touchscreen, but this monitor gets mixed reviews from critics and owners. Many find it complicated and a magnet for dirt, smudges and fingerprints. Visibility out the front remains expansive, thanks to a large sloping windshield. The rear window, on the other hand, severely limits visibility. It seems oddly designed, facing slightly upward and featuring a horizontal bar that cuts the window in two.

The '09 Prius offers a comfortable set of standard equipment, which owners paying its high pricetag will appreciate. All trims feature a 6-speaker CD/MP3 player, the well-liked push-button start, remote entry, Bluetooth, and power windows, locks, and mirrors. The Base adds the wheel-mounted controls, cruise control, heated mirrors, and a rear spoiler. The Touring basically mimics the Base, but adds sporty appearance features, such as foglights, xenon headlamps, and larger alloy wheels. Options offer a voice-activated navigation system, leather trim and upholstery, and a JBL sound system with 6-CD changer, MP3 jack, and satellite radio. However, buyers should be aware that these creature comforts carry a high pricetag and significantly increase the cost of the Prius.

The '09 Prius earns four stars in every category of NHTSA crash tests and a Good rating from the Insurance Institute. Comparable to most sedans and hatchbacks these days, the Prius offers standard front disc and rear drum brakes, along with 4-wheel ABS and electronic brakeforce distribution, traction control, and dual front-side and side curtain airbags for both rows. Stability control is available as an option. A tire monitor for the 15- and 16-inch wheels also comes standard. Bundled option packages include helpful accessories, such as a rearview camera (a must-have, say owners), a navigation system, and auto-dimming mirrors.

Owners go crazy for the 2009 Prius, obviously overjoyed by its fuel economy, but also surprised to find a lot more highlights in this hatchback. Among the favorite features are the backup camera and SmartKey. Drivers also love the comfortable seats and spacious interior and find the engine and ride quiet and smooth. Several admire the Prius's quick acceleration, although others find it lacking in off-the-line and passing power. CarGurus owners, commenting on the identical 2008 version, offer the same praise for the fuel savings, maneuverability, and roomy cabin.

Along with the underpowered engine, the biggest complaint focuses on the lack of rear visibility, hampered by the strange layout of the rear window. The lack of lumbar support detracts from front seat comfort on long trips, and several drivers complain about the annoying backup chime.

Gentry Excellent on MPG when you have long commute. Overall inexpensive on maintenance but uncomfortable ride.

Users ranked 2009 Toyota Prius against other cars which they drove/owned. Each ranking was based on 9 categories. Here is the summary of top rankings.

Have you driven a 2009 Toyota Prius?
Rank This Car

Has this happened to you? We were driving on Highway 70 through the Rockies and climbing to the Eisenhower Tunnel at 11,000 feet. On our way up the mountain, the car's battery ran out of power ne...

How Do You Turn On The Bluetooth In The 2009 Prius?

I have a 2nd gen 2009 Prius T Spirit which I have owned from new and which has now done 205k miles without any real issues. The car was stationary for nearly 4 weeks and when I came to move it the ...

HOW WILL I KNOW THE 2009 PRIUS HYBRID BATTERY IS DEAD?