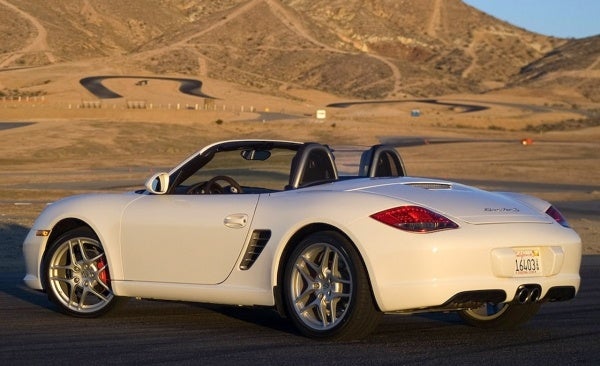 Just like the Cayman, the 2009 Porsche Boxster gets revised styling and more power, further blurring the already shaky distinctions between the two. These mid-engine roadsters come in two trim levels, with distinct engines for each, both of which see power increases for 2009. The Base trim increases both displacement and power, with a 2.9-liter flat six replacing the outgoing 2.7, with an accompanying power increase to 255 hp, up 10 from last year. The S trim gets 310 hp for its 3.4-liter flat six, a 15-hp increase from 2008. The standard transmission is a six-speed manual, although the optional automatic gains two gears, up to a seven-speed from 2008’s five in their new Doppelkupplungsgetriebe (double-clutch gearbox, translated literally), which is supposed to shift 60 percent faster than the old setup. Accordingly, EPA estimates of 23/32 mpg for the manual are impressive, although figures have yet to be released for the automatic.

Steering has been enhanced with a modified valve control map on the steering gear, delivering a lighter steering feel, and brakes have been similarly upgraded. Porsche Stability Management (PSM) is standard on both trims, and provides Brake Pre-Load and Brake Assist, which sense when the driver rapidly removes his foot from the accelerator. PSM immediately primes the hydraulics of the braking system and moves the pads closer to the disc in an effort to reduce stopping distance. These upgrades have necessitated wheels that are a half-inch wider than in previous years and have been redesigned.

The redesign continues to the front and rear of the Boxster as well, showing up in new head- and taillamp configurations as well as new front and rear bumpers. While halogens are retained up front, integrated turn indicators are now standard, and LEDs grace the rear. An optional Lights Package will upgrade the front to dynamic cornering bi-xenon headlamps with LED running lights instead of the standard fog lamps. The headlamps are in a distinctive teardrop shape, presumably to further distinguish the Boxster from the Carrera, while the foglamps and grille have become slightly more mecha versus the orga of the rest of the design. The rear LEDs do a good job of blending into the distinctively Boxster rear fenders.

What's your take on the 2009 Porsche Boxster?

Users ranked 2009 Porsche Boxster against other cars which they drove/owned. Each ranking was based on 9 categories. Here is the summary of top rankings.

Have you driven a 2009 Porsche Boxster?
Rank This Car

Free Listing Extension Appears To Not Be Working

On my listing, I received option to extend listing for free for an additional 30 days, but every time I click "ok", it remains at original date (30 days - instead of 60 days.)

My Porsche Boxter On Sale