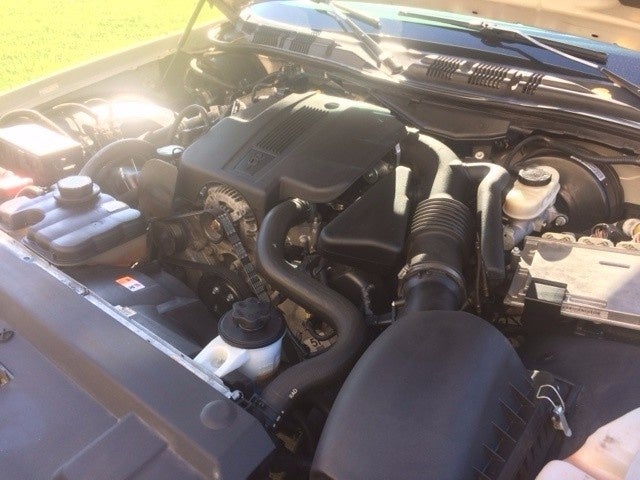 With the largest wheelbase in its class, the 2009 Mercury Grand Marquis offers plenty of spacious cabin room for six adults, along with an SUV-size trunk.

Out of touch and out of date, the 2009 Grand Marquis lacks the more refined handling and better fuel efficiency of more modern premium full-size sedans.

A relic from the 1970s, the 2009 Grand Marquis handles like a small yacht and measures nearly as long and wide as one. Its old-style size and look likely appeal to an older generation looking for effortless driving, a cushy ride, and a luxury-lined interior. When compared to more updated sedans, such as the Impala and its sister Sable, all the V8 power in the world can't disguise its old platform and unwieldy maneuverability.

The 2009 Mercury Grand Marquis fits like a comfortable pair of old slippers, so why upgrade to more expensive Crocs? Clearly this is Mercury's way of thinking, as this rear-wheel-drive, full-size sedan, essentially a dressed-up version of every police department's favorite Crown Vic, hasn't seen a refresh since 2003. Though it comes well-equipped and offers a spacious, luxurious cabin and powerful V8 engine, it rides on an old-school platform and lacks many of the modern features and options found in equally upscale large sedans.

For 2009, the Grand Marquis drops the GS and offers only one trim – the LS. New features include standard traction control and front-side airbags. Mostly relegated to the commercial and fleet market, the '09 Grand Marquis costs less than the competition, but features an old-school design that lacks the refinement and fuel economy of more streamlined large sedans. The Mercury Sable, for instance, offers more trunk space, headroom, and standard features, as well as better power and fuel efficiency with its modern V6 engine. The '09 Grand Marquis seats up to six adults and comes backed by a powerful V8 engine. It rides on standard 16-inch wheels with the option to upgrade to 17-inchers. 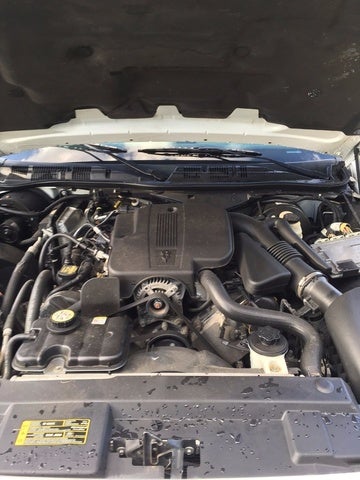 Under the hood sit a 16-valve, 224-hp, 4.6-liter V8 engine and a four-speed automatic. Torque hits 275 lb-ft at 4,000 RPM. With a nod to the modern age, a flex-fuel version is E85-compatible. While not winning any speed contests (one owner clocks 0-60 in just under 10 seconds), the V8 adequately powers the large sedan from point A to point B. One test drive finds the four-speed slow to downshift, making the sedan work hard to pass at highway speeds.

Perhaps one of the few surviving land yachts on the road, the '09 Grand Marquis lacks the refined handling dynamics of its Mercury Sable cousin and many of its updated competitors, such as the Chevy Impala and Buick Lucerne. The last car to be built with a body-on-frame setup, the Grand Marquis lumbers awkwardly in city driving, with an unwieldy 40.3-ft turning circle. This makes parking or tight cornering an interesting challenge. One owner finds the standard 16-inch wheels too small for the sedan's large size, causing body lean in turns. 17-inch wheels are optional.

The short- and long-arm front and solid live axle rear suspension floats along, providing a cushy and comfortable ride, but little interaction between driver and road. A load-leveling rear air suspension adjusts when carrying heavier loads in order to maintain body control in turns. The variable assist speed-sensitive power steering switches from numb to “rubbery,” according to one critic, always feeling vague and lacking any feedback. Wind and road noise rarely intrude, however, producing an isolated, quiet ride.

The 2009 Grand Marquis easily fits six passengers in its roomy interior, which rests on a class-leading 114-inch wheelbase. However, test drivers warn that the middle passenger in both front and back rows will find him- or herself sitting on the narrow hump, an uncomfortable prospect on longer trips. Legroom measures 41.6 inches up front and 38 in the back, while generous hip room measures 57 and 56 inches respectively, thanks to the Grand Marquis being the widest large sedan on the market. The result is a roomy and comfortable cabin for adults of all sizes.

Wrapped in leather, the seats feel soft and welcoming, but the flat bench setup in both rows lacks any good support. However, 6-way power front seats are standard, featuring both height and lumbar adjustments. Power-adjustable pedals are available as an option, along with heated front seats. The front bench split-folds in a 40/20/40 configuration, but the rear seat does not fold. In its place is a fold-down armrest that doubles as a storage compartment. Controls are simple to use, but some lie just out of easy reach for the driver, causing some distraction. Wheel-mounted audio controls can be added. The steering wheel tilts, but does not telescope.

Rivaling the capacity of some compact SUVs, the cavernous trunk holds 21 cubic feet of storage, with a deep center well. The trunk lid also lifts high for wide loading access. Interior storage, however, remains at a minimum. Though bathed in leather and wood trim, the luxurious cabin of the '09 Grand Marquis features too many hard plastics that feel low-grade to both critics and a few owners. It hasn't been updated in six years, and it's starting to show, particularly when compared to the more modern and swanky Mercury Sable.

Standard features include power windows, locks, and mirrors, remote and keypad entry, cruise control, a garage remote, a trip computer, front and rear cupholders, and a 4-speaker sound system with a CD player. An optional combo 6-CD changer and cassette player are offered. (Yes, all you aging baby boomers who kept your cassettes from college, you can rejoice!) The latter is about the only concession to modern technology, since you won't find anything like a satellite radio, an MP3 input jack, a navigation system, or Bluetooth on the options list.

The Grand Marquis prides itself on winning five-star crash test ratings in all NHTSA categories for 13 years running. This despite the fact that it lacks stability control and side rear curtain airbags, even as options. It does come standard with four-wheel disc and ABS brakes, supplemented by electronic brakeforce distribution. Dual-stage front airbags now get paired with side airbags for extra protection and feature passenger deactivation. Traction control is also standard, helped by a choice of either 16- or optional 17-inch wheels. A tire monitor keeps an eye on tire pressure.

The '09 Grand Marquis has been around for a long time, and there's a good reason for it. According to several owner reviews, the virtually indestructible large sedan lasts forever, unless being used in a Blues Brothers movie. Drivers find its V8 engine plenty powerful and its ride smooth and luxurious. At a cost comparable to many midsize sedans, the '09 Grand Marquis represents a good value for the money. Contrary to what professional reviewers report, many owners say the fuel economy averages in the mid-20s. On the other hand, a fair share of owners admit that the sedan can be a gas guzzler around town.

As this sedan sees most of its sales going to fleet buyers, no CarGurus owners have yet given their review of the '09 Grand Marquis. Since it has remained virtually unchanged for nearly 10 years now, CarGurus reviews from previous years provide a good enough indication of the car's merits and drawbacks. Highlights include its mid-20s mpg, smooth ride, and confident power. The major lowlight focuses on the outdated looks and handling of this land yacht from another century.

What's your take on the 2009 Mercury Grand Marquis?

Guru97FYR Best car I've ever owned (incl. 3 MB's, Jags, Grand Wagoneers, Lincoln & many Cad's.) Always 20 mpg in town. It will coast a country mile (like free-wheeling -- remember??!) Can go around corners 'way faster than I would ever want to; what is this BS about "poor handling"?? -- ever hear about safety? .. or "taking your mother-in-law to Church on Sunday"?

Have you driven a 2009 Mercury Grand Marquis?
Rank This Car

The switch inside car would only blow on high. Now its went blow it all us at switch or something else???

A similar question was asked on this site 6+ years ago but the discussion solved nothing. Apparently this is a common problem for Grand Marquis and Crown vics. I have a 2009 Mercury Grand Marquis....

Looking at a car, guy says the air works and then the heat stopped one winter and just blows out cold air...is it the actuator or something else, and what does it take to fix it. And can the proble...

My 2009 mercury grand marquis ultimate edition has a tapping sound on start up then as it idles down it goes away for the most part. I've tried looking up anything of relevance to this and have com...

I Can’t Get Replies

I’m trying to to sell my car. I have over 50 massage requests. I have replied to them and I haven’t gotten a single reply back. What going on?