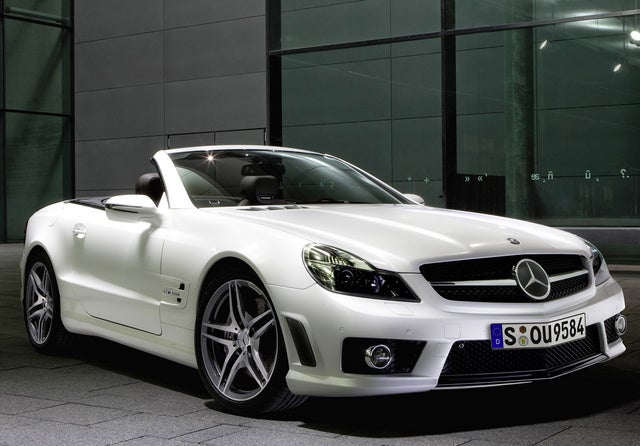 The line has undergone refreshing for the 2009 model year. A new single-bar grill is flanked by L-shaped headlamps. The front end has a more chiseled, edgy look. Side-fender “air gills” behind the front wheels add a nod to the Gullwing past and work as functional engine-compartment hot-air extractors. Other external changes, like larger side mirrors and trapezoidal exhaust tips, are minor. The interiors are customizable with a number of leather and wood trim combinations. AMG versions have also undergone minor external freshening, including a lower, more aggressive front air intake, grille and headlight revisions, special side skirts, and a new rear fascia.

For power – a key consideration in this class – Mercedes has mixed and matched V8s and V12s, with the former naturally aspirated and the latter twin-turbocharged. The V8s are mated to seven-speed automatics, while the more torque-rich V12s are paired with five-speed automatics.

The SL550 – the most popular SL model – arrives with a 5.5-liter naturally aspirated V8 that produces 382 hp. Backed by a seven-speed automatic transmission, the SL550 can trip across the 0-60 jump in 5.3 seconds, according to Mercedes’ conservative numbers, though an independent review cites 4.9 seconds.

The seven-speed automatic gets enthusiastic reviews for its indiscernible shifting. Its manual-shift mode works via a shift lever or steering-wheel paddles.

Moving up a notch in the SL performance hierarchy to the SL600 brings a twin-turbocharged 5.5-liter V12 with 510 hp and 612 lb-ft torque. This powerhouse is capable of launching the hefty roadster across the 0-60 jump in 4.4 seconds, according to Mercedes. To handle the increased torque, Mercedes employs a five-speed automatic transmission.

At the higher levels of SL performance, one finds the limited-production AMG-tuned roadsters with their handbuilt engines. The high-performance SL63 AMG is equipped with a 6.2-liter naturally aspirated V8 that spins out 518 hp and 465 lb-ft torque through a seven-speed AMG-modified automatic transmission. AMG rates the 0-60 jump at 4.3 seconds. AMG engineers modified the seven-speed Mercedes transmission by replacing the torque converter with a wet clutch. Five rotary-dialed shifting modes are incorporated in this transmission: comfort, sport, sport plus, manual (using either the shift lever or steering-wheel paddles), and launch control. In sport plus mode, shifts are faster than sport mode and more revs are added to the downshifts. The transmission is the closest thing Mercedes has to an automatic manual transmission – Audi and BMW are using twin clutch, twin-shaft gearboxes, which are heavier.

The SL65 AMG, the pinnacle of SL performance, is powered by a twin-turbocharged 6.0-liter V12 that rips out 604 hp and an amazing 738 lb-ft of torque. Flowing through a five-speed automatic, the SL65 blasts across the 0-60 jump in 4.2 seconds, according to AMG, though one independent review gives 3.9 seconds. Several reviews, however, did point to issues of turbo-lag on the turbocharged models.

Handling throughout the SL class is worthy of its impeccable sports-car heritage. All models feature Mercedes' remarkable Active Body Control System (ABC) that employs airsprings, driver-controlled dampers, and solid chassis construction. Reviewers were all impressed with the flat cornering and comfortable cruising afforded by the SL line-up. The AMG versions have tighter, performance-tuned suspensions, but nothing approaching all-out race-car harshness.

Interiors are opulent, as would be expected in this price range. Occupants are treated to yards of soft leather, burnished wood finishes, and tasteful chrome trim. Seats are great, with one reviewer claiming he could fall asleep in them, which could be dangerous in an AMG version!

The SL cockpit includes plenty of creature comforts, including the Airscarf feature borrowed from the SLK line – fans located in the headrests blow warm air down your neck to extend the top-down driving season. Reviewers report the roadster is quiet enough for normal-volume conversations at 100 mph with the top down - putting it down takes only 16 seconds, as the two-piece hardtop folds away in the 10.2-cubic-foot trunk, reducing it to 7.2 cubic feet.

Brakes on all models are powerful and fade resistant – they increase in size and power as you ascend the SL performance ladder. Steering is managed by a new variable-ratio system, which activates more the further the wheel is turned. Reviewers report that although steering feel and feedback are not on the Porsche level, they're more than adequate for an ultra-luxury touring roadster.

Mercedes claims that the solid-roof roadster is “the world’s safest convertible.” Objectively, the SL has received top “good” ratings in all IIHS tests and a four-star frontal rating for the driver and five stars for all other NHTSA tests. Safety features include ABS antilock brakes, a sophisticated electronic stability system, a full compliment of airbags, including a driver’s knee airbag, popup roll bars, and active head restraints.

The SL Class has been and continues to be one of the most prestigious and gratifying luxury performance sports cars.

What's your take on the 2009 Mercedes-Benz SL-Class?

Have you driven a 2009 Mercedes-Benz SL-Class?
Rank This Car

Use Of Battery Tenders?

Does putting a battery tender on only the starter circuit battery also charge the consumables battery?

Add My Phone Number To Ad?

How do I make my phone number appear in my Selling ad?

I have never used your program nor anyone else's to sale a vehicle. That being said I am selling this vehicle for my CEO at IST Management Services. I am the Controller and I don't have regular acc...