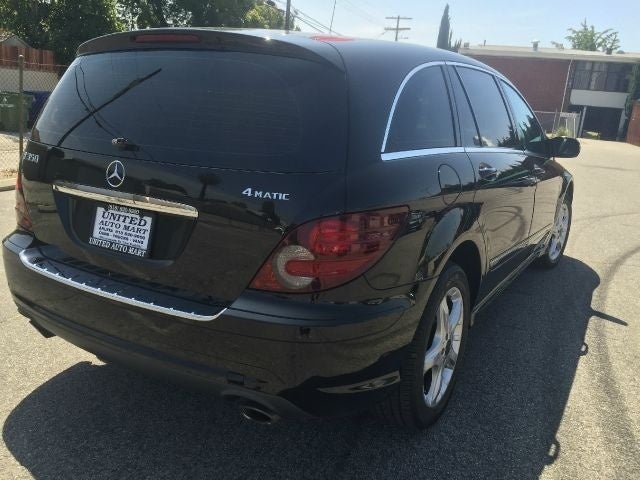 Mercedes-Benz streamlines the R-Class lineup for 2009 and adds a few new features to the standard equipment list for R-Class models. For starters, the '09 R-Class lineup consists of just two vehicles - the R350 4Matic and the R320 BlueTEC. The R350 now comes only with Mercedes' 4Matic full-time all-wheel-drive system. The rear-drive R350, available the previous year, was dropped from the lineup for '09.

In addition, Mercedes replaces the previous year's diesel-powered R320 CDI with the new R320 BlueTEC. It features the automaker's turbocharged 210-hp, 3.0-liter BlueTEC clean-diesel V6 engine, which delivers impressive torque and a good 0-60-mph time. Unlike the previous R-Class diesel-powered trim, Mercedes will offer the '09 R320 for sale in all 50 states. (Due to emissions problems, the R320 CDI was not offered for sale in certain states.) Mercedes notes that the new R320 BlueTEC achieves better gas mileage than some hybrid SUVs, getting up to 24 mpg on the highway, and can travel more than 600 miles on a single tank of gas. The engine runs on ultra-low-sulfur diesel or B5 biodiesel fuel.

For both trims, the engine links to a seven-speed automatic transmission, which provides improved fuel efficiency (when compared to earlier versions of the transmission), especially when cruising in the two overdrive gears. In addition, the transmission continually monitors engine and road inputs to select the best gear for the smoothest acceleration possible. Drivers can use the transmission's Touch Shift feature and paddle shifters mounted on the steering wheel to manually shift the transmission.

New standard features for both trims include a glass panel sunroof. Mercedes continues to offer a two-panel panorama sunroof as an option. In addition, Mercedes has updated the COMAND (Cockpit Management and Navigation Device) entertainment and information system, which has a new multimedia head unit that makes it easier for drivers to control the vehicle's audio and video systems, as well as the hand's-free phone calling and optional navigation systems.

Mercedes also adds the Pre-Safe occupant-protection system as a standard feature. If the Pre-Safe system detects a potential accident, it automatically tightens seat belts, adjusts seats to optimal positions, and closes the windows and sunroof to protect occupants.

What's your take on the 2009 Mercedes-Benz R-Class?

Have you driven a 2009 Mercedes-Benz R-Class?
Rank This Car

Why Is Car Leaning On The Right Side

why is the car leaning on the right side