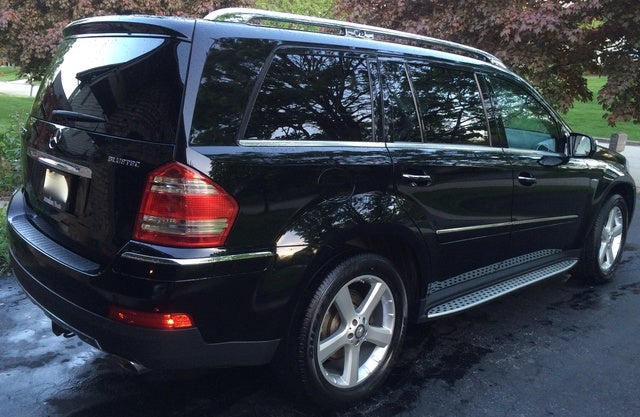 With the addition of a new BlueTEC engine for the GL320 trim, the Mercedes-Benz GL-Class becomes more fuel efficient and environmentally friendly for 2009 and continues to offer an impressive mixture of powerful engines, luxury interior amenities, and innovative safety technologies.

As with many larger SUVs these days, the 2009 GL-Class's fuel efficiency remains a concern for many drivers, despite the addition of a new fuel-efficient diesel engine, and some owners have reported reliability and quality control issues with the GL-Class.

The 2009 Mercedes-Benz appeals to a certain type of driver, one who requires the spaciousness of a roomy cabin and third-row seating, combined with the upscale amenities typical of a Mercedes. However, a few key issues, such as the lack of crash test safety ratings and questionable reliability, based on comments from current owners as well as historical data compiled by Consumer Reports, should make prospective buyers evaluate their needs and the vehicle carefully before making a buying decision.

The Mercedes-Benz GL-Class of full-size SUVs gets greener for 2009, thanks to the GL320, which now comes equipped with a next-generation 3.0-liter BlueTEC turbocharged V6 diesel engine. Because of concerns about emissions, previous versions of the diesel-powered GL320 were barred from sale in a number of states, including California, New York, and Pennsylvania. But Mercedes resolved the emissions problem with its newest diesel engine, and now offers the '09 GL320 BlueTEC SUV for sale in all 50 states.

The GL-Class also includes the GL450 and GL550 trims, which change little for 2009. The GL-Class appeals to drivers who want the functionality of a full-size SUV combined with the upscale luxury amenities expected from a Mercedes. All GL-Class SUVs feature 4Matic four-wheel drive and seat seven passengers in three rows. Despite their size, GL-Class SUVs offer agile handling and aggressive performance, as well as attractive styling. 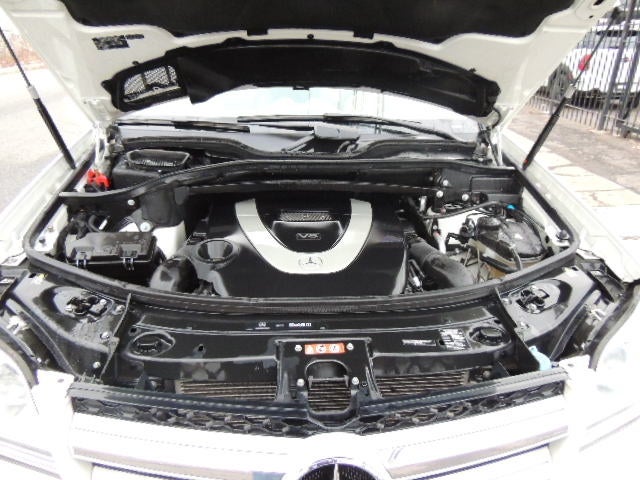 Each of the three GL trims comes equipped with a different engine. At the entry-level position, the GL320's new BlueTEC V6 turbodiesel engine produces 210 hp and 398 lb-ft of torque at 1,600 rpm, resulting in good acceleration and a spirited ride around town. However, performance suffers a bit at passing speeds, according to reviewers. On the other hand, the GL320 manages about 17/23 city/highway mpg, which are respectable numbers for a full-size SUV.

The engine links to a seven-speed automatic transmission, which monitors factors such as engine and vehicle speed and shifts into the best gear to ensure a smooth ride and reduce wear on the transmission. The transmission's two overdrive gears help conserve fuel at highway speeds. Because of its fuel efficiency and large fuel tank, the GL320 can travel more than 600 miles on a single tank of fuel. The engine runs on either ultra-low-sulfur diesel fuel or B5 biodiesel fuel.

Moving up the line, a 335-hp, 4.6-liter V8 drives the GL450. The V8 develops an impressive 339 lb-ft of torque at low engine speeds (2,700 to 5,000 rpm) for plenty of power when towing heavy loads or accelerating off the mark. Designed for quiet and efficient performance, with lightweight components throughout, the V8 manages 13/18 mpg.

Drivers who require maximum power for heavy hauling or towing jobs can opt for the GL550, powered by a hefty 382-hp, 5.5-liter V8. Developing 75 percent of peak torque at just 1,000 rpm, the V8 drives the big SUV from 0 to 60 in 6.4 seconds. The lightweight cast aluminum engine was designed for both performance and durability, as well as a smooth delivery of power. It posts mileage ratings of 13/17.

The V8 engines in both the GL450 and GL550 also link to a seven-speed automatic transmission, and come equipped with 4Matic all-wheel-drive. The AWD system includes a four-wheel electronic traction control (4-ETS) system, which reduces engine power and applies individual brakes as needed when it detects wheel slippage to help drivers maintain control of the vehicle. Both gas-powered engines require premium fuel.

All GL-Class trims are rated Class IV towing vehicles and can tow up to 7,500 pounds, when equipped with an optional trailer hitch.

The GL-Class's unibody design, instead of the body-and-frame design typical of many trucks, results in a solid feel and car-like handling, despite the SUVs' 5,313-pound curb weight. The GL-Class rides on an independent front and rear suspension with double wishbones and a stability bar in the front and a four-arm multilink configuration with antisquat geometry and a stabilizer bar in the rear. This results in agile, surefooted handling and a smooth ride over all types of roads and terrain.

All trims also include the Airmatic Adaptive Variable Suspension system, which can adjust ride height by up to 3 inches. Speed-sensitive, power-assisted rack-and-pinion steering helps ensure a responsive feel and good control.

Interior storage spaces include bins in the front center console and overhead console, as well as six cupholders, two bottle holders, and a storage compartment underneath the cargo floor.

Despite its pedigree as the flagship Mercedes SUV, the GL-Class does not come equipped with such standard features as interior leather trim (optional on all three trims) or leather seats (standard only on the GL550, and optional on the other two trims). Hand-polished genuine wood trim on the doors and center floor console, however, does come standard on all three trims (brown birdseye maple for the GL320 and GL450, burl walnut for the GL550, which also gets wood trim on the steering wheel). Other standard equipment across the line includes heated power-adjustable front seats, a leather-wrapped multifunction steering wheel, automatic climate control, and a power glass sunroof with a manual sunshade.

For entertainment, the GL320 and GL450 come equipped with an eight-speaker, 80-watt AM/FM audio system with speed-sensitive volume, an MP3 connection, and a 6-CD changer. For the GL550, the audio system upgrades to an 11-speaker, 610-watt Harman/Kardon configuration with six months of Sirius satellite radio.

The GL550 also comes standard with Mercedes' updated COMAND (Cockpit Management and Data) entertainment and navigation system, which includes a 40-gigabyte hard drive, a GPS navigation system with voice activation and a 6.5-inch screen, a preloaded restaurant guide, and real-time traffic updates. Drivers can add the system as an option on the other two trims.

Other options include a heated steering wheel, a rear-seat DVD entertainment system with two 8-inch flat-panel LCD screens on the backs of each front seat, and a rear-view wide-angle camera, which displays on the COMAND screen on the dashboard.

While the GL-Class offers more third-row legroom than the Cadillac Escalade, it offers less cargo space with the third row of seats in place (14.3 compared to the Escalade's 16.9 cubic feet). With the third row folded down, cargo space expands to
43.8 cubic feet, and 83.3 cubic feet both the second and third rows folded down. By comparison, the Escalade offers 108.9 cubic feet with the second and third rows folded down. Power folding third-row seats make it easy to expand the GL's cargo space. In addition, the GL550 comes standard with a power liftgate, which drivers can add as an option on the other two trims.

The GL-Class goes to great lengths to protect its passengers. Standard safety features include an extensive airbag system with a total of nine airbags throughout the cabin. In addition to front dual-stage airbags, the GL-Class comes equipped with a driver's-side knee airbag, side-impact airbags, and window curtain airbags for all three rows.

All trims GL-Class trims now come standard with the Pre-Safe system, which automatically closes the windows, adjusts seat belts, and positions the front passenger seat for optimal airbag deployment if it detects a potential emergency situation. Other standard safety features include antilock brakes, an electronic stability system, and hill assist, which prevents rollback when parking on an incline.

A Trailer Stability Assist system uses the electronic stability program's sensors to monitor for oscillations when towing a trailer and applies brakes as needed to stabilize the vehicle. In addition, drivers can add optional safety features like the Parktronic system, which employs ultrasonic sensors in the bumpers to detect nearby objects and alerts the driver with audible and illuminated alerts.

Neither the National Highway Safety Traffic Administration nor the Insurance Institute for Highway Safety have conducted crash tests for the the GL-Class, so those ratings are unavailable to drivers.

While most owners like the way the GL-Class rides and handles, and enjoy its upscale amenities, a number of owners have reported reliability, quality control, and customer service issues with the SUV and its manufacturer. Some also find the GL-Class's fit and finish lacking, and many compare its styling with the lower-priced Mercedes M-Class. On the plus side, owners give the GL-Class good marks for its strong-performing engines, its quiet cabin, its towing capacity, and its comfortable third-row seat.

CarGurus owners find fault with the fuel economy of the GL-Class, which remains its primary drawback. However, CarGurus owners like the GL-Class's smooth-shifting seven-speed transmission, voice-activated navigation system, and luxury amenities.

What's your take on the 2009 Mercedes-Benz GL-Class?

Have you driven a 2009 Mercedes-Benz GL-Class?
Rank This Car

Gl450 Won't Start But Lights And Ac And Radio Works..

Tried both keys but to no avail. Could that be Ignition switch

greetings, I have a 2009 Mercedes Gl 450 and I have to change and locate the coil number 8 and I can't find the diagram that locates me, can someone assist me

What Should I Do If I Want To Buy One Of The Advertised Cars?

I see a car I like and would like to buy it. How do I go about buying the car?

I Can't Click On Car Gurus Listings And Have Them Zoom In And Open Up Any M...

For some reason NOTHING OPENS FOR CLOSER VIEWING when I click on Car Gurus cars. How can I get your website to work again. I am trying to buy a car this weekend an this is very aggravating.

How Many Miles Do I Have From The Time My Brake Wear Warning Light Goes On ...

I am on vacation in Italy with my American spec mb gl 450. I am carrying a full load with weight and 5 passengers. My brake wear indicator went on and we have about 200 km to get back home. Am I ...