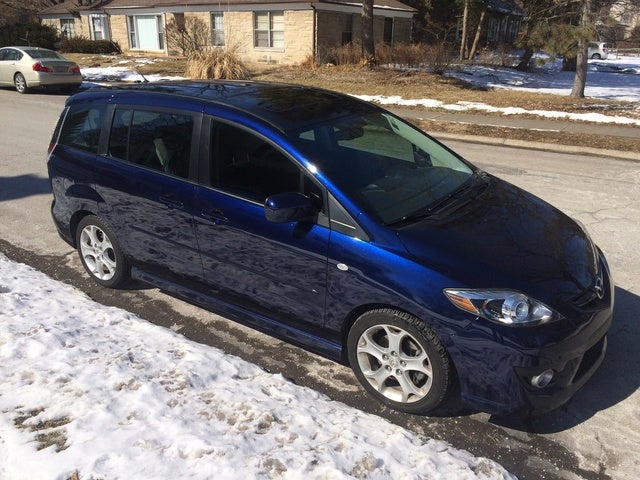 A lack of horsepower and third-row roominess keep the ’09 MAZDA5 out of contention for larger families, who demand plenty of space and power. 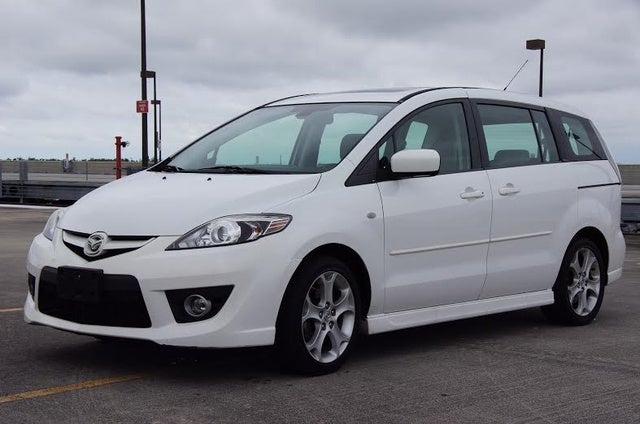 If cavernous room, a big engine, and posh elegance are a priority, stay clear of the 2009 MAZDA5 minivan. If sensible gas mileage, sporty handling, a smooth ride, and adequate interior storage are more appealing, the MAZDA5 is a perfect choice.

The 2009 MAZDA5 puts the “mini” back into the minivan, in a good way. This versatile mini, unchanged since a significant re-design in ’08, boasts better-than-adequate gas mileage, decent room, and a pile of standard comfort, convenience, and appearance features.

The ’09 MAZDA5 is a front-wheel-drive, five-door, six-passenger wagon that’s available in three trim levels: Sport, Touring, and top-shelf Grand Touring. Nimble and maneuverable, the MAZDA5 is perfect for families with small children who don’t need the bulk or the expense of some of the larger minivans out there. This is a van for those who have a down-to-earth sense of what they want.

Admittedly, the MAZDA5’s third-row seat is decidedly uncomfortable for adults, and the standard inline-four (I4) engine isn’t exactly powered for the Italian Grand Prix. However, the MAZDA5 is positioned perfectly to appeal to those who may be considering a crossover, but don’t wish to pay the price – yet.

Despite its small size, the ’09 MAZDA5 is a sporty minivan that’s easy and downright fun to drive, and it does offer some 71 cubic feet of cargo space with the rear seats folded down. It’s well-mannered, priced right, and, to top it all off, is a “Recommended Pick” by Consumer Guide Auto. 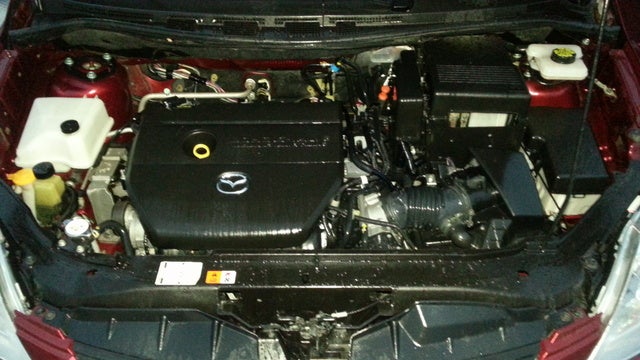 Optional for the ’09 MAZDA5 Sport, and standard with the Touring and Grand Touring trims, is a five speed auto-manual transmission that combines with the 2.3-liter I4 to get an EPA-estimated 21/27.

Professional reviewers find the 2.3-liter I4 peppy enough, with each transmission mentioned as smooth and very capable. Some reviewers note, however, that the engine is a bit loud when throttling up and that it has a distracting throb when idling. At cruising speed, reviewers find the I4 performs well. 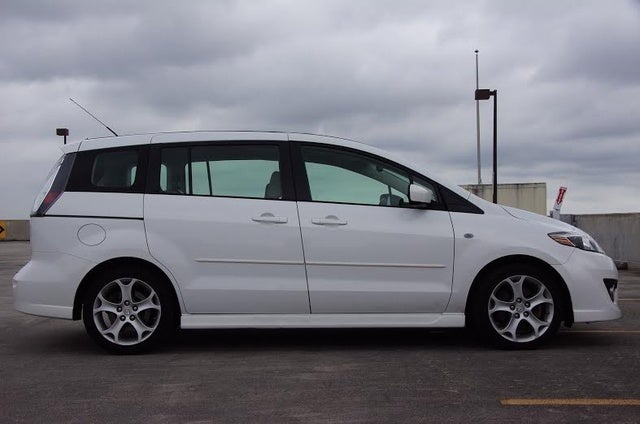 All MAZDA5 trims roll on 17-inch alloy wheels mounted with all-season radials. No other wheel sizes are available.

Both professional reviewers and owners find the ’09 MAZDA5 provides surprisingly nimble handling despite its somewhat tall stance. The tires give a firm grip to the road, and body-lean is described as “modest” in even the sharpest turns. Ride quality is described as firm but very pleasant, though some bumping is noticeable over uneven pavement. The MAZDA5 is also noted by nearly all professional reviewers as well-mannered and stable over wavy road surfaces.

As well, virtually all reviewers find the Mazda to have excellent straight-line ability when encountering strong crosswinds and firm, responsive steering on windy back roads. Ventilated four-wheel disc brakes provide sure stopping ability when coming to a quick halt. 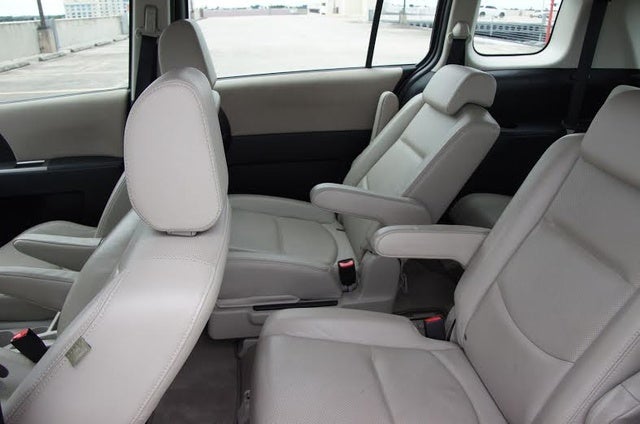 The 2009 MAZDA5 doesn’t skimp on comfort, convenience, or appearance features, though a few reviewers have noted some sub-standard interior materials. By and large, reviewers find the cabin well designed and well-built, perfectly in keeping with its price and functionality.

Options available for the ’09 MAZDA5 include the five-speed auto-manual transmission and a 6-CD changer for the Sport trim, Sirius/XM satellite radio, remote starting, and an auto dimming rearview mirror with a Homelink automatic garage door opener. For the Grand Touring trim only, there’s an available voice-activated DVD navigation system that reviewers note is finally mounted in the right location - in the dash, instead of above it. 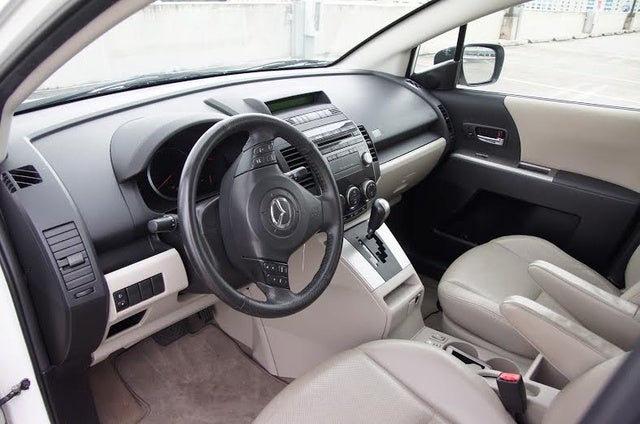 The 2009 MAZDA5 has not been tested by either the National Traffic and Highway Safety Administration (NHTSA) or the Insurance Institute for Highway Safety (IIHS).

Professional reviewers and owners, though appreciative of what the ’09 MAZDA5 does offer as far as standard safety features, note that the addition of standard stability control and traction control might be something Mazda ought to consider in the very near future. 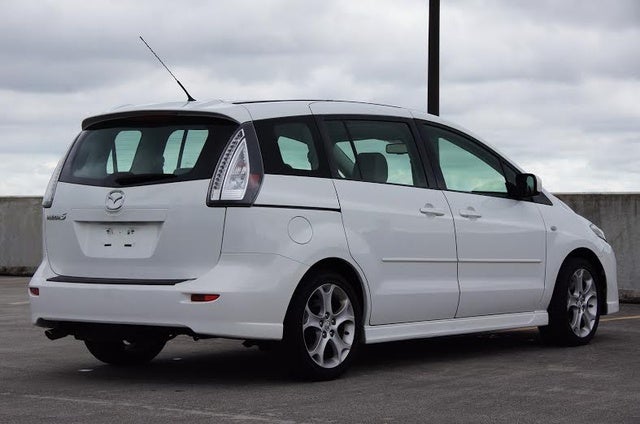 Roominess, price, ride, and handling characteristics all are noted by owners as particularly appealing about the 2009 MAZDA5.

However, roominess is in the eye of the beholder, as many owners complain that the third-row seats in the MAZDA5 are suitable only for children, and small children at that. As well, a lack of cargo room behind the third row has earned the displeasure of a couple of owners.

The lack of auto-locking doors, larger armrests, lackluster cabin materials, a weak air-conditioning system, and a distinct need for a bit more horsepower are among other owner complaints about the ’09 MAZDA5.

On the other hand, virtually all owners rave about the MAZDA5’s gas mileage, dual sliding rear doors, standard features, driving dynamics, sporty styling, driving fun - especially with the manual-auto transmission - and build quality. Even the 2009 MAZDA5’s exterior paint job came in for kudos from at least one owner.

Have you driven a 2009 Mazda MAZDA5?
Rank This Car

Is It Also My Broken Key Fob?

My fob is broken which has been proven to be the problem I had with the car not starting.and with that came a new fuel pump a new water transfer unit. Thermostat. Did a DIY repair on it and it br...

17 views with 8 answers (last answer about a year ago)

How Do I Know If My Message Is Get Through,sent Three Messages And Have Not...

Looking To Replace Bent Factory Rims On An '09 Mazda 5 With Custom Steel Ri...

Looking to replace bent factory rims on an '09 Mazda 5 with steel pressed rims and chrome rings/small hubcaps. Any suggestions where to look for parts?

What Maintenace Should Be Done At 75,000 Miles