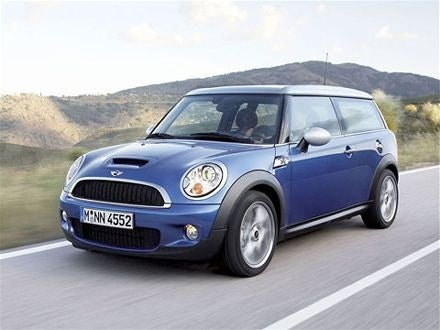 For its second year on the market, the three-door front-wheel-drive wagon version of the petite Cooper offers a lot more cargo versatility and enough rear legroom to actually fit two adults in the back seat on short drives. The 2009 Cooper Clubman appeals to those who love the MINI's retro looks, but want a bit more practicality.

For 2009, the Clubman, like the Cooper, gets a new high-performance John Cooper Works trim. This joins the Base and sporty S versions. Though it uses the same 1.6 found in the S, it includes a bigger turbocharger and special exhaust tuning to achieve 207 hp and 192 lb-ft of torque. Paired with a 6-speed short-throw manual transmission, it also features an overboost switch that boosts torque to 208 lb-ft. It adds larger Brembo brakes and stiffer springs and shocks to the already sport-tuned mechanics of the S. Both performance trims ride on 16-inch wheels with run-flat tires, while the Base comes standard with 15-inch wheels and all-season tires.

Base trims are powered by a naturally aspirated 1.6-liter inline-four, delivering 120 hp and 118 lb-ft of torque, while the turbo 1.6 in the S ups those numbers to 175 and 177. Both Base and S can be equipped with a 6-speed manual or 6-speed automatic with paddle shifters. While the S hits 0-60 in 7 seconds (slightly slower than the Cooper version because of the Clubman's extra size), the John Cooper Works reduces that number to the high 6s. European versions feature engine idle cutoff and regenerative braking, along with a diesel engine, for improved fuel economy. All trims include 4-wheel ABS brakes with brake assist and hill start control. Dual front-side and side curtain airbags for all rows are standard. New this year for all trims, dynamic stability control incorporates traction control for improved handling on slick surfaces.

The 2009 Cooper Clubman seats four in two rows. At 9.5 inches bigger in length and 3 inches longer in the wheelbase, it adds 3 inches of rear legroom (now 32 inches) and 60% more cargo room to the Cooper. Trunk capacity starts at 9 cubic feet and expands to 32.6 with the rear seats down. Rear seats split-fold 50/50, but do not fold flat. Entry and exit to the rear seats can be tight, as they do not have their own door. The Clubman features only two doors and one reverse-hinged narrow rear passenger door that opens only in conjunction with the front door. Cargo access is via a barn-door setup in the back, each opening independently and each with its own window wiper. Unfortunately, some reviews mention that the two-tone trim around these doors actually creates a major blind spot to the rear.

The 2009 Cooper Clubman Base trim offers tilt and telescopic steering, full power accessories, a CD/MP3 player, and leatherette upholstery and trim. The glovebox also offers cooled storage for beverages. The S and John Cooper Works are essentially the same, but add bolstered sport seats and foglights. All Cooper Clubmans can be customized with a long list of both factory and dealer-installed options.

What's your take on the 2009 MINI Cooper Clubman?

DIY Disabled Timing destroyed engine at 40k, fought for a new engine @ $10k and that engine died at another 6k in miles. Fun to drive, expensive to fix when they go wrong. never again

Have you driven a 2009 MINI Cooper Clubman?
Rank This Car

Why Can't I Find My Car That I Just Listed When Searching?

Timing Is Wrong In The Mini

So I just bought a used 2009 Mini Cooper. I had to replace a head gasket . As we were taking the head off the timing chain guide rail broke and had to fix it. So unfortunately due to my best effort...

I have a hope coming out of the top left of valve cover. Where does this go to?

I am trying to find the diversity module/antenna amplifier in my daughter's cooper clubman. Please help me if you know where it is! Thank you!

Is The Dealer Prep Charge Valid?

The dealership I encountered had a dealership prep charge of $695 for every car sold . Is it valid or illegal. Seems like an extra charge not included in the advertised price.