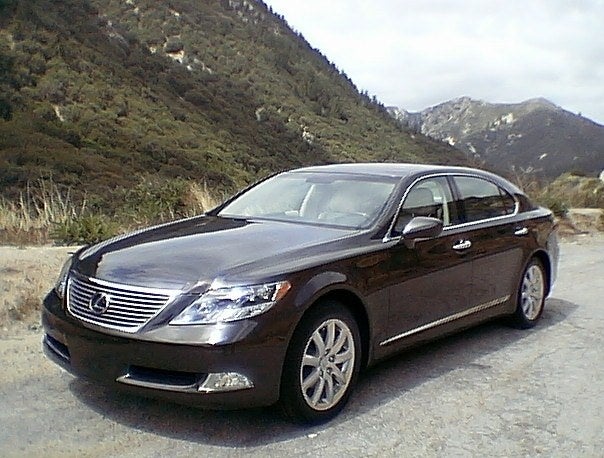 The supercar of the future might look a little like the 2009 LS 600h L, with a whole lot of punch coming from a not-so-big hybrid engine.

Trunk space is minimal in the 2009 LS 600h L, and the premium leather seats wouldn’t be a good place to stash your golf bag and cleats.

Atop the Lexus lineup, the 2009 LS 600h L sits comfortably with its decadent interior design, gadgets a-plenty, and a unique engine that challenges the assumptions about hybrids. It may not have the most raw energy and thrill in its category of a flagship sedan, but Lexus hopes that you'll forget the road with a reclining backseat with an automatic massager.

To compete for top-notch clientele looking for V12 engines, Lexus took a creative and clever approach. What resulted was a 5.0-liter V8 hybrid engine that when combined with two electric motors levels the playing field with power and acceleration while keeping emissions and consumption at a reasonable level.

As the flagship sedan for Lexus, the 2009 LS 600h L is jam-packed full of features, technologies, and comforts that create a very high-roller appeal. Its pricetag of over a hundred thousand dollars helps, too. The "hybrid" term may be a misnomer of sorts, and it cannot be compared to other gas-savers, but it does offer an environmentally friendlier alternative to a 12-cylinder supercar.

With the Lexus name comes a reputation for comfort, luxury, and the reliable backing of Toyota, and there's no exception here. Only time will tell of the LS 600h L's longevity, with the trim having been introduced in 2008, and no major changes for the 2009 release.

The 2009 LS 600h L is the first vehicle with a full V8 hybrid powertrain. Instead of the standard 4.6-liter V8 engine in its non-hybrid counterpart, the LS 600h L gets 5.0 liters and is coupled with two electric drive motors. And when it’s all said and done, this powertrain can generate 438 hp. The engine itself creates 389 hp and deals out 385 lb-ft of torque at 4,000 RPM.

Even though the LS 600h L weighs 500 pounds more than its single-engined cousin, it accelerates very impressively, with a 0-60 time of 5.5 seconds. The all-wheel-drive transmission is equipped with limited-slip differential technology, where in-car computers can adjust front and rear axle power for better grip on different road surfaces.

If you are considering paying over a hundred thousand dollars for a vehicle, you should demand that the ride feels like you are driving on air. In the case of the LS 600h L, that isn’t far from the truth. This luxury vehicle utilizes an adaptive variable air suspension that uses air hydraulics instead of a coil spring cushion and offers three driving modes: normal, comfort, and sport driving. In addition to the three driver-adjustable settings, the system evaluates and responds to driving conditions and bumps in the road with modulations in air pressure.

While the LS 600h L primarily runs on both electric and gas engines combined, it can also run at low speeds completely on electric power. In this ‘EV’ mode sound is minimal or nil, and emissions are cut to zero. But don’t expect to use this mode to get around town, because it only can be engaged for a half-mile at a time.

The standard features are aplenty in the LS 600h L, as should be expected for vehicles in this price range. And more than any other car in the fleet, the LS 600h L creates an opulent and posh environment for both the driver and passengers.

The standard sound system is the a 450-watt, 7.1-channel, Mark Levinson Surround Sound package that includes 19 speakers and a hard drive that stores up to 2,000 songs.

The seats are covered with what Lexus calls premium aniline leather, with a driver's seat that has power 16-directional movement and two separate power lumbar supports. It appears that there is no excuse to not be comfortable. Because it provides so many configurations, there are three memory settings to save them for you and other drivers.

While most of the optional features from the LS 600 are standard on the LS 600h L, the L adds three optional packages, centered around high-tech gadgets, comfort, and customizability. The least expensive of the three is simply called the Premium Package and includes an automated parallel parking system, rear seats with both climate control and power motion, rear seat side-airbags, and a service similar to OnStar, called Lexus Link.

The Premium Package II takes those features, and then adds a more advanced climate control system with an air purifier, a rear entertainment system with a 9-inch screen and wireless headphones, rear seat audio controls and a cool box, and power rear-door sunshades.

Available through special order is the $12,560 Executive-Class Seating Package II, which not only contains the options from the other packages, but changes the backseat design. The package removes the center seat and replaces it with a fixed console. The right rear seat also boasts power reclining, foot rests and a multi-function massager. The entertainment system gets the upgrade of a DVD player and the exterior gets snazzier 18.5x7.5-inch nine-spoke alloy wheels.

As much as the Lexus LS 600h L pampers its riders, it protects them as well, because it’s easier to relax in the reclining rear seat when you know that the vehicle comes with a Volvo-like approach to safety. Equipped with antilock brakes isn’t enough any more with high-end models, and the LS 600h L adds electronically assisted braking that modifies the braking power depending on the pressure or speed of your foot.

The frame of the vehicle is designed with crumple-zones that minimize the shock of an impact from the front and rear and also has reinforced bars on the doors for side-on collisions. The airbag situation is pretty much covered, with dual stage front bags, side and seat-mounted bags, and even airbags for the driver's knees.

There are a couple of notable options as well, including a pre-collision system that calculates an impending collision and improves brake power and tightens the seatbelts to prepare for impact. Also available is an active power stabilizer system, which measures a multitude of parameters to provide appropriate torque to the stabilizer bars to maximize sway resistance.

Owner commentary on the LS 600h L isn’t as readily available as for more common and affordable vehicles. What was found, however, was a mixed bag. A few power purists wanted more explosiveness from the engine, but in response, those who use the car for long trips and commuting had nothing but praise for the vehicle's smoothness, comfort, quietness, and sound system. The one consistent complaint for the LS 600h L was the lack of trunk space.

Users ranked 2009 Lexus LS 600h L against other cars which they drove/owned. Each ranking was based on 9 categories. Here is the summary of top rankings.