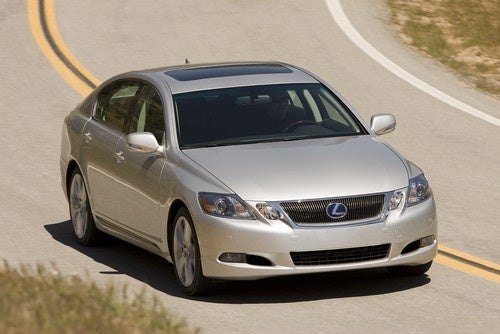 The 2009 Lexus GS 450h combines the athletic handling and refinement of a luxury sedan with the eco-friendly nature of a hybrid and that classic Lexus style.

By blending hybrid and luxury, Lexus had to compromise on both ends, making the '09 GS 450h not as efficient as many hybrids and not up to the standards of other luxury sedans in its class.

Despite the inherent compromises required to make a hybrid/luxury car, Lexus has managed to create a vehicle that delivers the goods on a multitude of levels. The 2009 GS 450h overflows with technology that provides outstanding performance, efficiency, and safety.

If your inner driver can’t quite give up the amenities and performance of a luxury sedan, but your conscience can’t continue to use gas-guzzling engines with poor emissions, then the 2009 Lexus GS 450h, where the "h" stands for hybrid, demands your attention.

This vehicle is full of compromise, technology, and the type of attention to detail, reliability, and resale value typical of a Lexus. The main compromise is that the GS 450h won’t save the environment or your wallet like a hardcore hybrid such as the Toyota Prius, but it won’t drag off the light or handle like a Prius, either. Instead, Lexus has tried to make a vehicle that performs like it has a V8, consumes fuel like it has a V6 (22 city/25 highway mpg), and produces emissions like it has a four-cylinder engine.

The GS 450h offers no compromise, however, when it comes to style. The 2009 GS 450h comes in just one trim and looks like its predecessor from 2008 – sleek lines with a long hood and sweeping roofline all perched on a powerful base. The interior is just as stylish with quality finish materials, an easy-to-use, voice-activated navigation system, and seats that stay comfortable after hours of driving.

When a car is loaded with gadgets and systems like the GS 450h, an owner may get nervous about potential repair costs. No need to worry here. J.D. Power and Associates gave this vehicle a score of 10 out of 10 on its Predicted Reliability scale. And Lexus has backed the car with a 48-month/50,000-mile basic warranty, a 72/70,000 powertrain warranty, and an eight-year/100,000-mile warranty for many of the hybrid components.

The GS 450h has two power sources – a 3.5-liter V6 gasoline engine and a high-output, permanent-magnet electric drive motor. The vehicle can run on either or both of these sources as necessary (it’s electric-only when starting, driving slowly, or in low-load driving), and combined the two sources can produce 340 horsepower. A 288-volt DC Nickel Metal Hydride battery pack charges the electric motor. Automobile Magazine called the hybrid system “highly evolved.”

Lexus’s Dual Variable Valve Timing with intelligence optimizes the intake and exhaust valve timing to increase torque at lower speeds and horsepower at higher speeds for excellent midrange acceleration while improving engine performance, fuel economy, and emissions along the way. Lexus says the GS 450h can go 0-60 in 5.2 seconds.

An impressive electronically controlled Continuously Variable Transmission receives all of that evolved power and transfers it to the rear wheels of the GS 450h. This ECVT does not use fixed gears like traditional transmissions. Instead, it can produce an infinite number of gear ratios, maximizing performance in many conditions, increasing acceleration, reducing shift shock, and, once again, improving fuel economy. What’s more, the ECVT captures kinetic energy during coasting and braking and uses it to charge the hybrid battery, a process also known as regenerative braking.

Lexus’s Adaptive Variable Suspension helps deliver a ride that has left a trail of impressed drivers in its wake. The AVS system can be set in Sport or Normal and then adjusts the suspension according to road conditions and the driver’s steering and braking movements. But that’s hardly the end of the technology that gives the GS 450h what Kelley Blue Book called “impressive driving credentials.”

Lexus’s Vehicle Stability Control can sniff out slippage during cornering and correct it by adjusting engine power and braking. The Traction Control senses wheelspin and compensates by transferring power to the wheels with the best grip. These two systems, plus the AVS, steering, and Antilock Braking System, are all governed by Lexus’s Vehicle Dynamics Integrated Management system.

All of that technology rests on 18-inch aluminum alloy wheels with 245/40ZR18 summer tires or optional 245/40ZR18 all-season, run-flat tires.

One of the few common complaints about the GS 450h is its steering. Some like the easy movements and sensitivity of the electronically assisted Variable Gear-Ratio Steering, but some find it too effortless and lacking feel.

The real wood and leather found on the seats, dashboard, doors, steering wheel, and center console speak to the luxury of this vehicle’s interior.

The front seats are heated and ventilated and offer ten-way power control that will remember your favorite setting with the Lexus Memory System. Some taller drivers have complained of slightly cramped quarters in these front seats, however, and taller passengers may be constricted in the rear seats. Five average to small adults can certainly ride comfortably, but four is probably a better number due to the raised middle of the back seat.

Power everything is standard here – windows, locks, mirrors, rear sun shade, and moonroof, to name a few. And there are some extraordinary options as well – adaptive cruise control that maintains the distance between you and the car in front of you, a voice-activated DVD Navigation System, and a Mark Levinson audio system that will satisfy even the most ardent music buffs.

The hybrid battery is located in the trunk, so cargo space is not a strong suit for this car, which has just 7.5 cubic feet available. The interior storage compartments are well-placed and fit seamlessly into the elegant interior, although some critics would like to see more of them.

The Vehicle Dynamics Integrated Management system and all of the technology it controls will go a long way in helping the GS 450h avoid collisions, but if it can’t, Lexus has provided plenty of other safety features. The driver and passenger are both protected by dual-stage front, side seat-mounted, and side curtain airbags. The rear seats have side seat-mounted and side curtain bags. There are also crumple zones in the front and rear and side-impact door beams. And to help avoid fender benders, the GS 450h has a backup camera and electronic park assist.

The four-wheel, ventilated, power-assisted disc brakes are not only enhanced with four-sensor, four-channel ABS, but also by Lexus’s Brake Assist and Electronic Brakeforce Distribution. The Brake Assist helps in a panic stop situation, while the EBD regulates the amount of fluid pressure to the brakes to enhance control.

There is also an optional Pre-Collision System that can determine when a frontal crash is unavoidable and then sets in motion the appropriate responses from the vehicle’s various safety systems.

Owners love the way the GS 450h handles, especially when they consider it’s a hybrid. There’s also universal praise for the car’s reliability and refinement, not to mention appreciation for just how much attention it gets on the street. There are also plenty of comments about the car’s quiet ride and comfortable seats, except from taller owners.

Reviews from owners over 6 feet tall have generally included complaints about headroom. Another common problem is the lack of cargo space, though people do understand that this is simply a matter of needing to accommodate the hybrid battery and so simply part of the deal when buying this vehicle.

Have you driven a 2009 Lexus GS Hybrid?
Rank This Car