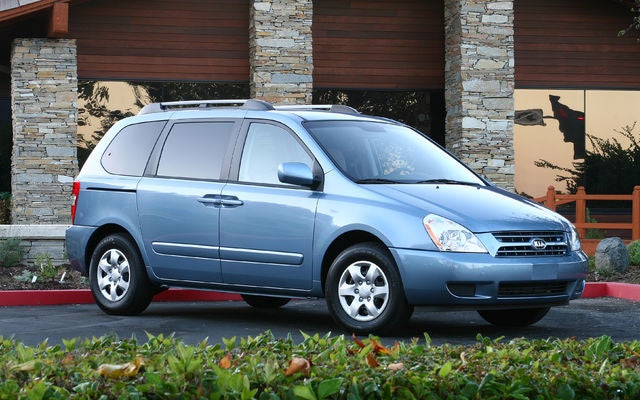 The 2009 Kia Sedona offers a wallet-friendly base price, oodles of standard features, decent handling, adequate performance, unimpeachable safety test results, spaciousness, seven-passenger seating, and a warranty that has competitors scrambling to catch up.

Utilitarian and family oriented, the 2009 Kia Sedona places value and substance above style and comfort, which is fine for the budget-minded. While Kia is making strides to include more technology and convenience features in the Sedona, it’s clear that they have a considerable ways to go before this mini equals Honda’s Odyssey or Toyota’s Sienna.

For those families on a budget, the 2009 Kia Sedona minivan waits at the end of their rainbow. This often-overlooked treasure features standard seven-passenger seating, an unparalleled safety record, plenty of standard comfort and convenience features, a roomy, if not luxurious cabin, and V6 power. The 2009 Sedona comes in three trim levels, the Base, midlevel LX, and top-shelf EX, each of which is offered in front-wheel-drive only. The Base Sedona is some 13 inches shorter than the LX and EX trims, with a wheelbase that’s 5 inches shorter. This may make for a tad better maneuverability in tight quarters, but also reduces cargo capacity for the Base to 121 cubic feet with the second-row seats folded and third row removed. The longer LX and EX, on the other hand, offer 142 cubic feet of cargo area with their seatbacks – all split-folding – down.

With one of the best warranties in the business and a base price that causes folks at Honda and Toyota to cringe, the ’09 Sedona brings better-than-average family transportation to just about any family anywhere. But, a few words of caution: The Sedona is not the most economical minivan on the road, nor is it the most powerful. Ride and handling are merely adequate, and cabin materials are described as lackluster, at best.

The 2009 Sedona’s main competitors are Honda’s Odyssey and Toyota’s Sienna. Though each of these offers more refinement than the Sedona, this refinement comes at a significantly higher price. For 2009, the Sedona receives standard satellite radio reception, as well as MP3-capability and a USB connection, standard across the line, and available DVD navigation. The Sedona is aimed at a certain economic niche, and more often than not, it hits its mark. 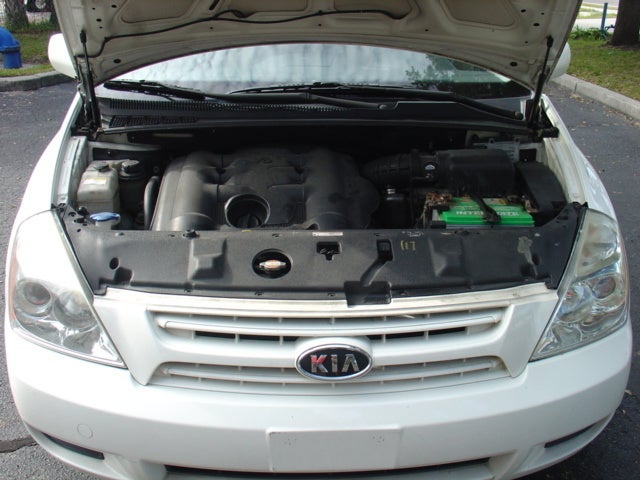 The sole engine and transmission available for the 2009 Kia Sedona lineup consists of a DOHC 3.6-liter V6 and five-speed auto-manual transmission. This combination is capable of 250 hp at 6,000 rpm and 253 lb-ft of torque at 3,500 rpm. Towing capacity for the Sedona is rated at 3,500 pounds when the available trailer hitch is selected, and fuel efficiency is estimated by the EPA to be a tepid 16/23 mpg.

A 0-60 time of between 8.4 and 9 seconds is claimed by various sources. However, several reviewers note reluctance on the part of the Sedona’s V6 engine to being hurried in its acceleration. More than a few reviewers are quick to mention that the Sedona has more than enough oomph to cruise comfortably with a full load of passengers, even when hauling a small trailer.

Professional reviewers also mention a most annoying lag in the five-speed auto-manual transmission’s downshifting capabilities when tasked with merging and passing. It’s been suggested that the “manual” feature of this transmission be utilized when immediate downshifting is needed. When shifting, the five-speed is described by virtually all reviewers as fluid and graceful.

Though not exactly sedan-like in its ride characteristics, according to most reviewers, it’s noted that the 2009 Kia Sedona is no worse in this respect than most of its competitors. Minivans are notorious for unseemly corner lean, and the Sedona is no exception. Small pavement imperfections are handled well, according to reviewers, but larger bumps and uneven road surfaces can be a challenge, with the 17-inch tires standard on the Sedona EX doing little to alleviate the problem.

Based on a platform shared with its Hyundai Entourage cousin, the Sedona sports a four wheel independent suspension, front and rear stabilizer bars, MacPherson front struts, and a multi-link rear end. The Base and ES Sedona trims are equipped with standard 16-inch steel wheels, while the EX boasts 17-inch alloy wheels. Despite this above-average suspension system, professional reviewers note a certain heaviness in the Sedona’s handling that takes a bit of getting used to. Additionally, steering feel is also described as adequate but far from engaging. Keep in mind that this is a minivan, not a Lamborghini.

Options for the Base 2010 Sedona include the Convenience Package with roof rails and floor mats, while the LX offers available rear-seat DVD entertainment and a Power Package featuring power rear sliding doors and power liftgate, as well as rear backup sensors. The Sedona EX adds an optional Luxury Package featuring heated leather seats, power-adjustable pedals, a power sunroof, and rear-view camera system, as well as a Premium Entertainment package with 660 watts of audio power and a 6-CD changer. A stand-alone offering for the EX is an available touch-screen DVD navigation system.

Reviewers note that the 2010 Sedona offers a reasonably spacious cabin with plenty of storage spaces. The only serious glitch mentioned is a common one with this type of vehicle in that third-row seating seems to be intended for only the smallest of people, in both access and comfort. Controls and gauges are mentioned by professional reviewers as being easily reached and well marked.

Reviewers describe the Sedona’s cabin as only marginally quiet, with wind and road noise becoming almost intrusively apparent at highway speeds. Additionally, nearly all reviewers express disappointment with Kia’s use of sub-par plastics, trim, and fabrics for the otherwise commendable interior.

Virtually all reviewers point out that the National Highway Traffic Safety Administration (NHTSA) gives the 2009 Sedona five stars in all categories except rollover testing, in which it earns a still-respectable four stars. The Insurance Institute for Highway Safety (IIHS), meanwhile, gives the Sedona its highest rating of “good” across the board. Additionally, the IIHS awarded the ’09 Sedona a “Top Safety Pick” designation.

While the 2009 Kia Sedona is considered by most owners a worthy and versatile family wagon, there are a few issues. A distinct lack of get-up-and-go is one of the most common complaints owners have with the Sedona. Uncomfortable seats, a lack of any sort of refinement in the cabin materials, and intrusive wind and road noise also disappoints a number of owners. Some owners complain of a rather rough ride in the ’09 Sedona, while others find that it smooths out all but the roughest surfaces.

Value, however, is what owners like most about the ’09 Sedona, as well as its over-the-top warranty protection. Price, mileage, reliability, roominess, and a plethora of creature comforts, not to mention numerous and generously sized cabin storage cubbies and the Sedona’s family-oriented safety image, continue to draw praise from owners.

tdlanders We have a 2009 Kia Seadona Base with 120K on the clock. So far no problems, knock on wood. Regular oil changes, plugs, filters, brake pads and rotors (HD up grade), tires and timing belt is planed while the weather is still good. Grate little van and as far as get up and go it moves just as quick or quicker than other vehicles at the 4500+ weight class.

hockeyjockey50 Hey All, Just looking at purchasing a 2009 Kia Sedona EX luxury package 98,680 mi, good condition. Seller is asking $8500 bottom, we think that $8000 is more than fair. Took it for test drive and it runs like a kitten. The dealership is going over it before it runs out of warranty at 100 000. Thoughts on price? Is he asking too much. Been on the market for over 2 months.

Have you driven a 2009 Kia Sedona?
Rank This Car

2009 Kia Sedona has a ringing sound coming from right front when I’m rolling down the road. Happens on Highway as well as low speed (like parking lots). Sound stops when I touch the brakes even lig...

I have a 2009 Kia Sedona with the check engine light on. The code it throws is for a bad cam shaft. We replaced that but that didn't fix the problem. We have noticed that we get reduced gas miledg...

While driving my sedona at any rate of speed it will suddenly stop accelerating. The engine is still running but pushing on the gas does nothing. Took it for a engine light reading and replaced tp...

284 views with 4 answers (last answer about a year ago)

Why is my van doing this