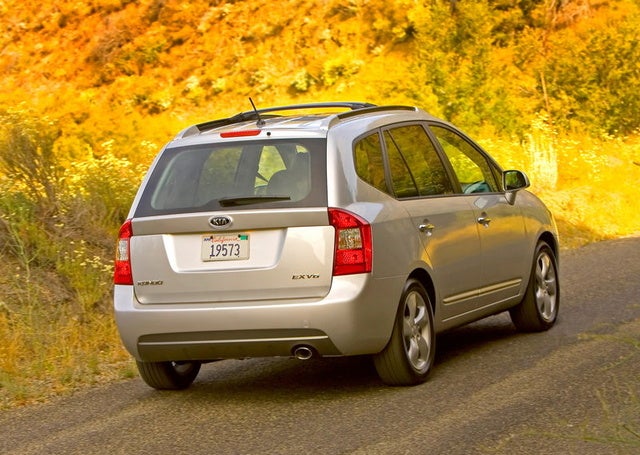 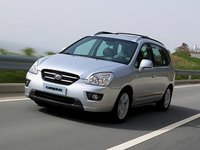 The Kia Rondo surpasses not only its competition but itself with regard to value, and in 2009, with added power and a navigation system for the EX, the Rondo is an even better deal.

Small complaints with regard to durability and 2009's small power increase to the Rondo's already woefully inadequate base engine do nothing to combat the negative image Kia has been fighting for years.

There are simply no two ways around this one: The 2009 Kia Rondo's four-cylinder engine is just inadequate. Small gains in economy just don't justify its lack of power in almost all situations. While the features offered in the EX are quite nice, the LX and even the Base trims are still quite well-equipped, and all are great values for the price.

The FWD, midsize Kia Rondo is a step up from the Kia Spectra5 and lands just below the Sorento, with five trim levels. The Base trim is available with a 2.4-liter inline four cylinder (I4), while the LX and EX trims have the additional option of a 2.7-liter V6, with standard four- and five-speed automatics, respectively. The Base trim is new for this year, as well as a navigation system for the EX trim. Additionally, a power increase comes with both engines.

With a standard capacity of five, the EX has the option of a third row that practically increases seating to seven, even for an additional two adults. This is a welcome change from many third rows that seem suitable for personals or preemies, but never people. 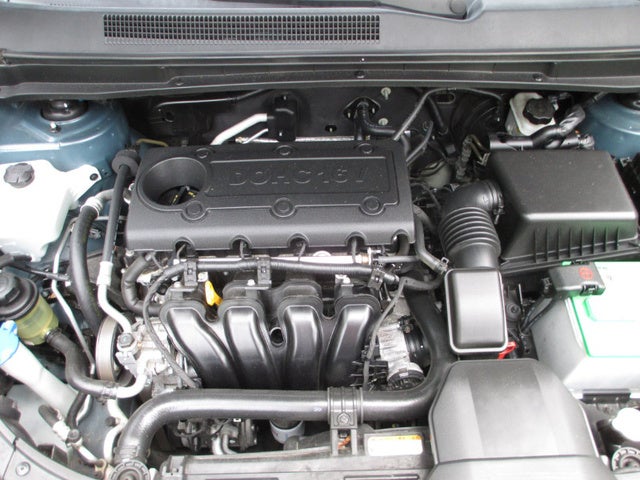 Both trims are available with either a 2.4-liter, 175-hp I4 or a 2.7-liter, 192-hp V6. These engines are available with a four- and five-speed automatic, respectively, and have increased horsepower over last year - the four getting an additional 13 and the six receiving an additional 10. While these are welcome increases, the Rondo is still underpowered, especially with the four-cylinder, which struggles in many situations, sounding quite ragged while doing so. Recommended for regular-grade gasoline, the four achieves an EPA estimate of 20/27 mpg, and the six manages 18/26, making the gains of the four hardly worth its lower power.

For what it is, the Rondo handles competently, with only slight wallow and lean at speed. As a FWD vehicle, handling can be deceptive, especially for those who are unexperienced or in conditions that fail to tax the suspension, but that said, the Rondo seems compliant and comfortable in most situations. Don't expect sports-car handling from this midsize wagon, and you won't be disappointed.

Overall, the interior of the Rondo has been well-received, with some small complaints. It offers plenty of space for even taller drivers in comfortable seats that provide a feel, along with the large windows and high roof, of being almost perched above the road. This, along with the large, well-placed gauges, have garnered praise for the Rondo with regard to visibility.

Noise is kept well under control from both the road and wind, although the four-cylinder sounds ragged at anything other than idle. Some surprising aspects of the Rondo include an accessible and practical - even for adults - optional third row, and a material and build quality that exceed its price point. Cargo space is additionally surprising, with the third row, second row, and front-row passenger seat all folding flat, creating enough space to carry 8-foot 2x4's with the rear hatch closed, which is large and low enough for easy loading.

Kia's low price undersells the Rondo's attractive list of standard safety features - four-wheel antilock disc brakes, traction control, anti-skid, as well as front and curtain side airbags. With these features, the Rondo has achieved NHTSA safety ratings of five stars in all tests other than rollover resistance and side impacts involving rear passengers, in which the Rondo scored four stars.

The Kia Rondo has earned a spot on many "Best Value" lists, and owners seem to agree, being very pleased with the features and quality the Rondo offers. However, the four cylinder has been a disappointment, even with this year's power increase, and some owners have found that materials aren't holding up, helping to bolster Kia's negative image as a "disposable car." Some have complained that loading and unloading even typical cargo in the back has worn out the carpets in less than a year, and upholstery has seen similar complaints. Otherwise, owners have been quite impressed with overall build quality and materials, especially for the price.

gracee59 Has anyone had problems with the ignition firing but not actually turning over? this car has only 30,000kms?

Krystal Can anyone tell me where the Map Sensor is located on a 2009 Kia Rondo?

Have you driven a 2009 Kia Rondo?
Rank This Car

Do I have spark plugs in this car ??

How Do You Change Out The Headlights On The Kia Rhondo

right headlight has burned out and cannot find how to change it in the manual that came with the car.

71 views with 3 answers (last answer about a year ago)